Geddy Movin' On Up

As you know, this is your source for all the latest in Rich Gedman news. He's moved up, from short-season A ball to high A, as he'll be the hitting coach for the Salem Red Sox in 2012. Moving up, but moving out of the area, unfortunately. But hey, it's all part of the plan of seeing Geddy back at Fenway as a coach one day.

Scutaro: gone. He was one of the few September bright spots. But apparently our solution to a shitty end of the season is to let the exact wrong people go. I will continue to assume they've got a plan, though. It's nowhere near April yet. 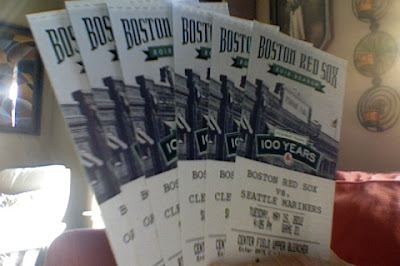 No pocket schedule included! NOT as usual! (Though I did get the big 2012 magnet schedule during the last homestand last season. It's round this year.)

As they told us, the tickets are more 1912-y than usual. I appreciate the older, bare-bones, mostly-text look, but I don't like how I kind of can't tell the games apart. I'm used to having the opponent's colorful logo on there, so you at least know immediately if you've grabbed tix for the wrong game out of your stash. I also don't like how all the tickets are the same, as opposed to seeing which player or photo you'll get, and trying to "collect them all." But these are not problems that will affect me, so that's good. Unless I bring the wrong ticket to a game since they all look exactly the same.

Speaking of tickets, the "Road Trip" starts tomorrow. They've removed that much-maligned "only allowed to go to your state's specific game" policy, so that's good. It says once you get your voucher you can get four tickets (presumably to any game except the "special" ones). Here's the info--check it to see which former or current Sock will be in your state. It's also been confirmed that 1/28 is the big ticket sale (as I totally told you months ago). The only ones being left out are Yanks and Opening Day (and Monster Seats, etc.), which will be lottery-only as usual.

On Valentine's Day, 1819, Christopher Sholes was born in Danville, Pennsylvania. Almost 200 years later, Yu Darvish has signed a contract to play Major League Baseball. And finally Don Wert may have a friend.

Sholes invented what we now know as the universal or QWERTY keyboard for the typewriter he patented (#79,265) in 1868. Between then and now, the only person to play Major League Baseball with a last name that's spelled out on this type of keyboard is Don Wert.

Like Sholes, Wert was born in Pennsylvania--in Strasburg, a short drive from Danville. Incredibly, the towns are exactly 79,265 Roman double-paces apart! 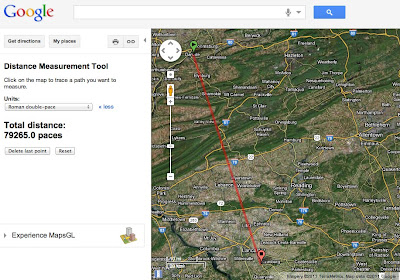 And so it was that on May 11th, 1963, Don Wert made his major league debut, becoming the only true keyboard baseballer, and connecting him with Sholes for eternity.

Three years ago, I started looking for possible names that could contend with WERT. Of course, a person with a keyboard-spelled name would have to not only exist, but be a ballplayer, and make it to the majors. After a few failed attempts, I typed YU (with ease, thanks Christopher Sholes!) into the ol' Internet Findin' Machine, and discovered that it was indeed a name, but more importantly the name of an already well-known pitcher in Japan. (I wrote a post about it at the time.) That pitcher was Yu Darvish.

In the three years since that post, it became more and more apparent that Darvish was headed for the bigs. And now, 49 years after Wert set the standard, Yu is officially a Texas Ranger, and should make his debut a few months from now.

But will Yu join Don in history once he throws his first pitch in the U.S.? Darvish (which came from Darvishsefad) is the family name, but in Japan, that is listed first. Ichiro is not the family name, but Suzuki has it on the back of his jersey. But I think that's because he's known only as Ichiro, like Cher or Jackee. Yu Darvish does have "Darvish" on his back when he plays, but still, Yu is his "last name," albeit not the family name, in Japan. (I went through this in the 2009 post, but now we're mere months from someone having to make the official decision!)

Even if you don't think Yu Darvish belongs in Don Wert's exclusive club, he at least gets into the "first name spelled on keyboard" group, along with Ty Taubenheim and Ty Wigginton. (The only MLB Ty's with the full first name "Ty.")

Also note: the Korean Baseball Organization has had plenty of players with the last name (or is it the first name?) Yu in recent years. It's only a matter of time before MLB is a virtual Yu-fest.

I like to joke about how Yankees fans/announcers occasionally act like the on-field successes of Derek Jeter have an impact on world events.

But every once in a while, someone actually crosses into that territory.

In a piece that mentions Adolf Hitler, Muhammed Ali, Jackie Robinson, and the Civil Rights Movement, Wallace Matthews writes that Dr. Martin Luther King's "I Have a Dream" speech "could well have been" about then-unborn Derek Jeter.

But the most appalling part of the article is when Matthews claims that not even Red Sox or Mets fans can hate Derek Jeter.

I suppose that's why we boo him every single time his name is announced.

This goes along with Michael Kay's theory that "boos on the road are the same as cheers at home." Classic "the Yankees win no matter what" behavior. This is a team that plays their victory song even after they lose, remember. What causes this mentality? Are people just so afraid of failure or disaster or being wrong that they'll come up with any excuse to make it seem like nothing bad ever happens? What kind of a life is that? If you love Derek Jeter a whole lot, no matter hard it is to believe that anyone could not love him, you still have to admit that I don't love him. Go ahead and ignore all the negatives about Jeter and tell us all how great you think he is, but don't speak for the rest of us.


Thanks to Allan Wood for alerting me to another masterpiece from the king of comedy, Wallace Matthews.

"Chicago, Jan. 8--A rumor is going the rounds here that Harry Lord, captain of the White Sox, and peerless third baseman of the American League, is to return to his old love this year and once more cavort around the third cushion for the Boston Red Sox.

The consideration is said to be Tris Speaker, the great Boston centre fielder." 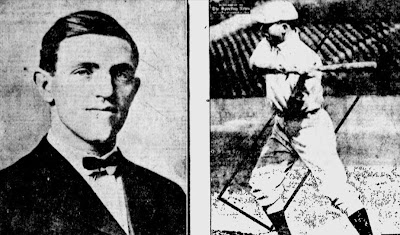 The Red Sox didn't take the bait. Speaker would go on to lead the league with a .464 on-base percentage for Boston in 1912, leading the team to a World Series title. (He'd end up topping that mark four times after that.) Tris also was part of the 1915 championship team, before being traded* before the 1916 season. After that, he'd put up stellar numbers for 12 and a half more years, and go into the Hall of Fame in 1937. To this day, no major leaguer has more doubles than Speaker. Only four have more hits.

A few weeks after the Lord-Speaker rumor, the Indians offered George Stovall to the White Sox. When Chicago found out Cleveland wanted Harry Lord in return, manager Nixey Callahan laughed and said he wouldn't trade Lord for the whole Cleveland team. (Which shows you how highly he regarded Speaker.)


*The Red Sox got Sad Sam Jones for Speaker--he would be a key pitcher on the 1918 championship team.

You play these things yet?