After a year off from the Section 36 scavenger hunt, I think I'll be participating again. Try it. See if you can beat this former champion.

Couldn't Get This Other Thing Done....

...so here's a picture of Amazing Larry and Danzig waltzing instead: 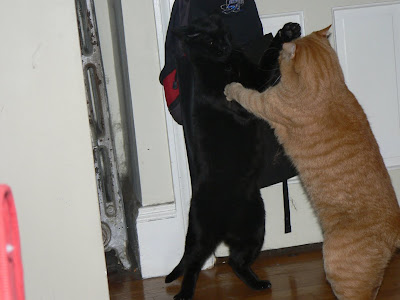 1. I wrote to the Paw Sox today asking if they knew the other team in the Futures Would-Be Doubleheader. They answers promptly and succinctly: "It will be Lowell." Okay, then. I guess I have to believe that, even though Lowell and the Red Sox have yet to mention it, and Lowell is hyping a 38-game season ticket plan which includes a game that day in Lowell. So I guess it's Pawtucket vs. Buffalo, and Lowell vs. Hudson Valley. (If the person who answers the general e-mail for the Paw Sox knows what they're talking about.)

2. On New Year's Eve, we were tuned to a channel that played Cee Lo Green's live rendition of "Imagine," about two minutes before midnight in Times Square. I'm fairly down with CLG and have had that "Fuck You" song stuck in my head for about a year and a half. Compared to today's pop star alternatives, I was glad that he was the one singing that song. I'm not a Beatles guy, but I love what Lennon stood for, and I love the lyrics to "Imagine." (He did things in his personal life I wouldn't do, like doing drugs and cheating on his wife but I'm not talking about that stuff.) As the pop-culture news should have told you by now, though, Cee Lo decided he was going to pull a Ronald Reagan and take someone else's art and alter it to make it mean the exact opposite of what it says. John Lennon imagined no religion. Cee Lo Green imagines ALL religions. Which one need not imagine, because they're already there, necessitating some to imagine them not being there. Man, was I pissed. And just at that happy happy joy joy moment when the ball's a-dropping and The Twilight Zone's a-playing, too.

Instead of writing a profanity-laced tirade to you my readers...I wrote one to some friends. And now this is the level-headed me telling you about it. I know Cee had good intentions here. I know he meant that we should love everybody regardless of faith and I agree with him (though I include "or lack of faith" and I would even if I was religious). And if he wants to write a song that says that, he should go and do it. But this is someone else's song, and whether anybody likes it or not, its writer is talking about how he feels we would all be better off without borders, materialism, war, and, religion. If you have a problem with that, or are somehow confused about the meaning of a very straightforward lyric, you might want to sing a different song!

I'm not saying he shouldn't be allowed to do what he did. I'm saying I'm pissed at him.

I'm not saying we should judge people based on which religion they practice. I'm saying "Imagine" is not about that at all.

The Nod: Celts From Even Higher Than Usual

For some reason, the Celtics sold their $150 promenade level tickets to this game (and this coming Wednesday's) for 40 bucks. When you click "price range" at Inglorious TicketBasterd, they're listed at the regular price, but find them on the seating map and you'll see they're 31 plus fees.... 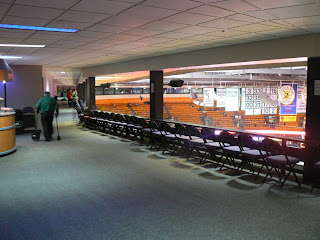 I think this level is usually for groups. There's one row, and you get padded chairs. (Oddly, they're just a mishmash of office-type chairs, some with armrests, some with wheels in different colors. Eventually my dad and I went to an empty area, picked out our favorite chairs, and put them next to each other. See video above for that view.) 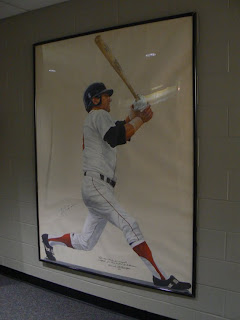 The first thing you see when you get out of the elevator on level nine is this Yaz drawing. Unfortunately, there isn't much stuff like this up there, aside from a row of old Bruins pictures. Mostly it's just blank walls behind you. View from the corner. The seats are kinda scary, as you're just hanging over the balcony. But that does mean you're closer to the court (albeit a little higher up), especially from the side-court angle. 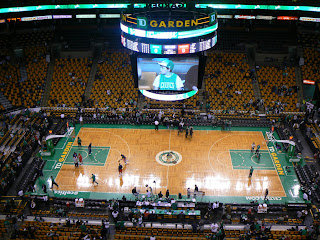 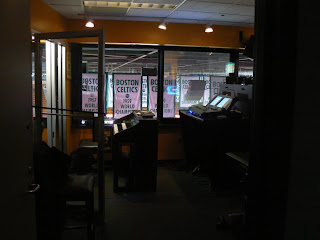 We took a walk all the way around the top ring, and came across this organ room. All the music is pumped in now so they don't seem to be using these keyboards. 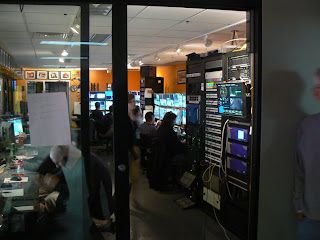 This other room of craziness. 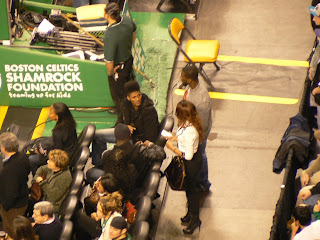 I figured these three guys were famous since people kept getting pics taken with them. Thanks to the Kid/Play haircut, I was able to figure out later that that one guy is Underwood of the Patriots. There may or may not be other Patriots in this picture. 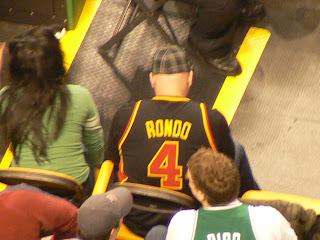 Did this guy get this from the discounted wrong colors/wrong number bin or am I missing something? 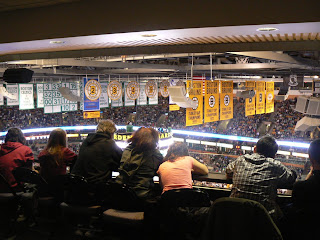 Fans looking on from our special level of awesomeness. 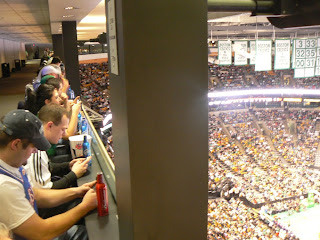 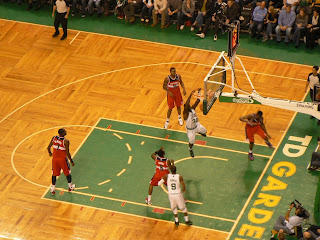 Bass with the two-handed jam. 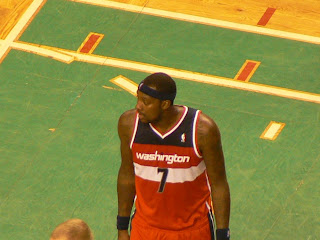 The Wizards with a tribute to their old ammunition-advocating uniforms. 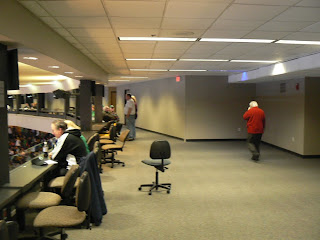 Hey, who's that up in the promenade? 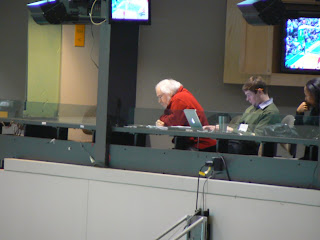 It's Fenway Park PA guy Cole Bean! Weird. (I have to assume he was there to give tips to the Celts' PA guy. Or maybe get some tips.)

That's all. The Celtics won but didn't cover.

Close, But No Million

Remember how I gave the WS contest winners a chance at a million dollars in a state lottery raffle thing? Well, the drawing was last night. The ticket did not win the million dollar prize. But it was very close on one of the 5 $10,000 prizes--within 150 out of 120,000! There's a second chance drawing which I have entered the ticket into. That whole deal will be over by early February, at which point I will post a picture of the ticket to prove you all actually had a chance at a million bucks.

Maybe I'll do a Super Bowl contest or something. Stay tuned.

Here's the latest on my borderline-obsessive speculation about Futures at Fenway 2012:

Red Sox schedule currently doesn't have any notation of the game(s) at all.

Portland is already selling tickets to their home game that day, so they're out.

Greenville is on the road that weekend.

Salem has a home game scheduled that day and this release about their schedule doesn't mention a game at Fenway.

Lowell has a home game scheduled that day, and their season ticket plans imply you'll get 38 home games, and that August 18th game is apparently one of them.

So I don't see any other option for that second game, which lends revived, clear-watered credence to my original theory that they're only having one game this year--the Paw Sox-Bisons one. That's what the Red Sox schedule initially showed, before switching to the cryptic "Red Sox vs. Red Sox," and then removing it entirely.

However, Red Sox, if you're reading this, might I suggest again that you have an OLD-TIMERS game as the second game that day. Future Meets Past at 100-year old Fenway Park in 2012! Do it! (Bill Lee could play in both games!)