I Must Be Half Sane

Inspired by PopSpots--which I wrote about here--I figured I'd try my e-hand at figuring out an album cover photo location. PopSpots had already done two Ramones records, so I looked through some more to find a shot of them in NYC, and I found one: 1987's Halfway to Sanity. (Which I bought a cassette of for cheap in 1993, before proceeding to play the hell out of "I'm Not Jesus" in my dorm room.) Here's the cover: 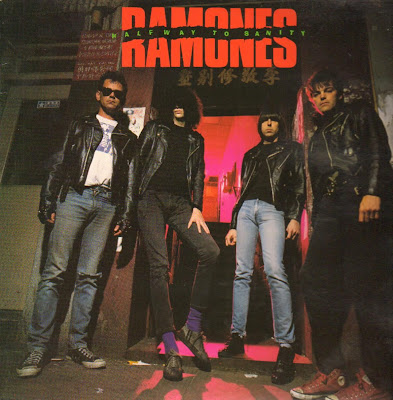 The first thing I did (after unsuccessfully asking my long-time pal and supposed Chinese speaker Chan what the writing above the door said) was get some info about the photo. I found an alternate photo from the shoot in the book "I Speak Music," along with a great story about it all, one page before that. The story, by photographer George Dubose, mentions "a certain address on Mott Street in Chinatown."

Before I go any further, I'll show you my conclusion. Below at left is the alternate photo from the cover shoot (copyright George Dubose), and at right are the doorways as they appear today (copyright Google Maps), at 16/18 Mott St., New York City:

Now back to the search. I knew the pic was taken on Mott Street or somewhere near it within Chinatown. (They could have initially met on Mott and then walked to the first and what turned out to be only location.) Thanks to the alternate photo I was able to read the doctor's name on the red sign. I looked him up and saw he recently had a practice at 230 Grand St., but I didn't find the doorways there.

So I started going all around Chinatown on Street Views, looking for two adjacent doorways. It seemed to me like this was the line between two buildings, just to the right of the red signs. So I kept looking for that set-up: metal doorway at right edge of one building next to doorway at left edge of adjacent building. There were other little things, like the way the left building required a step up at ground level and was very slightly in front of the right building, and the wide "bricks" of the building on the right, which of course might not look like that now. But I figured that metal doorway has to look the same, if maybe painted, provided the building is still standing 25 years later.

After going up and down Mott St. and several others, often with doorways obscured by trucks, I had nothing. A lot of the doorways had a certain ornate pattern, but I couldn't find this specific metallic one with the grooves starting at a certain height.

The next day, I took another look at the map. I realized there was a little piece of Mott St., the southern end, that I might not have checked. So I went to the corner of Mott and Pell, and started going south on Mott. Even though the brick pattern is totally different now, the first thing I noticed about Hop Lee restaurant at 18 Mott was the wide bricks. As I focused in on that, it hit me that I was staring right at my metal door frame! 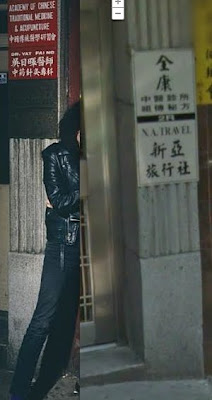 I knew from my extensive tour of Chinatown that this type of frame appears nowhere else, and that this had to me the spot. Still, I kept inspecting the spot and things matched up...and then, duh, look what's still there, right over the door! 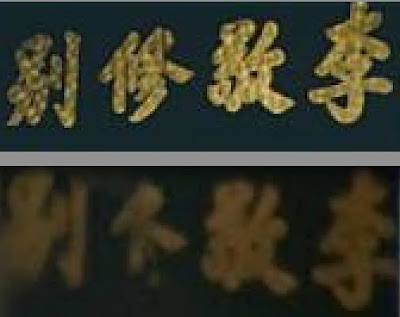 These are four of the five characters, from the Ramones pic on top, and from Street Views at bottom. (The second character on the map has a slice through it where two images are merged together.) If anyone can read Chinese, please don't even tell me if this actually says "16 Mott Street," as that would mean I went through a lot of unnecessary trouble. Okay, really fun trouble, actually.

So the sign proves it beyond a doubt, even if the sidewalk at the left edge of the pic now seems to go slightly uphill, unlike in '87. The story of the shoot also mentions a restaurant, which was either Hop Lee or one of its predecessors. And without that alternate photo, I may never have found it, since the unique metal grooved doorway is obscured in the album shot. Not knowing if the sign over the door was still there or not, I had to use something else to search by. And even if I did know, it wouldn't have been easy comparing Chinese characters with ones over every door in Chinatown.

Below is the pic of the "Halfway to Sanity spot" from Street Views by itself. You can "walk around" and get a better view of that one guy's skateboard. He has no idea he's standing on a famous piece of real estate. Well, famous now.

Know what's weird? When I looked down Mott Street in that one spot, it looked very familiar. The way the road curves left, odd for Manhattan--I know I've been in that spot. I remembered that Chan and I hung out in Chinatown when I lived in NYC one time, so I searched my own blog for "Chinatown." And sure enough, I did a post about that day in September 2005. We had gone down there looking for an ice cream shop. That post is great, it's got Yankee/Jeter/Kay-bashing, and a nice Orioles logo. Jesus, Cano's been around longer than I thought! Anyway, I love how this blog acts as a diary as well as a...whatever it's supposed to be. It's changed a lot, yet it hasn't changed at all.

This is Bob Egan from PopSpots. Good job on tracking down the Ramones cover. I can see you enjoyed the "search' as much as I do because you shared the point-byu-point with your readers. I also enjoyed reading that you found someone to read Chinese lettering - I had to do that in a search in Chinatown too -- and that you looked for outtakes to help you find the site. Those are all the tricks of the trade. By the way sometimes I go to ebay and type in the name of the album plus "promo" because the newspaper and magazine advertising that went with the albums often uses outtakes. I ran across your link while I was on twitter and typed in #popspots.
Best regards,
Bob Egan

Great to hear from you, Bob! Your site is incredible. I do a lot of this type of detective work for baseball photos--your site inspired me to do the same for albums. Or at least this one. Thanks!

Thanks, I’ll be there soon’

Two of my favorite things are connected: Hop Lee Restaurant where I have many fond memories and still like to go; and The Ramones! Gana ganan yay!

Cool! So glad you saw this all these years later. (The Street Views has obviously changed since then, so the skateboard kid is gone, at least on the pic that appears in this blog entry.)