Here's how we're gonna do this. I'll do the pics in this post and the vids in a later one. With one random exception. Go. 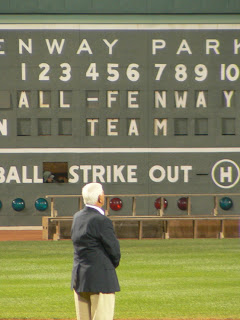 When my mom saw my pics and read about the 2006 home finale (Hansack's 5-inning no-hitter), she said she wanted to be there for the next one. So we made it a tradition to go to the regular season finale together every year. Not that we've completely kept up with it, or that we ever said out loud that it was an official tradition, but every year now I buy tix for the last game and if she can make it, she goes with me. This year we lucked out that it was the All-Fenway Team ceremony (though I would have gone anyway once I found that out). It was also what we thought was rookie hazing day, so we decided we'd stay till the end and then watch the players board the bus. Above, Yaz. 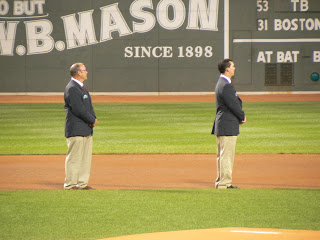 They had the top 3 at each position. Here's the official Red Sox legend of this blog, Rich Gedman, with another favorite, Trot Nixon. 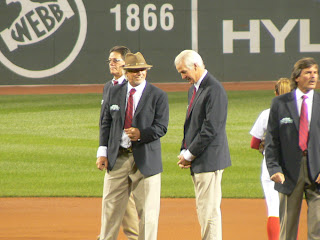 Bill Lee in the hat. Next to him, Jim Lonborg. Behind him, Carlton Fisk. At right, Dennis Eckersley. 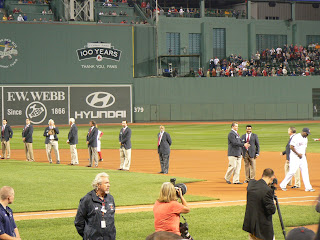 Pedro Martinez, Luis Tiant, David Ortiz, and more, including a player we booed who shall, along with another horse-riding dick, remain nameless (and countryless). 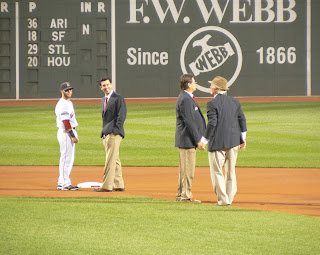 I actually didn't mean to post this yet, but somehow it snuck in when I uploaded a bunch of pics at once--which is why it automatically went to Google Video instead of YouTube. Whatever. It's Don Orsillo doing the "9 rules of Fenway" and finding them quite amusing. You can also see co-emcee Joe Castiglione briefly at the end. 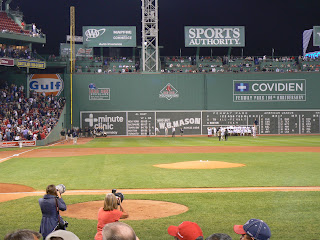 Living members of the All-Fenway Team posing for their picture. (At bottom left is Reuters photographer Jessica Rinaldi. She's the one who loved my "The Media is Toxic" T-shirt on Anti-Media weekend and kept taking pics of herself in front of it.) It was cool seeing all those guys. I never really got close-ups because they left through the left field side door. But between this and the 2004 team returning the night before, I got to see a lot of awesome guys. Dave Roberts even did a separate video for the two different teams, one shown each night on the board. 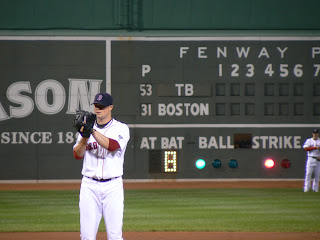 Our seats were in the back of the bleachers, but we stuck around in the field boxes for a couple of innings. Here's Lester on the mound. 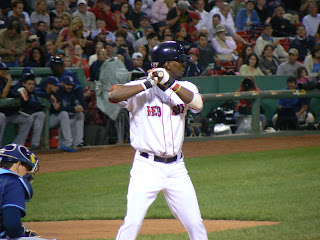 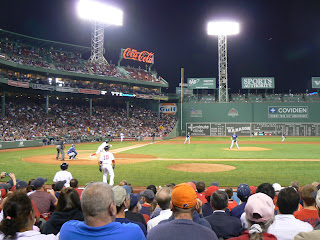 I like how you can see the ball flying through the air off the bat of Podsednik here. Looked like a dong, but it was caught. 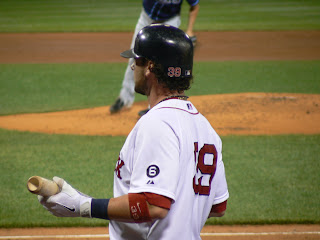 Jarrod Saltalamacchia, the man my mom named her dog after. 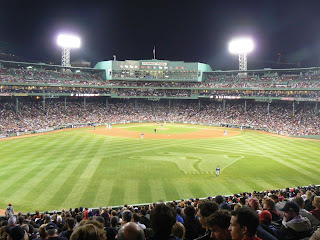 Finally we went out to section 36, row 27. A look at the socks on the outfield--you have to be high up to see them. A little chilly out there, but, again, for late September, totally fine. Barely needed a light jacket. 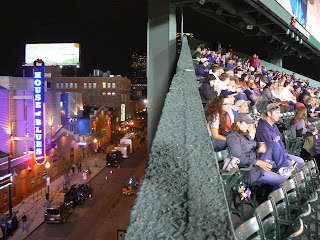 I usually take shots from this spot facing the Green Monster. (Example here.) I finally thought to take one looking UP the back wall toward the HOB and the Pru. I posted this pic on reddit and it shot to #1 on r/baseball and is still getting votes as I type. Anyway, Lester had a no-hitter in the 5th (I didn't make the Hansack connection till just now!), and in the 7th, we headed back toward the first base side to see if the buses were there, meaning the team would be headed out that night, and hopefully the rookies would be in weird costumes, as they were in 2009. 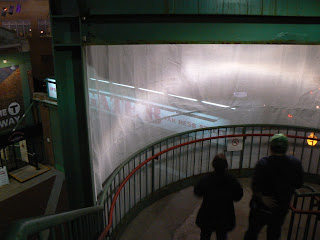 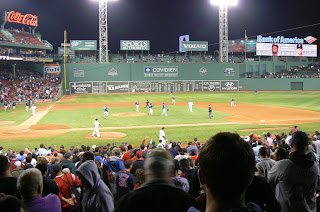 The Rays won, despite the remaining fans all standing and cheering for a rally through the last few outs. You can see Rodney and Pena looking up at the fake arrow. 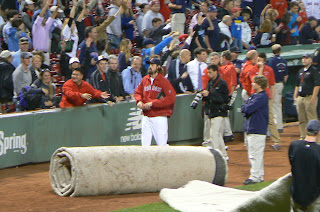 Then the players started throwing stuff to the crowd, mainly rolled up T-shirts. I almost got one from really far away, but the guy overshot me. Here's Miller way on the other side of the field giving stuff out. 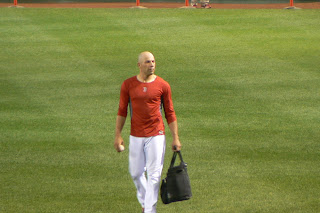 Aceves had a whole bag of stuff to toss. 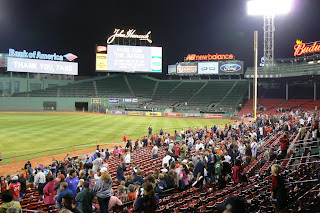 At this point we had to make a call. On our way out of the bleachers we saw they were obviously setting up for a long line of fans but we didn't know why--next thing we knew they were saying fans were welcome to not only go on the warning track but RUN THE BASES after the game. So it was that or watch the players come out to the buses. Between the fact that my mom and I had already been on the field this year at least once each, and her having a huge bag to carry, and the fact that it would surely be a mob scene, we opted not to to the base "running." 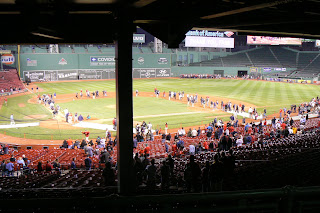 But I did get this picture of it all going down. At this point we left Fenway Park for the final time in the 2012 season. 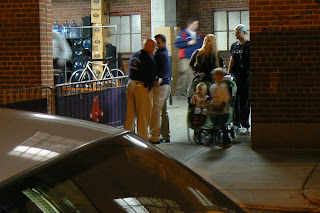 As for the hazing, it didn't happen. Maybe they did it for an earlier road trip. Maybe they decided this wouldn't be the best year to be goofing around like that, even though it wouldn't make a difference at this point. But we still ended up having a great experience of basically saying goodbye for 2012 to each Red Socker, one by one. Above, Cody Ross and family. 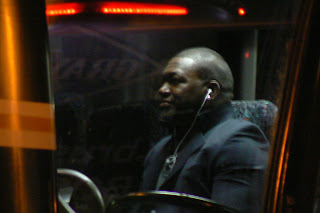 Then I started shooting video. I got a lot of guys as they came out. That will be a later post, along with more vids from the pre-game ceremony. Both my batteries were done, and I had about 6 pictures left out of the hundreds of pics and vids I took. But I got this shot of Papi in the front seat of the bus. 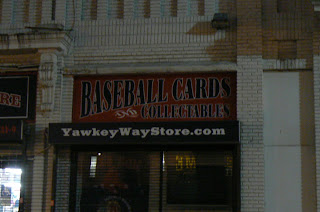 And then one more on Yawkey Way. Gee, what a surprise, the Souvenir Store, who used to have the WRONG championship years on the front page of their web site until I pointed it out to them, made a spelling error on one of their signs! CollectAbles? Come on. I guess it's an accepted form, but I'm pretty sure we as a society have decided on "collectibles."

Got back to Providence at 1:30 a.m. A fun night despite all the BS of this season. I guess next time I'll be at Fenway will be for the Yard Sale. I can't wait.