Okay, the pics were just too dark but I shot some video:
It's funny, while we all waited for the players to come out, some people went by mocking us, thinking we were either the classic sweatpants autograph-hawkers or Ellsbury tweens. They didn't realize we were a different kind of crazy, the kind waiting to see the Red Sox rookies in drag. Above is Kottaras on the bus, dressed as a sailor. I guess it was a Wizard of Oz theme, since there was a Dorothy, a Tin Man, and Daniel Bard as the Lion--he appears below.

That's Beckett alternating between a cup of something and a bottle of beer and talking to Youk, along with the "Lion" (Bard) and the "Tin Man" (Bowden). This was the first year I ever thought about this ahead of time (they always do it on the way out to the final road trip), and I happened to have a ticket, so I fully planned on sticking around. I saw Kelly aka Sitting Still shooting--I guarantee she got much better shots than I did. And the news probably got better video--the players were only visible briefly across the street before boarding the bus. It's better when A. it's daytime and B. they come over and sign autographs in drag.

One pic from earlier--while walking from 1st to 3rd base pavilion, I passed that media lounge, and look who was in there: 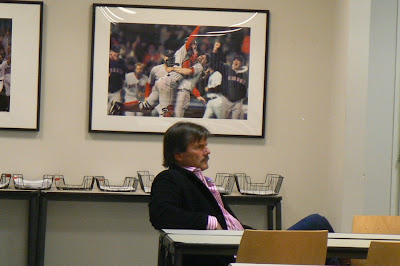 ***************
I go to one game on the homestand and it's the only loss! Two nights in a row the "strikeout with ball getting away" costs us. At least Beckett was Beckettier tonight.

But I knew going in I'd have the "win" of seeing grown men dressed like women. It was the annual rookie hazing day, and I hung around after the game to get some pics. I will post some in a few minutes and the rest tomorrow night. Warning: pics may not be very awesome, as it was night, and the players didn't come near the waiting fans.

Comments:
I've gotten 15 views on one of those vids in about 10 minutes. This one's gonna be popular as everyone is searching for it. And what are they getting? My crappy dark videos! I gave Kelly a plug on the YouTube page so at least maybe the masses will head over there.

Between the 'Wizard of Oz' theme last night, and the walk-off cream pie the night before, we're starting to copy the Yanks a little too much. Of course, they copy us even worse all the time.

I hope if nothing else, last night finally convinced Tito that VMart should be starting exclusively behind the plate in the playoffs. And I hope Tek accepts his new role as Bench Coach next season.