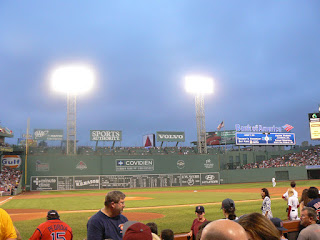 This was the Sunday night game from August 7th. The one I'd gotten tickets to for me and my Yankee-fan friend Mike before the season. Funny how going in, our teams were tied for first, and each had taken a game so far in this three-game series. He was late getting in, so I got to do one of my lifelong dreams, standing on Lansdowne and trying to get balls hit over the Monster during BP. The guy from that parking garage was holding a ball and told me he got three, and has roughly a hundred this season. No balls came over the whole time I was out there. Mike arrived, and we went to our seats one row in front of the Dunkin' Dugout, which is the last row of the bleachers in right field. 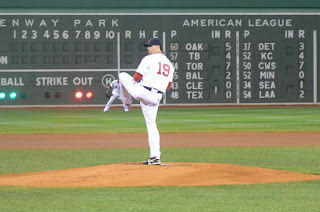 But as you can see, we moved. I suggested we check to see what great seats were available, then sit in them as long as we could. For a Sunday night summer Sox-Yanks game, we knew there wasn't much hope, but hey, $400 seats still cost $400, and if nobody buys them in that last hour before the game...they're ours. 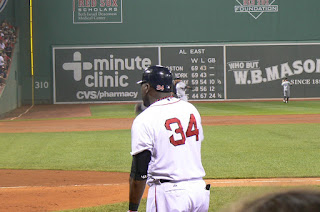 His phone is weird--it only brought up one pair of seats. So we had to go with those. But they were great, as you can see. The four seats in front of use also were empty, so when the real ticketholders showed up, around the second inning, we moved up one row (this is about 8 rows from the on-deck circle), and were able to stay there the WHOLE GAME. So for our $12 each, we parked free at meters steps from the ballpark, and sat in $135 seats that were scalping for $400. 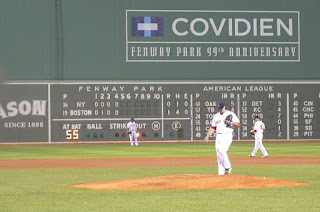 And here's the proof we were still there. Mid-game action. This is around the point we exhaled. As for the game, it was a 1-1 affair for a long time. And me and Mike talked about our beloved mundane baseball memories and numbers from years past, and talked about the "old days," which included when his dad used to get us Fenway seats in this same section, only they were front row, right next to Libby Dooley. This was in the late 80s. 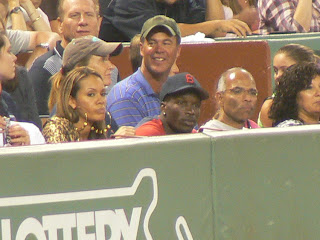 They put Ocho Cinco up on the board, and people cheered. After thinking it was either Jamie Foxx or Michael Jordan, Mike finally realized it was Ocho. I wouldn't have recognized the guy out of uniform, and, honestly, I knew the Pats had gotten a guy everybody was worried about, Haynesworth or whatever, but I didn't even know they'd gotten Ocho Cinco. Maybe I heard people saying they got "Chad Johnson" and I just didn't make the connection, I don't know. I clearly don't pay attention to the NFL. Anyway, we figured out where he was sitting and I got this pic. Too bad we didn't see Larry David, who had been there on Friday night. 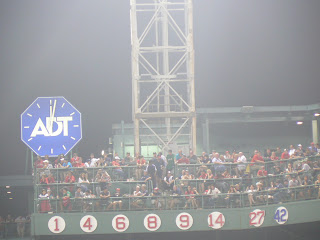 It was a long night. A weird day, too, where it was raining all along the coast all day leading up to the game, but everyone west was getting a sunny day. The rain stopped in Boston just in time for the game, but around 11 it got foggy again. The whole time, though, it was hot and sticky. Here, the clock shows a post-midnight time. 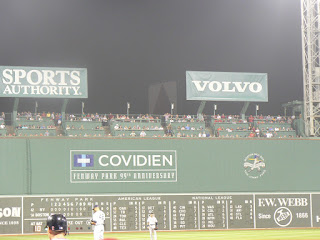 Even the Citgo sign had gone to sleep. (Yes, they do shut it off at midnight.) Also, Mo is in, about to blow the save, after the Yanks had taken a 2-1 lead. 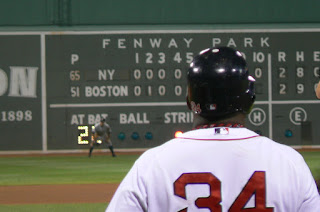 Papi waiting to hit in the tenth. His double started the game-winning rally. 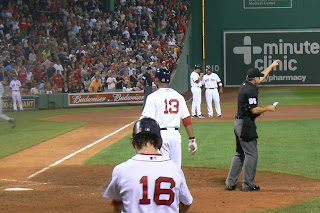 Reddick, the eventual hero, on deck, with Crawford up, and Bogar talking to pinch-runner Darnell McDonald, who was on second for Papi, as the eventual winning run. 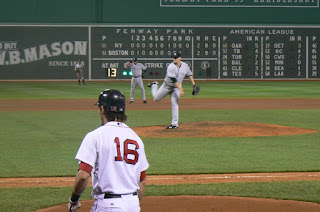 I love this shot, because it shows Reddick waiting to hit against new pitcher Phil Hughes, who he would get the winning hit off of. I already posted my video of it here. 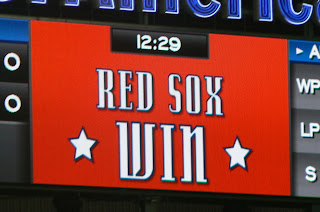 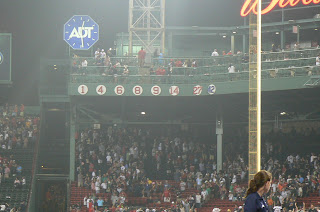 And the analog version. 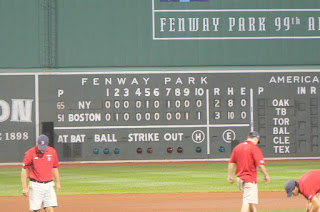 Your final, 3-2. Mike, fortunately for him, had to leave before the end, with a long trip back to Fairfield County, CT, and work the next morning. 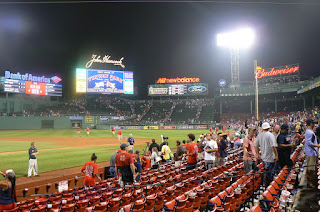 I had to stay for the celebration of course, so I didn't mind being trapped for a while. After Dirty Water, Tessie, and Joy to the World, they played (on keyboard) On the Road Again since it was the last game of the homestand. I need to stick around more often to make an exhaustive list of what's played after the three staples. Sometimes it's that Build Me Up Buttercup song, which kinda makes no sense after a win. And after a loss of course you don't hear the winning three tunes. I know I've heard Will You Still Love Me Tomorrow after a loss, but again, I need to do more research--feel free to add your own.

Comments:
Hey Jere, my son and I have $12 tickets for the Yankees game on the 31st and I'd like to check out your "move up" to great seats method. What website do you check for seat availability?

Shoot me an e-mail, I'll give ya some tips later tonight.

I hate that in Ft. Myers, even after a win, they only play one verse of "Dirty Water" and then play all of "Happy Trails".

Did you notice that they fixed the 1976-2008 logo in the "logos through the years" display to finally get the colors right? I walk past that all the time, but just noticed it yesterday. I wonder how long ago they fixed it. (Funny thing is I was taking some Fenway first-timers over to ask "Can you spot what's wrong with this logo?" and then it was fine!) They also added a list explaining what all the memorabilia in the "Fenway Archives" display is, which wasn't there before.

That's cool they fixed it. It's funny, I hardly ever walk in that stretch. Even yesterday at Futures, I took my friend who hadn't been there since 2000 all around the whole park, and that was the one part we missed.