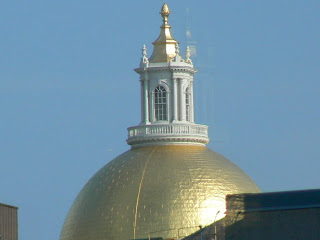 Interesting weekend, last. Kim was selling her soaps at ArtBeat in Somerville on Saturday. Then I had the game Sunday while she had more soap-selling. But my mom and my sister and her four kids were doing a whale watch in Boston on Sunday, so they got two hotel rooms in Boston Saturday night. So Kim and I got to stay there, and since Kim had such a successful ArtBeat, she blew off her Sunday show and went to me with Fenway on Sunday. Above, view of the (what, capital? State....house maybe? I don't know Boston, only the area around Fenway). 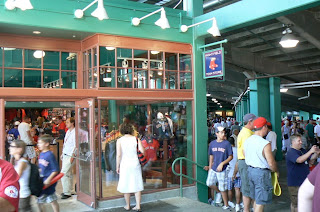 The construction out by Gate B is done! Shoulda known it would be a store. I like the way it fits in with the park and is glass, though. The above shot is coming through Gate B and looking left. 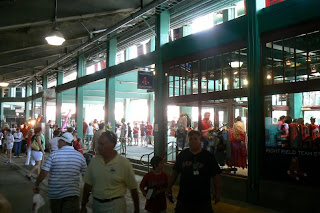 Here it is looking back toward Gate B. 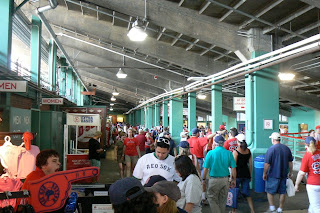 And now standing next to the new store, looking down the right field line toward home plate underneath the stands. If you went to the right and into the stands, you'd be right near the Pesky Pole. 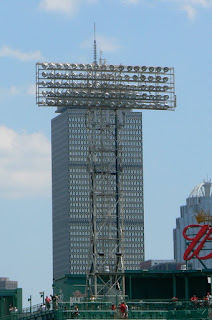 I don't think I've ever gotten this shot before, where it looks like the light tower and the Pru seem to be one/the same. 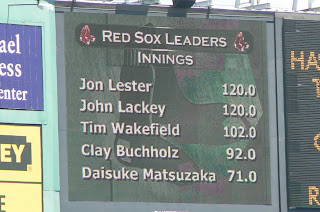 I thought this was odd, each of our top five in innings having no thirds, all ".0". 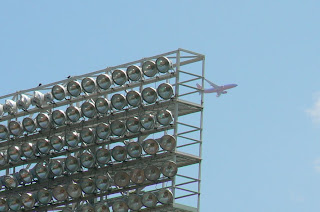 Three birds and some lights. 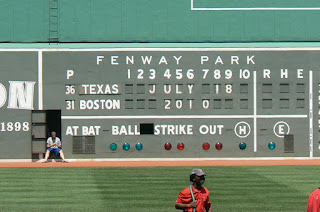 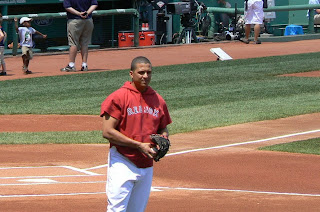 Good to see Victor Martinez on the field. 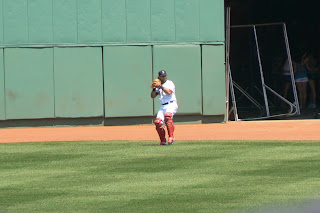 Dusty Brown with the bog club. 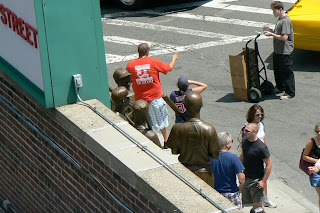 The new "Teammates" statue from up inside the park. 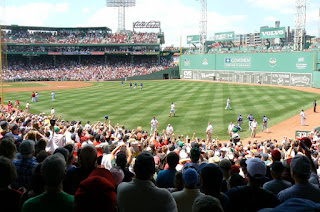 They had Sox players tossing out balls because it was the 600th consecutive sellout. At this point we decided to go up to the SRO to be in shade for the game. Bleachers would have been way too hot. 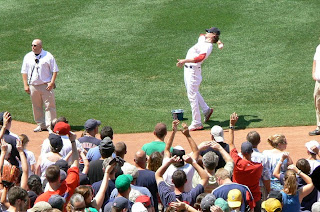 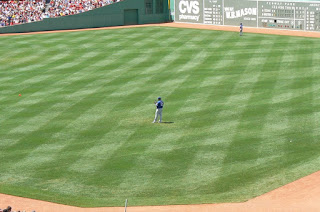 There was a red heart balloon on the field for a little while, but no one cared. 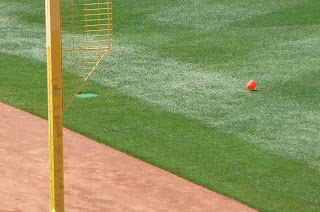 Here it is by the Pole. It was an interesting study in wind currents--that balloon blew way out almost to center field, then came right back to the foul line. 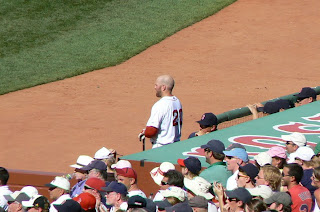 Late in the game we sat behind the plate. Here's Youk. We lost. I'll have some vids for you later about something weird from this game.

And from two days earlier, my cousin Amy took some shots for me: 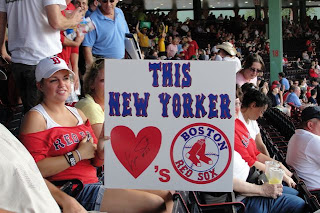 Always good to see NY Sox fans! (Even if they're still using the old logo. 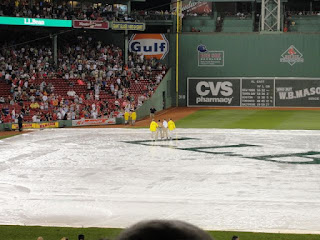 And did you know people ran on the field during that night's rain delay? I gather they got them faster than the Camden Yards crew. (Note: I have linked you to the vid in an article where the writer thinks running on to a baseball field with your clothes ON is called "streaking." I swear sometimes I can hear this country getting stupider.)

Re the new store: To my mind, everything they do to milk more money out of Fenway is one less reason for some idiot to propose a new park so they can make more. Also might make a handy spot to step into quickly to cool down on a beastly hot day.

yeah i mean it's not too offensive, whatever--they do have the giant water-fan thing actually right outside the door of the place, but hey maybe they'll realize if they take it away, people would be more likely to go in the store.

There have always been little souvenir stands near that spot, but I think this has more of that fancier "Banner '47" stuff, like in that fine oak room that's now in the back of The Souvenir Store.

isn't that the same logo that's used on redsox.com?

The logo was changed before the 2009 season.

You need to read this post, sir. (And many others I've written on the topic. This is one of my current pet peeves.)

And to answer your question, any logo they're using on the official team site SHOULD be the new one, but as we've seen, even the team themselves have brought out the old one by mistake on occasion.

Ha -- while you were at this game, I was sitting at a restaurant near the Bunker Hill Monument, watching it on TV.

Nice. The day before when leaving ArtBeat Somerville, I drove right toward that monument through Winter Hill, where I lived from '07-'08, and specifically, like, stared at/thought about it.

We walked the entire Freedom Trail on that miserable, hot humid day. What a bunch of suck.