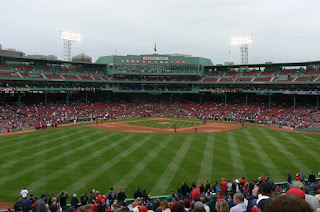 After my two-ball day the day before, and considering the rainy weather, I decided to get to Fenway around 6:15, met up with my friends (and Kim, who was already in Boston), and went right to the seats in the center field bleachers. Above, the view. Click each to enlarge as always. 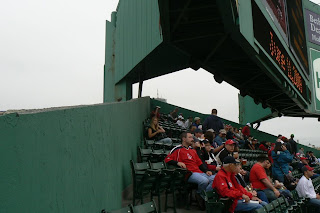 Tip of Pru barely visible to our left. Seats visible at bottom left are those two my mom and I sat in for that incredible win over the Yanks earlier in the season. I was two rows in front of those, in an 8-seat row, against the back wall. 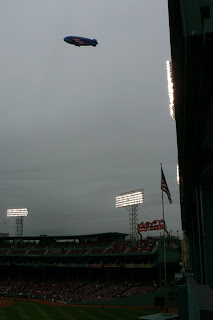 Blimp over Fenway for second night in a row. 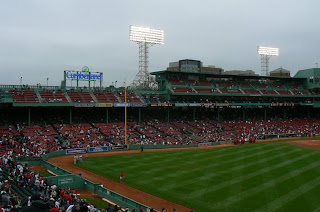 The view of right field. Again it was almost cold but not quite. Way too cold for June, though. The rain would come later. 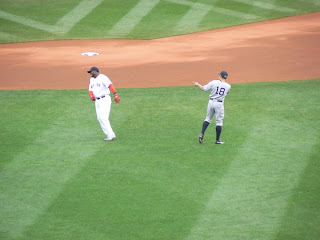 Papi greets the traitor in pre-game. 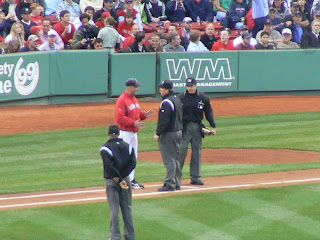 After Penny hit A-Rod, the umps gathered, and must have warned both teams. And Tito was pissed. 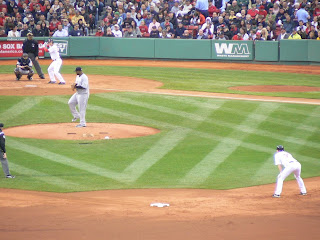 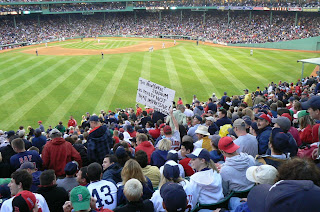 The I Like Bsaeball guy (who I've nicknamed ILB-ert) was only a few rows in front of us! We got to see the whole catalog, including this new *awesome* sign! 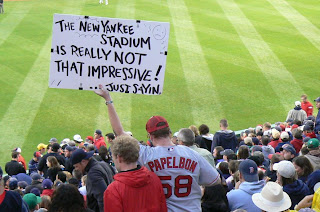 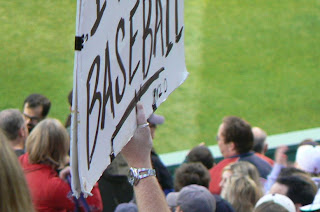 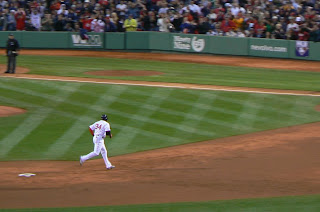 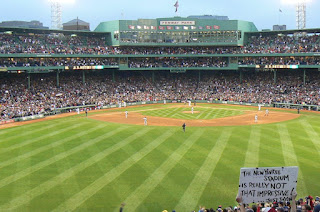 And Papi scores on his dong, as ILBert looks on. 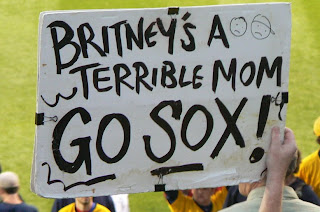 Back to the standards now, ILBert shows us the Britney sign.... 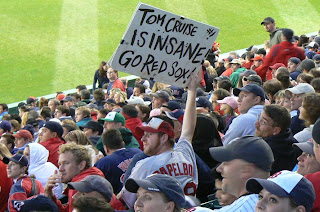 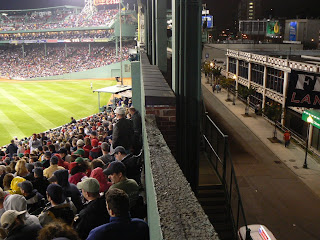 Shot of field on left and Lansdowne on right. Before the rain... 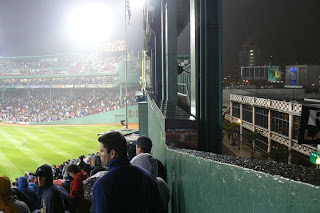 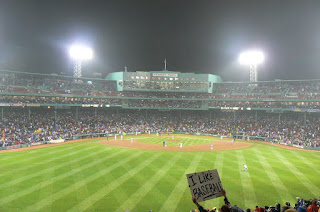 At this point I was just trying to get a good rain shot, but as a bonus, ILBert snuck in the ol' ILB, adding to the photo. Also at this point, the Yanks were going up 3-1 in the eighth, and I started feeling guilty that I'd gotten four amazing Yanks games in a row, and my friends, who I invited to this one, were getting soaked, and the Sox were close to losing. Of course, I knew we'd turn it around though, these are the Yankees, remember. Ha! 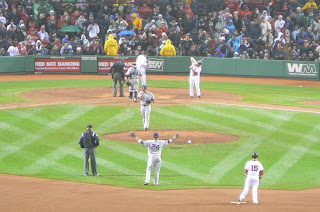 Youk up in the rain. His hit would load the bases, helping our key rally along. I'd like to say we all got to rip on Yankee fans, but they ALL LEFT when the rain, and their lead, came. This one Yankee guy (who inexplicably booed when his team was first announced--another Yankee fan clapped loudly for Ortiz--what is wrong with these people??) had been doing that thing where as soon as a ball is hit in the air and a Yankee fielder camps under it, he cheers wildly, assuming the ball will be caught. When Damon dropped an easy fly, the guy was off getting food. It would've been so incredibly sweet had been there and cheered, only to have Demon drop it. (Sure enough, him and another nearby Choker fan did the premature cheer again later--this time I yelled a warning: "might not wanna cheer till the play is made...") 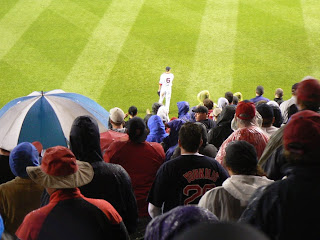 Rocco down in center field. So, for the people who did stay, it became that kind of party atmosphere you can only get when everyone's basically conceded the fact that they're not gonna get un-wet. The fact that we had another amazing comeback was part bonus and part vindication for having stuck out the weather.

My videos of the tying and go-ahead runs are here. We headed to the ninth, throats hoarse, and Pap nailed it down. 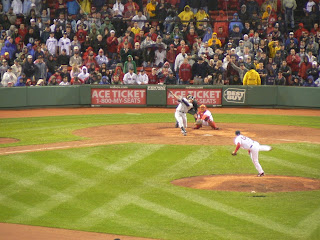 Here, Teixeira lines to first to end it. 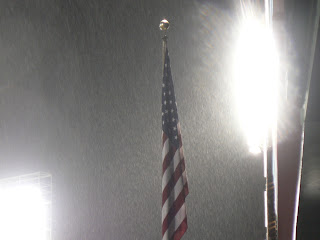 The flag in the rain after the win. I noticed after Dirty Water and Tessie, Joy to the World was not played. That's new for this season. I also noticed that that "gimme a beat, gimme a bass line" is played every game. It was after the 7th. Does anyone know if that's the official post-7th inning song? Or is that someone's entrance music? 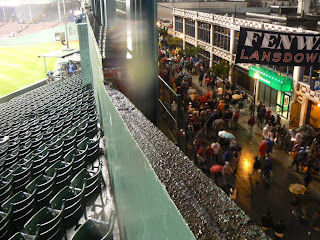 That same shot of Lansdowne, as fans file out. 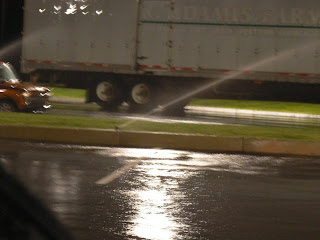 Later, at a rest stop, it's still raining, but the sprinklers are on anyway! Side note: the car in this shot was British--steering wheel on the right.

Comments:
I think the 'gimme a beat, gimme a bass line' song is part of the Boston Globe ad they play on the screen.

Ah, thanks. I can rarely see the board, as I'm often in the bleachers facing away from it, or in SRO with the overhang blocking it.