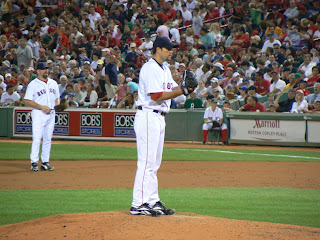 Kason Gabbard pitched a complete game shutout tonight. (Got to see three outs of it from this perspective!) Click pics to enlarge. 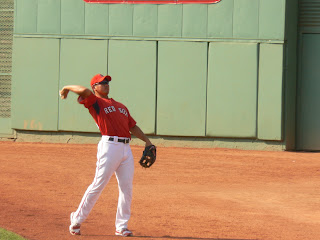 Dice throws a ball to a fan. 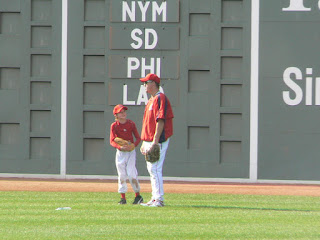 Timlin and his kid. More on players' kids on the field later. 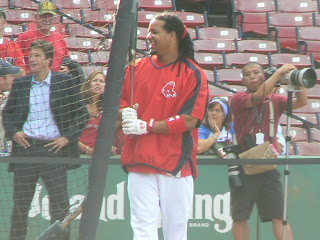 Manny, about to take some swings. 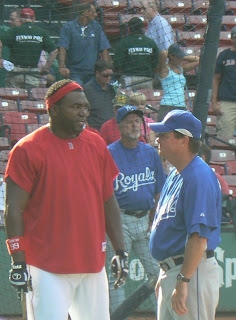 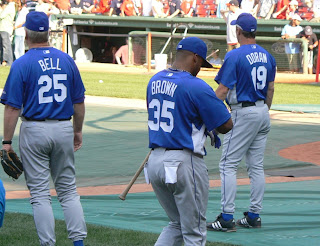 Emil Brown with no money, and surrounded by dudes from my day, Buddy Bell and Bill Doran. 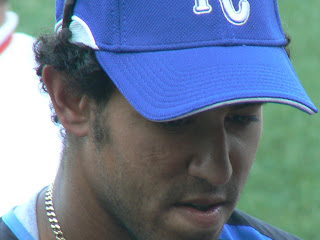 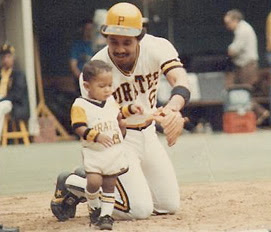 ...and as a kid, on the field with his dad. Photo courtesy of Pena via mlb.com. 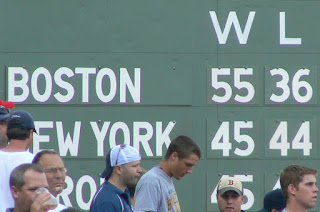 I thought it would be a cool shot, the standings with people half-covering them, giving them a living, breathing feel. Maybe not. Anyway, the guys mentioned in my last post are (unintentionally) in this shot, too. 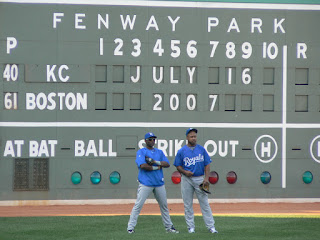 German and Brown, I think. 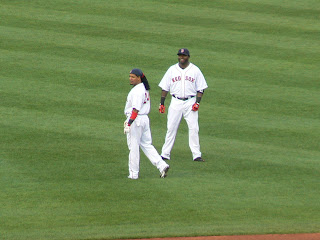 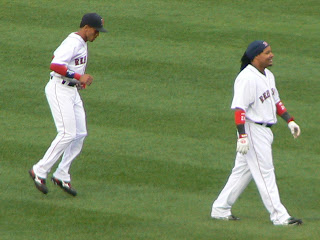 When looking at this pic, I got a serious, full six-second deja vu. Probably because I've taken the same pic before. 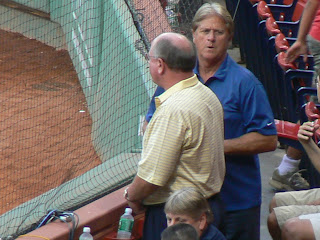 Drinkwater lookin' like a tough guy. I saw him stick his cell phone under those wires. That's the DW cell-holdin' spot. 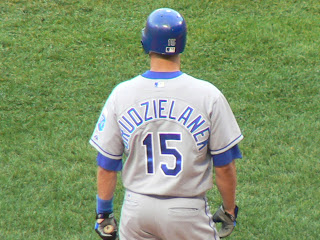 Long names on uniforms are fun. 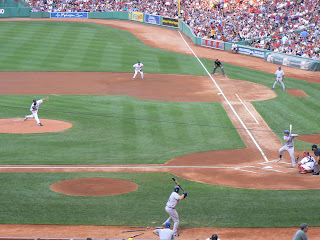 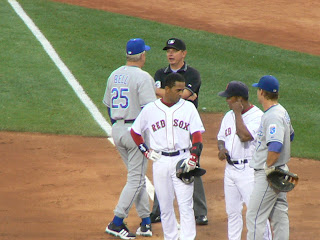 Buddy Bell argues a call. (What's up with his feet?) I'm watching the replay of the game now, and Lugo was indeed out. When the play happened, I immediately thought, "He'll get picked off anyway." Didn't you? He did indeed get picked off. 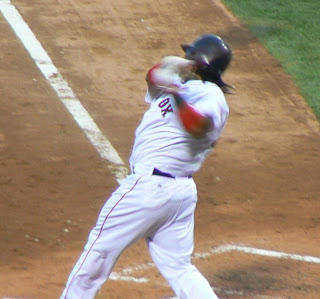 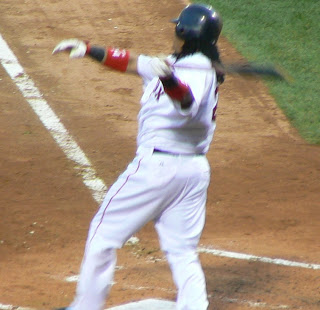 The two shots above are Manny hitting his mega-blast HR. I know I always say that pictures of guys swinging are mammoth homers as far as you know, but this really was his HR swing. I swear. 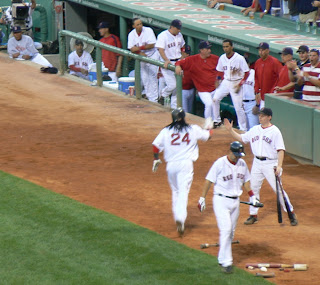 And here he heads back to the dugout. 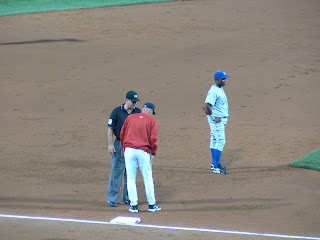 Tito argues a call, too. It also looked wrong on the TV replay I just saw. 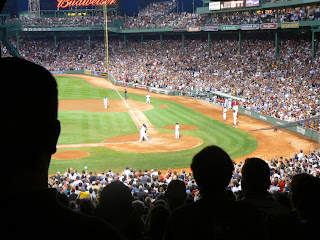 Papi touches the plate on his line shot homer. They keep saying he wrapped it around the pole. Hazel and Don said it. Inaccurate. I was looking right down the line, and that ball landed well to the left of the pole. Saying it was a "wraparound" cheapens what was a laser beam that would've been out of many parks. 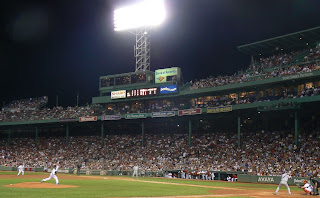 With a 4-0 lead, enough people left after eight so that I could go down close. Here, Gabbo closes in on the shutout. 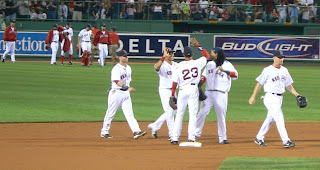 Sox win. I saw seven hits and a win today, eleven hits and a loss yesterday. Add another Papi and Manny HR to my list. I always seem to see those guys homer. Pedroia homered, too, and played good D. And Gabbo was a little tentative on his teo throws to second, but they were good enough to get two DPs. That dude was on tonight, changin' speeds, foolin' the Royales without Cheese.

Pretty perfect night overall. I was in and out of Fenway, nailed the metered parking, got a shutout win, was actually hot out the whole game--no light jacket needed, a Papi and a Manny HR, no red lights and no traffic on the way home, which I arrived at by 10 PM. (I do like long, drawn-out, AL-style games, but I won't complain about this one....)

Comments:
Gabs is a KEEPER!!!

Hey Jere- just started reading your blog a week or so ago, really great stuff. I was at the game and sitting a couple dozen rows back from where papi's homer landed- there was NO wrappage.

It was a perfect night indeed.

Jere, are you trying to give people the impression that you're in your fifties?

Chris--Glad you like it! Thanks. And thanks for confirmation. Definitely N.W.

Reb: That is interesting, I guess. Because people from my day would mean they are approximately 20-30 years older than me, because I was following baseball by age 5, and so the players then would've been 25-35ish. So, yeah, to clarify, Buddy Bell was playig major league baseball when I was a kid, seeing his baseball card/sticker, watching him on Game of the Week in the 80s, etc. I am NOT Buddy Bell's age. More like his son David Bell. In fact, not even that old. Closer to brother Mike Bell. Definitely not grandpa Gus Bell's age.

"German and Brown, I think."

This was Reggie Sanders and Emil Brown. Cool pix, man.

Thanks. And thanks for the correction. I can't believe Reggie Sanders is still playing....

And all this time, I thought "Jere" was an alias for Cool Papa Bell...