Last month on UniWatch, it was pointed out that the Cincinnati Reds once had two players wearing two different styles of uniforms on the field at the same time. Many Red Sox fans know that this was commonplace for our team in the eighties, when some players wore the BO||STON road jerseys, while others sported the BOS||TON style at the same time. I've written about this before, but now I've come up with a (mostly) definitive history of the Red Sox road uniform, from 1983-1989. 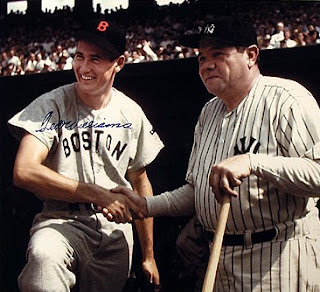 In other words, the "T" was on the same middle plain as the buttons. This means the word wasn't quite centered. A six-letter word with the fourth letter centered makes the word front- or left-heavy. Three letters to the left, one in the middle, and two to the right. In 1979, after having experienced a perfectly centered existence for the past seven years, thanks to a button-free uniform, the Red Sox brought back buttons, while trying to hold on to a centered city name. There are two ways this can be accomplished, so they had a choice: 1. Center the word perfectly, with equal spacing. Sounds easy, but with a button-down shirt, this would cause the third letter of a six-letter word to be sliced in two. (Probably why they never tried it from '38-'71.) 2. Put a huge space between the first and last three letters of the word, to allow for the "button zone." The team chose option two. This would be the Red Sox road jersey from 1979 to 1983. Here we see six Sox players from the '83 season, with the "BOS-[space]-TON" style (these are the uniforms used this past Friday night in San Diego, on the Padres' "80s Retro Night"): 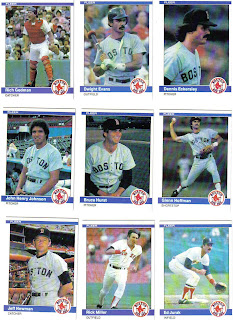 1984: After 5-years of a new, centered, yet middle-gapped, existence, someone made the call that the space had to go. The "BOS" and the "TON" were to be reunited. After all, a city divided cannot stand. This time, instead of centering the fourth letter, they opted to center the third letter--the "S." This put "BO" to the left side of the uniform, and "STON" to the right. Though aesthetically less pleasing than the "BOS||TON" method, it wasn't any less centered. Either way, you've got one letter dead center on the button zone, with two on one side and the other three on the other side. Here's the new-for-'84 style: 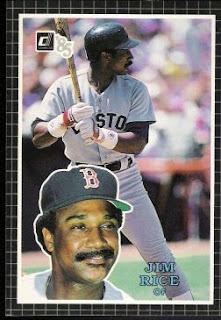 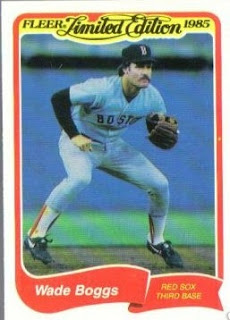 Some players, at least in spring training, kept using the "BOS||TON", as shown here: 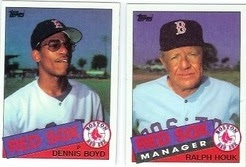 Note: Baseball cards are referred to by year of issue, but include photos from the previous season. For example, the above cards, which show 1984 pictures, are from the "1985" set. For this piece, I'll refer to the actual year the photo was taken in, not the year the card was issued. Moving on...

1985: I had thought that the last of the "BOS||TON"s were discarded when the team left Winter Haven to start the '84 season. 1985 would see the Sox adorning the "BO||STON" style for the second time. However, I did find some cases of Red Sox players photographed, supposedly, in 1985, wearing the "BOS||TON"s (see Dwight Evans below, bottom row, middle): 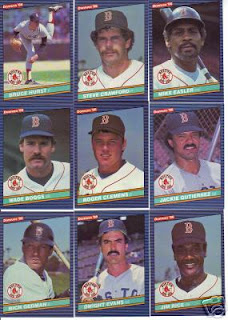 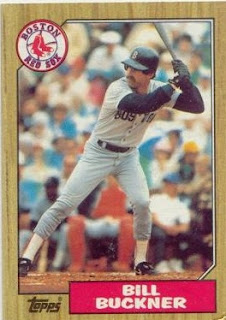 It could be another case of wearing an old uni for spring training. This looks like a Florida park, what with players sitting in the background, not even in a dugout, including a catcher in shin guards. And Buckner is seen elsewhere with the BO||STON, and the post-season shots of him and everyone else, as well as all regular season photos from that year, suggest BO- was mandatory in the 1986 regular- and post-season.

Here are Buckner and Rice in the 1986 World Series, with the BO||STON style: 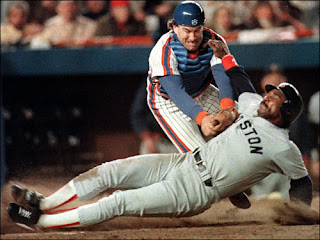 Up to this point, we had, at least in the regular season, for the most part, everyone wearing the same uniform at the same time....

1987: This is where everything goes haywire. According to this page, Rawlings took over making MLB uniforms. However, some Sox players preferred the fit of what had been Wilson unifroms. The problem was that Rawlings went back to the BOS||TON. Only now, like the uniforms of the 30s through the 70s, the "T" was back in the middle. Why Wilson couldn't just change their design to match the Rawlings, or vice versa, we may never know. What we do know is that Jim Rice had to have that BO||STON-style uniform. He wasn't alone. Many of the 1988 Topps Red Sox cards were shot in Comiskey Park (see the yellow bars dividing the green box seats in the crowd). You can see different players wearing the different style uniforms, definitely in regular season play. This means that in 1987 we had games where Spike Owen, Wade Boggs, and Roger Clemens were wearing the new style of uniform... 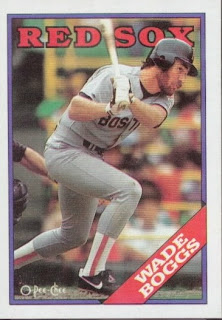 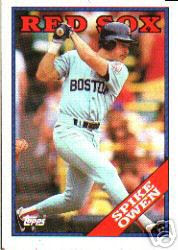 ...while the stubborn Jim Rice, Rich Gedman, and Marc Sullivan wore the old: 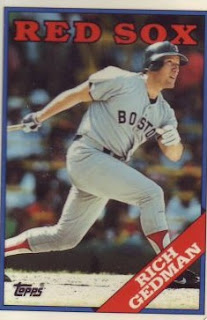 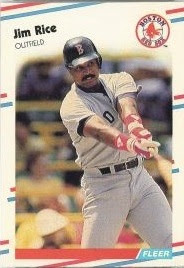 Here's a further example from '87. The next two pics are of Mike Greenwell and Dwight Evans. Each was taken at Comiskey on the same day. They're both wearing the Fenway 75th Anniversary patch on the left sleeve which was only worn in 1987. Both feature the same vendor guy in the crowd with the multi-colored cap. I even figured out the day of the game: 5/30/1987. (I've checked the weather from that day on almanac.com, I know what inning this is--top of the ninth--, etc. Trust me, it's the same day.) Yet Greenwell's got BOS||TON, and Evans, look closely, has BO||STON: 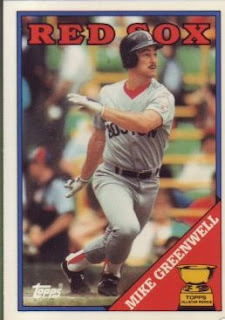 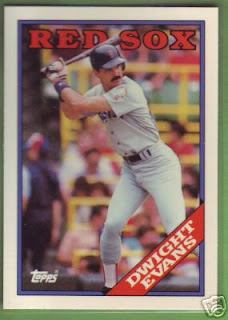 1988: At this point, it seems Jim Rice is the last holdout, still wearing BO-, while everyone else has given in to the BOS-:

I did notice something disturbing here--the Topps Bowman set of 1989 used pictures from the '87 season. On the '89 Bowmans of Burks and Rice (not pictured), you can see the patch worn in '87. In fact, the photos are from that same day at Comiskey. How did I not notice this at the time?

1989: I can't find any pics of Rice in a road uniform from '89, but one can assume he stuck with the BO- for his final year in baseball. I can also assume no one else wore anything but BOS-. The following season, the Red Sox would change the design of the road uniform, adding color and names to the back, and changing to the more Red Sox-y font. They still wear these today.

Here's what the Hall of Fame's Uniform Database shows for the years 1978-1990. Notice they incorrectly don't differentiate between the pre- and post-BO||STON eras of the eighties. Instead of a space before and no space after, they just have a slight space for all those years. They clearly don't care about spacing as much as I do.

After all my research, I was missing one thing. A picture of two Sox players wearing a different style of uniforms together on the field. My proof above is pretty rock-solid, but I kept searching--and I finally found one. (Granted, any video from 1987 would show this, but still....) Ladies and gentlemen, Rich Gedman and Mike Greenwell, teammates in two different uniforms:

Oh, and if you've recently bought this Cooperstown Collection 80s Red Sox road jersey, no, they never looked like that. At all. Ever.

Thanks to the all the eBay sellers I borrowed many of these pictures from....

Comments:
Without doubt, the bigger issue at play here, and one I'd sort of forgotten about, is how incredibly hideous the faux-wood borders on the '87 Topps were. Worst baseball card ever. What were they thinking?

I'll never forget opening the first pack that year and seeing the wood. Shocking. Especially considering '85 and '86 were pretty much the same, they really went off the board on that one..... At least it has its uniqueness....

The Dana-Farber Children's Cancer Fund Game(Jimmy Fund), the 1st One Ever held outside of Boston

jfMattySox: I'm pretty sure that the wood-paneling on the '87 Topps is actually a 'throwback' homage to the 1962 Topps set: http://www.1962topps.net/

jfJere: This is an outstanding post on a topic that I personally never get tired of. However, I do have to point out one thing: the block BOS TON lettering was in a very dark navy blue, not black. Yes, I know, it looks black in every picture or video that you see, but I had the opportunity to see those uniforms up close several times from '79-82 (remember, I used to go to a lot of Sox games at Yankee Stadium as a teenager, and used to hang over the third base railing and get Sox players' autographs), and I can verify that they were navy. It was much easier to tell during a sunny day game than at night.

jfAJM: That's a good call, thanks. That's one of those things where I hear it, and I think, Wow, I never even thought it could be anything but black. Yet it makes perfect sense them being, you know, the team colors...

jfAJM: Watch this space! In a few minutes, hopefully, I'll put up a link to the pictures of your choice of prizes....

jfAJM: Go to the quiz site, bottom of top entry to see the three cards, and let me know your choice.

Okay, I took a look at the cards, and I changed my mind...I'll go with the Hurst card; it's a nicer pic and layout than the Stapleton.

I'll e-mail you with my mailing address. Thanks again!

Hurst it is, champ. Congrats on the victory.

Keep up the good writing.

Why thanks! Great job forgetting to provide a link on your stupid spam post! You stupid idiot! Instead all you did was give me a compliment and you'll get nothing in return. Dumbass.....