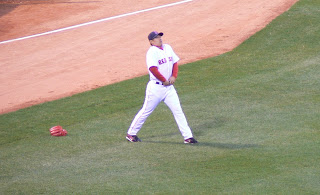 My girlfriend and I were psyched to be at Dice-K's first Yankee game on Sunday night. The amount of flashbulbs that went off during his warm-up pitches alone was incredible.

You can see how many people were crowded around during his pre-game bullpen session. All along the high center field fence, too. 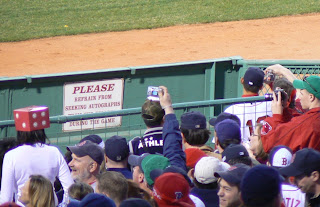 A close-up of Dice in the pen. 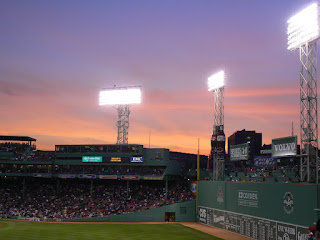 The day before, I ended with sunset shots. Sunday, the game started at the time Saturday's ended, so the sunset shots come at the beginning here. 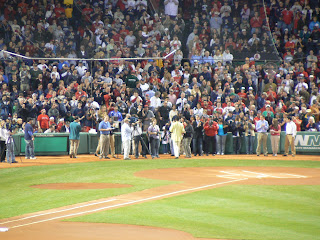 They did the Jackie Robinson tribute. That's Oil Can Boyd in the yellowish suit. They had a nice piece on the scoreboard about non-white Red Sox legends. You couldn't help but notice how short it was--even though it was all in slow motion. It still was nice to see those beloved players honored. 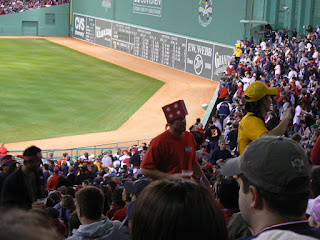 A dice-head. Hey, what's with people putting their shoes on their heads to try to start rallies? Some people were doing this in the bleachers the next night. 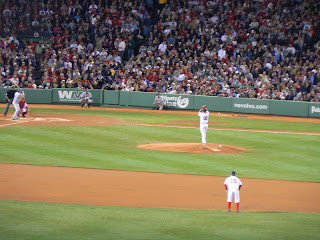 Dice in the wind-up. 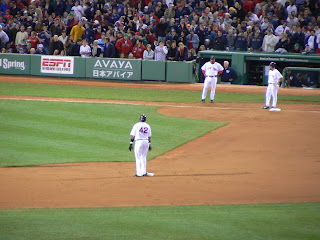 Papi wore number 42 to honor Jackie, as did Coco and DeMarlo Hale. 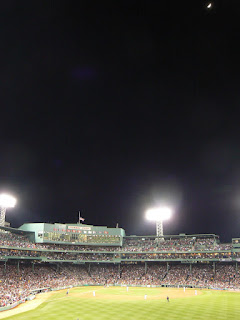 Moon over Fenway. By the way, my shots of the four consecutive homers are here. 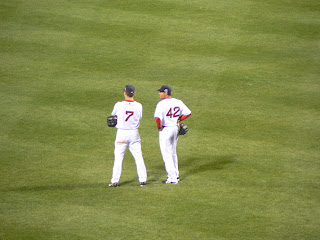 Trot Nixon and Mo Vaughn. I mean, Drew and Crisp. 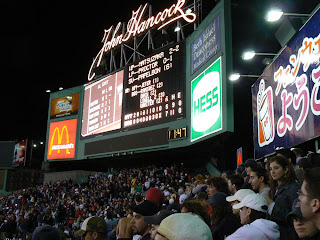 This was an awesome game, and a great way to finish out a sweep of the Yanks. Yankee fans, at least the ones who call sports radio stations, were completely arrogant going into this series. And most of the hosts seemed to agree that the Red Sox don't have a good line-up, and because of that, the Yanks would somehow go into Fenway and win the series, despite that their pitching was clearly in disarray. There's still talk of the Yanks getting their injured pitchers back, and just taking over the division. But our pitching is way better than theirs. Now, they've lost five in a row, three to us and two to the Devil Rays--their line-up isn't exactly overcoming their pitching woes. And that's what will happen with them. They might be able to get into the playoffs like this, but, again, they won't go far.

A few pics from Monday night vs. Toronto soon. Then, this blog will get more writey-writey for a while. I'll be going to a few games each month, but not like this crazy Fenway-centric April. Although, of course, I'll be posting road trip pics from my "correspondents" all season long. And scroll down if you missed the Saturday pics.

Comments:
10-4 on the Mighty Oak. I think that relief pitchers are more in need of nicknames than anyone else.

I heard someone call Timlin "The Iron Eagle" a few years ago (though I never saw it anywhere else) and now it is hard not to make a bird noise whenever he's brought into a game...