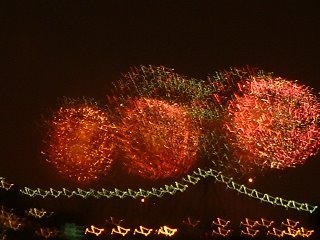 Insert joke about Indians bats and fireworks here. Shawn "Of the Dead" Chacon is my dad's "favorite" Yankee pitcher. And he's quickly becoming mine. Michael Kay pointed out his ERA over his previous four starts had been over ten. With today's 7 ER in 1.1 innings (incorrectly stated as 3.1 in an mlb.com article, don't believe the hype), make that about a 13 ERA over his last five. Almost 7.00 for the year, which is a number you don't want to see out of one your starters.

The sound of the Grinning Savages' bats today actually made you feel sorry for the ball. It was like batting practice off Yankee pitching. Six homers, none of them cheap. Just fun. Remember what happened the last time Cleveland embarrassed the Yanks? I do: the Red Sox went on to win the World Series.

And Torre says he's looking for outfield help. You mean Melky Cabrera and [can't even think of name] haven't worked out for ya? Haha! Good luck with that.

Unfortunately, Mike Timlin would've fit into the Yanks' staff perfectly today. We should win Wednesday, unless we want to lose three in a row to the Rays. And that can't possibly happen, correct? But Toronto won, so the Yanks are now tied for second. Go Jays. For now.

About these works de fuego: My mom always wanted to see the Macy's fireworks in New York. Every year she'd say it. And every year the rest of the family would show no to negative interest. Last year, realizing I lived in New York, I invited her down, to finally fulfill her LLD. So my parents and I watched the 'works over the East River, which is actually a... eh, forget it. We sat somewhere in the 40s, under the FDR drive, and felt like each 'work was exploding inside our bodies, as actual ash rained down on us. I'm telling you this now because it's a lot cooler than this year's story, which is that Chan & I weren't really psyched for the display, despite an earlier idea to watch them from the Brooklyn Bridge. At the last minute, we walked over to Carl Schurz Park, about 40 blocks north of the closest firework-shootin' barge, and caught the show by looking down the river. The above pic shows the "Feelin' Groovy" Bridge, with explosions behind it. 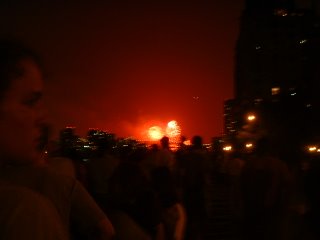 I liked when the sky turned red. Very apocalyptic. And a huge day for stuff being launched into the air. North Korea's missiles, the Space Shuttle, Indians' homers, fireworks... 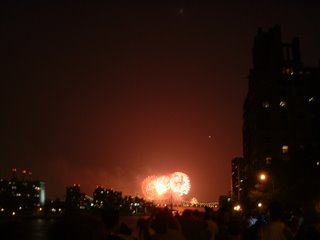 More redness. You'll notice these are all blurry. You got a problem with that? 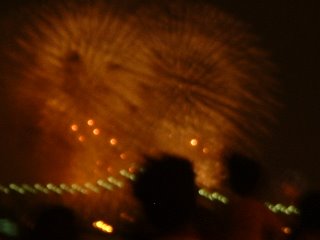 This one's cool in its blurriness. 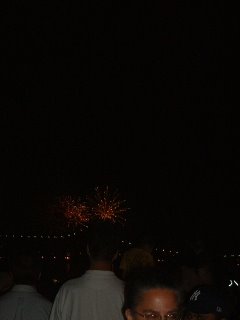 Just to the left of the man's head is a firework. Above his head is his brain spewing out upon his being shot. I kept telling Chan, "If you wanted to shoot someone and get away with it, what better time than at a fireworks display?" I'm surprised this doesn't happen more often. Actually, being that far from where they were being shot off, the sound was barely there, and we could talk to each other, which was cool. 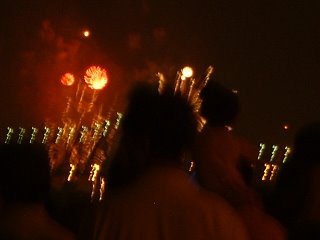 I kept trying for the "kid on shoulders with fireworks in background" shot, and this is the best I could do. Click these to make biggly-wiggly, by the way. 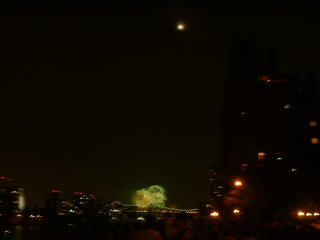 Comments:
Did you miss that the 4th of July is George Steinbrenner's birthday? (Nice, what with him being a felon and all.) Good birthday present, Native Americans.

That's a great call. Indians scalp Yanks on their birthday.

Fireworks photos are eeeevil without a tripod. I kept trying to shoot long exposures, which was either a terrible idea or a wonderful artistic experiment, depending on your view of the results.

I'm sure yours came out great, Shutterwolf. My camera, meaning the one I borrow, just makes everything blurry when it's dark out. ButI really do like the effect it ends up giving me. You just have to pretend the people aren't blurry when the lights are.

Great pics, with a backdrop of NYC. Can't beat it!