Let's review: MLB doesn't know that one of their own teams tweaked their logo in December 2008. (Old here.) (New here.) They're still using the old version on Gameday, as shown below:

However, the Marlins changed their logo this offseason, and before even playing one regular season game with it, MLB has made the switch on Gameday:

Now you might be saying that the Marlins made a huge change, and the Red Sox' tweak wasn't that big of a deal and nobody cares. Well check this out--the Blue Jays also have a new logo (old here, new here), which is a tweaked version of the one they used to use a few years ago. And MLB has that one up already!

When I type in "marlins logo" into Google Images, 8 of the first 10 results are the new logo, which didn't exist until a few months ago. When I type in "red sox logo," ONE of the first 10 results shows the new version of the Circle Sox logo. (I have noticed that the Boston Bruins have suffered a similar fate to ours--they tweaked their Circle-B logo for the '07-'08 season, and about half the image results come up with the old.)

After years of monitoring this, I guess my conclusion is that if you have a logo and you alter it slightly, people just aren't gonna notice, despite that you had a press conference announcing it. For people to notice, you have to come up with a completely different logo, OR tweak one you used to use but has been out of service for a while. (Also note that when the Sox changed, they also demoted the logo from primary to secondary, making the Hanging Sox the primary. Maybe that affected things too.)

But the thing is, "people" are gonna eff stuff up. They have diapers to change. What I still can't fathom is how the league or team itself could ever not know about an official change. Or anyone who's officially affiliated with the team. Yet the Red Sox, MLB, and NESN have all trotted out the old version of the logo at various times as if they either never got the memo or just had an intern grab a logo from Google (with not a single person in the entire organization noticing it was wrong).

As for un-affiliated companies, there are of course still plenty of those who are clueless. My local Providence news station will give Red Sox news with the big old logo smiling at me on the screen. But the best one to me is the Boston Herald. That new logo is entering its fourth season, and the Herald is still using the old version right in the banner of their Red Sox "Clubhouse Insider" section. But to be fair, they forgot to cover the press conference* anyway! 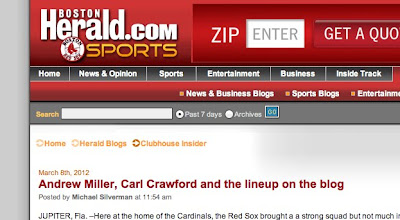 *The one where the team released the new logo and road uniforms--maybe somebody will finally care about this when the team accidentally takes the field one night with the 1990-2008 jerseys on!