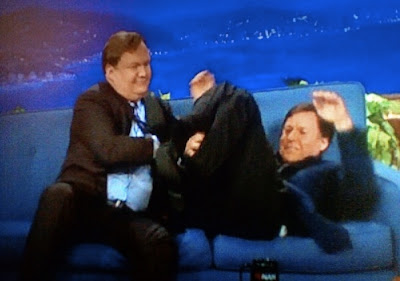 From the Conan show.

Moving on, Shoppach is back. Did I ever tell you about the time my mom took a picture of his first major league hit at Yankee Stadium?

We also resigned Albers. We non-tendered Rich Hill, who did a fine job before his big injury. But he could resign with us anyway. They say he won't be ready to pitch until late in the season. I hope we get him back. Him and Albers both seem like righteous gentlefolk.

Comments:
But Tek could be gone! I'm just not ready, Jere!

Yeah he could be. If so, I hope they just have him switch right over to some type of coach. That way he'd still be "handling the staff," but it would be up to somebody else to do the work. It could be a new coach: "staff handler."