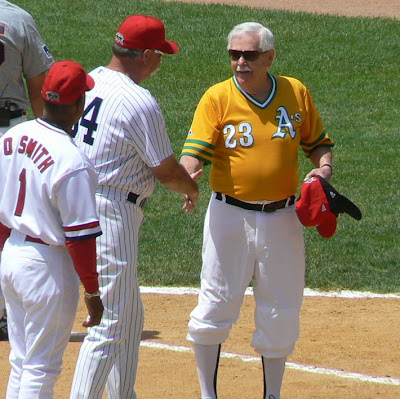 Last month I got to see Dick Williams manage (both teams!) at the Hall of Fame Legends Classic. The manager of the 1967 Impossible Dream Red Sox died yesterday at 82. His ashes will be scattered at Doubleday Field, where he is in my picture above.

I absolutely appreciate what the '67 team did for Boston baseball. But I don't know how much I buy this stuff about it being the "birth of Red Sox Nation." My family (the ones who are Sox fans, anyway--remember, I'm from the middle ground of Connecticut) has loved the Red Sox since long before 1967. And had the '67 team finished in last place, all of us would still be diehards today. If Red Sox fans wanted to just root for whichever team wins the pennant, we all would have become Yankee fans decades ago.

As you know I avoid much of the Boston media. Especially Pete Abraham. I can't even look at anything he writes because I know it will raise my blood pressure more than seeing a selfish waste of space texting behind the wheel does. But while looking at Dick Williams articles, I came across one from the Globe, and was glancing over it before even realizing I was reading Dishonest Pete Abe. Sure enough, I'm pissed again.

Peter starts his article by talking about Red Sox fans who started liking the team in 2004. Then he goes on to say that Sweet Caroline and NESN* exist because of the '67 team, talking about how the Red Sox weren't always good and the park wasn't always packed, stuff we've all heard before. Why can't this man tell the world about all the great Red Sox fans who lived and died with this team through decades of heartbreak? Why does he have to imply that we're all a bunch of front-runners who started liking the team in 2004? And on top of that, he goes and acts like a true Red Sox fan started liking the team during another pennant-winning season 37 years earlier. So we're all a bunch of assholes who only like teams that win. You're talking about Red Sox fans, Peter. There are legions of us, all of whom had this team passed down through the family for generations. You should know this as you claim to be a fan who grew up with the team yourself. But let's all remember that this man who mocks us all as being fake Red Sox fans is such a real fan himself that he....covered the New York Yankees.

I hate this man so much. Now he's starting to get serious NESN airtime, too. The guy's ego has got to be ready to burst. Thinks he knows it all. I will continue to try to avoid him, but, for now, there's my yearly rant about him. Sorry, Dick Williams, that this seeped into my post about you, but he started it.

*A cable network covering Red Sox games starting in the 80s exists because the Red Sox won the 1967 AL crown? It's funny how certain ideas just get into people's heads and suddenly everyone's saying it without stopping to think that it might be complete bullshit.

Comments:
The thing about the "Red Sox nation started in '67" thing, is that it really has to be true, just because of demographics. Many people start being diehards in high school, or college. If you were in college in 1967, you were born around 1947. That would make you 64 today. People under 64 make up a majority of any population, not just Red Sox Nation. So, saying Red Sox Nation started in 1967, is true. But saying "driving cars nation" started in 1967 would also be true since a majority of people driving cars today started driving after 1967.