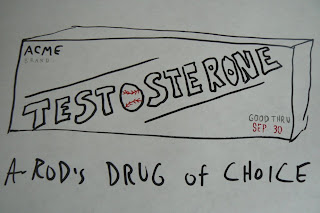 I've been looking into articles about A-Rod's injury in spring training 2003. They all say that he complained about shoulder pain for a few days, was found to have a herniated disc, and got an anti-inflammatory injection. Quickly, he was back in the lineup. Tuesday and Wednesday, March 11th and 12th, were the days he had the pain. Thursday the 13th, he left camp in Arizona, flying to Dallas for a CT scan. On Friday the 14th, he got the injection.

According to this article, he was supposed to be away from camp for one day, but then they changed their minds:

Rangers shortstop Alex Rodriguez will remain in Texas for several days after returning from spring training for tests on his stiff left shoulder. Rangers general manager John Hart and manager Buck Showalter didn't provide any results from tests done on Rodriguez, or say if any serious injury had been revealed. The five-time All-Star shortstop had expected to be gone only a day when he left camp Thursday. "We decided to have him stay back and rest, not push it," Showalter said Friday. "He'll be back Sunday. We felt if he comes back too early he would try to push the envelope. We just don't want to do that."


Why does this matter? Because that same Friday, while A-Rod was away, randomly selected Rangers were taking their urine tests for steroids! The article notes this was "the day" of the tests, implying it was the only day of spring training it happened. And I have read in other articles that an independent company went around to all 30 camps that March, again implying that each team had only one day of testing in March.

So what does this mean? Did they keep him away from that test on purpose? Regardless of that, these were the first tests of the year--so if the test he failed was in April or later, wouldn't that mean he didn't stop using at the time of the injury like he said? I mean, I guess the testers could've waited for him to get back to camp, or gone to Dallas to do the test, but it seems to me that A-Rod was NOT TESTED IN MARCH 2003. Therefore, his failed test had to have occurred later, meaning he had the stuff in his system during the 2003 regular season.


Interestingly, A-Rod was asked about the surge of power in the majors in a baseball preview article which brought up steroids. Here were his comments, which appeared in the NYT on 3/30/2003:

Alex Rodriguez sat in the Texas Rangers' clubhouse in the new spring training complex in Surprise, Ariz., and talked about conditioning and weight work.

Bigger salaries have eliminated the need for off-season jobs and have provided inducement to work out during the winter as well.

Rodriguez, who has hit 109 home runs the past two seasons, is a prime example of the change in size of today's players.

''There was only one Cal Ripken and Ernie Banks,'' he said, referring to the size of those shortstops. ''Now you're seeing Jeter, Rodriguez, Garciaparra. These are big people playing shortstop. That's not normal. Is there going to be a 6-8 shortstop in the year 2030? I hope not. But at the pace we're going, that's where it's going.''

Comments:
More questions that could've been asked by waste-of-space-used-to-be-a-credible-journalist-before-he-decided-to-become-guitar-playing-baseball-demi-god Peter Gammons...what a fucking waste of an interview...just embarassing. No follow up questions on anything. Just fucking pathetic. Awful. A disgrace. I am disgusted.

I know, when someone says stuff like "roughly," you ask them to specify.

This article from March 2003 gives more info about the testing. It said players didn't know when the test would come, only that it would happen some time in March. In the regular season, they'd test 240 players.

It says, at least for the Mets, 26 players were tested on the first day the testers were there, and the other 14 would be tested before the end of March. So I guess if A-Rod missed that one day, he could've just been put into a later group. (And it says the original group was re-tested 7 days after their first test.)

Still, if he really quit the stuff as that injury happened, any test done after that should've shown him clean--unless he stupidly kept doing it in the regular season and was among the 240 who were tested again.

AROID'S comments back then made as much sense as a piece of already chewed gum on the sole of my shoe...