Nice job by Boo-urns tonight with Inning 7. This is the one where the Dodgers finally beat the Yanks, and then they and the Giants leave New York. It ends with Teddy Ballgame retiring. They're showing Inning 8 on Thursday. I'm still keeping my fingers crossed that I appear in the new episode (Inning 10). Here's a previously unseen pic I took of Burns on the day I was at Fenway while he was filming: 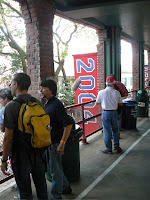 MLB Network is following tonight's episode with the 1959 World Series. And it's in color! It seems like all the World Series footage was black & white before '67, but I guess not. They just showed the famous Al Smith beer shower. I love this stuff.