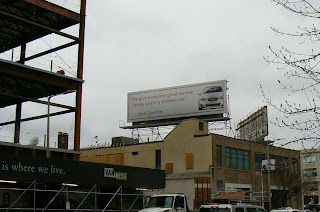 Parked in the four-hour meters over by Simmons. A buck seventy-five in quarters and a mile walk for exercise, not a bad deal. Coming in from that way, we saw some major new buildings going up along with this nice billboard. Mom and Charlie went to Remy's, and I headed over to The Ballpark. 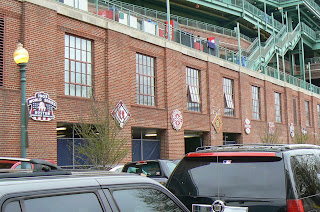 Hadn't yet seen the latest addition to the championships on the Van Ness side. Here they all are, and at far right.... 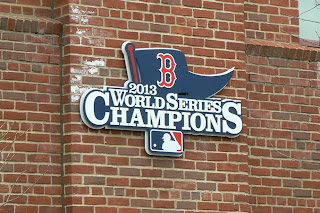 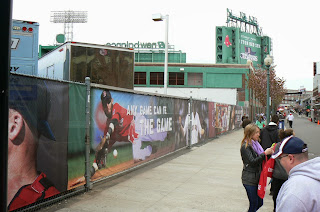 Came around to Lansdowne for the Red Sox Nation early entry. Note the back of the scoreboard. 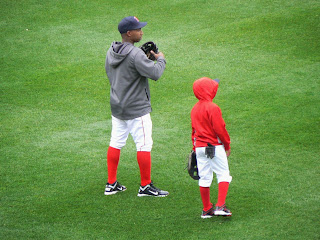 Sox were taking BP despite the possible showers. Here's Jon Herrera and, I presume, his son. 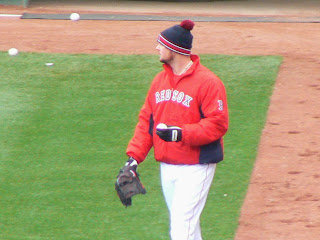 Lester in the winter gear. I feel like this night was even colder than Opening Day. 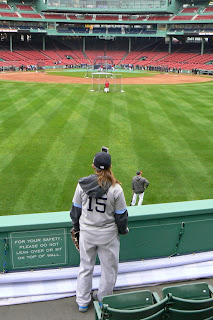 The only other sign of humanity in the centerfield bleachers was this person. Look closely at her head.... 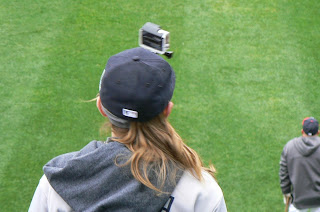 It's a GoPro. I asked her about it, and it turns out she was Fenway Ballhawk. Check out her blog here. How cool is it to be recording your ball snagging from the hat-brim point of view? 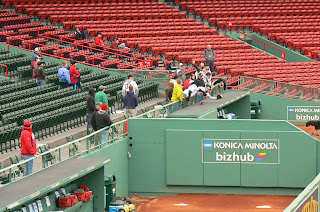 There was a small crowd in right, and at one point Papi launched one out there. I figured I'd snap away in case somebody made a great catch or something...and someone totally did! I can't believe I got the moment he caught it, not blurred at all. Later I went and found the guy, got his e-mail address, and sent him the pic. Had to do it. He and his friends were psyched I captured the moment. 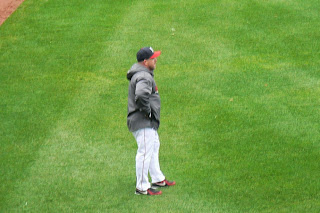 Why am I showing you this picture of first base coach Arnie Beyeler? 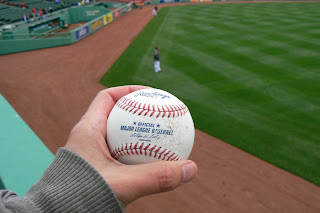 Because I got this ball from him, the 29th of my career. (Or 31st, if I end up including the two official MLB balls I got at the season-ticket batting practice event last year, time will tell....) Earlier I had yelled his name, and a few minutes later he looked up and gave me a nod. Knowing I'd established rapport, the next time he got a ball, I politely asked him for it, and he tossed it up. Always a little nervous when they try to reach you at 18 feet--and a couple random teens meandered toward me so I thought there might be a fight for a ball that Arnie had clearly promised me--but I was in the far corner by the centerfield camera well, so I knew nobody could get past me, and I squeezed the perfect toss before thanking Beyeler and mumbling something about Pawtucket that he probably didn't hear. Mostly clean ball, non-commemorative, but a little scuff and tiny grass stain, so that's something. A description of all the balls I've retrieved is in this post, updated through 2012. It stinks that when I showed them "all" at Zack Hample's blog, I only had 6 at the time. Maybe he'll do another "show us your balls" posts at some point. It also stinks that I never seem to keep track of who hit the balls (if applicable) that were tossed to me. Like this Arnie one, I'd guess it was a Papi liner that went to the wall which he picked up, but I can't be sure. I never seem to even try to make a note of where the ball had come from at the time. Oh well. 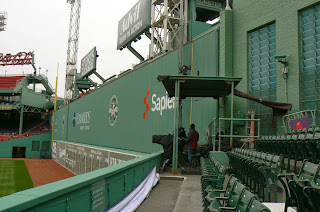 The corner spot where I got that ball--also note the banner on the floor which would later be thrown over the edge. 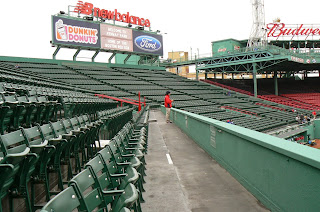 Now the Red Sox were done hitting, and, TERRibly, the Rays did not take BP. You can see how empty the park still was at this point. 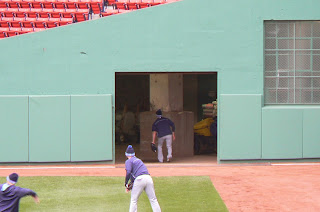 This Ray had to get an errant throw that went under the stands. 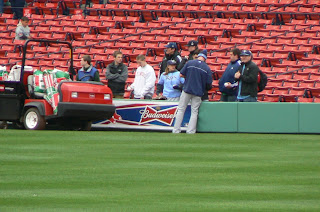 Fenway Ballhawk got into her Rays gear and went over to the third base side, while I stayed in CF for a few more minutes. 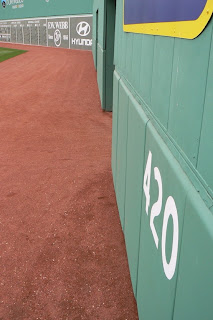 I tried for a stray ball which had been sitting on the track for a long time, but a security guy illegally took it. I was left to take pictures from the absolute deepest part of the field. 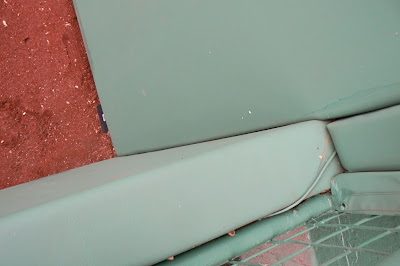 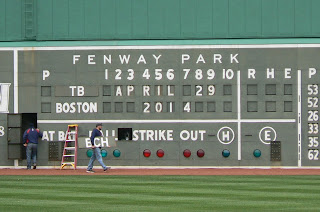 Slowly made my way around, and got this token scoreboard shot. What is BCH? A quick webby hunt tells me BC High played hockey at Fenway, so it's probably that. 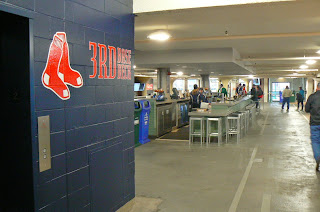 My first time checking out the new bar at the 3rd Base Deck. Nice new blue paint job by the elevator too. 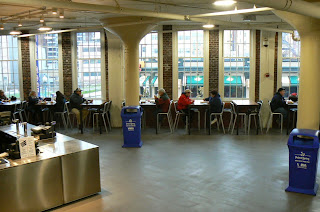 And tables along that wall where you can look out onto Lansdowne & Brookline. 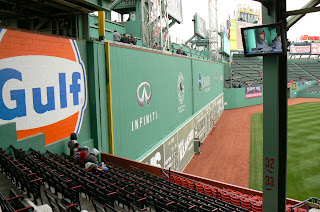 Figured I'd get this classic shot while I was over there. Also note the banner in CF that I'd earlier seen sleeping. 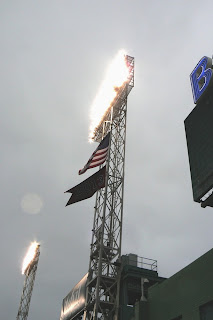 Came all the way back to the bleachers to test whether or not it was worth sitting out there in the cold for the whole game. The test failed. Knowing there'd be some empties on this horribly cold night, I decided we'd try for good seats for as long as we could. But in the meantime, I got this shot of the championship flag and age-challenged glory. 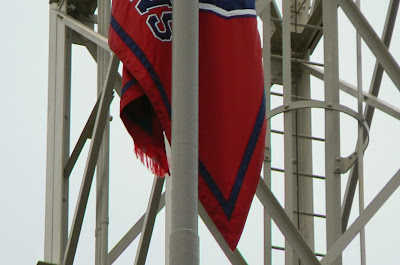 Are the Yanks champions? I'm a frayed knot. Meaning flag. 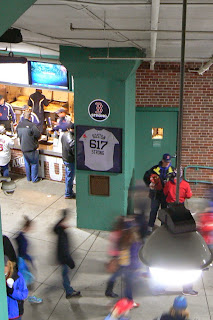 As I went back toward the good seats for the final time, I got a shot of this Boston Strong jersey. I actually stopped into the Yawkey Way Store just before the game, and I guess that room in the back really is a "game-used/team-issued" shop now. There's some great stuff in there. It's like a year-round Yard Sale. It all makes sense, because they put that other '47 shop in right field, meaning this space--the original '47 space--was now available for something.

Check back for Part 2, pics from the actual game and the story of how I got my first-ever GAME BALL!

Comments:
What a tease...I was reading and anxiously awaiting the game-ball story. I guess I'll have to wait.

Yeah I just couldn't keep this to one post....too many damn pictures.

Are they selling game used items at yard sale prices or are they still asking premium prices?The price of game used items in the cabinets in the store was very high when we were there a couple of years ago.
Great photos,acting as an impetus to save for that next holiday..
Mark UK

Is it okay to use some of the photos that you took of me?

Jacqui: Of course! Was good meeting you.

Mike: Thanks! It's funny, me, you and Jacqui all kind of consider that CF front corner "our spot."

Mark UK: I feel like the game jerseys and bats are actually pretty good deals, even star players. The playoff stuff is expensive though. Then you've got cheap stuff of no-name guys. And there's a tiny bit of game-used stuff out in that right field '47 shop too.

Thanks Jere,hopefully we will get over in late August and check it out then,