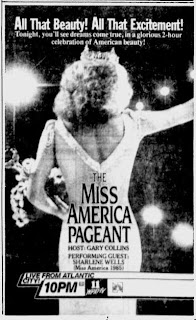 I have this childhood memory. It's night time. My parents are downstairs in the family room watching the Miss America pageant. I'm in the living room with the radio, probably in that spot after going around the house trying to get the best reception from WTIC-1080. I'm giving them updates on the Red Sox game. Dwight Evans hits a home run, and Joe Castiglione (maybe Ken Coleman--my all-time favorite voice--but in my head I hear Joe) calls it: "and it's out to sea!" I let my parents know about the dong complete with description. If I had to guess the opponent, I'd say it was the Brewers.

Tonight (unless I've done this before and blogged about it, but I don't think so) it hits me that I can look up the Miss America pageant dates, and then cross-check the Red Sox games played on those dates, and whichever one has a Dewey dong is my game.

I figure it was '83 at the earliest (Castiglione's first year), and by '89 I would have been starting high school so that's way too late. I start with '83 and then move to '84. No Evans blasts, and they're both Saturday afternoon games anyway. Then I get to '85. September 14th, the day of that year's pageant. A night game, in Milwaukee. I immediately see that Evans led off and went 2 for 6 with 2 runs and 2 ribbies. Looks like dong city to me. Sure enough, there it is, a two-run homer in the 11th inning, the difference in a 10-8 win. I also believe Castig would have had that call, as I think the play-by-play duties went Coleman 1-4, Castig 5-7, Coleman 8-9 and maybe even 10, then back to Joe....

So that has to be my game, but I have to verify the times. Going to the Milwaukee Journal, I see Miss America aired that night at 9 central. The Sox-Brewers game (not on TV in Milwaukee) started at 7:30. The game went 3 hours and 19 minutes, meaning the dong was hit around 10:30. So that's 11:30 eastern, an hour and a half into the two-hour Miss America broadcast.

It makes sense. It was a Saturday night, I'd just started fifth grade, and though I still had a "bedtime" at that age, it was clearly a "special" night, with mom and dad watching a yearly event that started late, so I was left to screw around upstairs, glued to an extra-inning game with the Sox 20 games out of first. I also see that both Golden Girls and 227 had their series premieres that night, and I absolutely would have watched those. I remember the build-up to 227 that summer, with a rap song made just for the commercial: "227 is a comedy, about Marla Gibbs and her family...."

So the night of September 14th, 1985, probably went something like this:

8:00-10:00: Jere watches Gimme A Break, Facts of Life, Golden Girls, and 227.
10:00: Mom and dad take over the downstairs TV, Jere goes to the radio for some wild and wooly Red Sox-Brewers action.
11:30: Evans goes "out to sea" in the top of the 11th. Jere updates parents who are watching Miss America. Parents most likely tell Jere to get to bed at that point, Jere surely listens to the bottom of the 11th before turning in. (Note: Billy Jo Robidoux played in this game as a Brewer, and as I type this, our new-ish kitten, Billy Jo Strummer Robidoux, is sleeping on my lap. It was also the debut game for Bill Wegman, who shares a name with the dog photographer.) 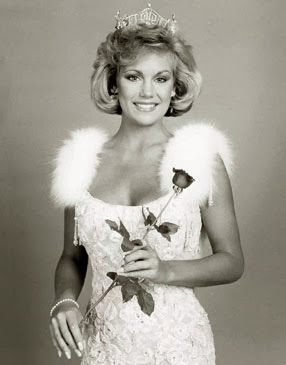 Comments:
TV ad courtesy Pittsburgh Press. Photo from CMT.com, and under it they say "Photo credit:" with nothing after it.... Maybe Cosmo Kramer knows who shot it.

Mom here: Funniest night on TV watching Burt Parks try to keep a straight face while asking the contestants inane questions. Since it was live TV, there's be a glitch once in a while and Burt would come out and sing. He'd sing whatever he felt like. Once he came out doing a sort of Michael Jackson-backward slide move and singing, "Who's that knockin' at my doe..." a little tribute to the Beatles. Once he got cut off just when he started singing, "There she is, Miss America..." because time had run out. So Johnny Carson had him on the next night so he could sing the entire song. Burt Parks was a lot like Dick Clark--utterly untalented but with an endearing charm. But thanks for the game updates, Jere.

Great story...love your posts man. I hope you don't mind that I have posted links to your blog on mine.