Last Few From The City 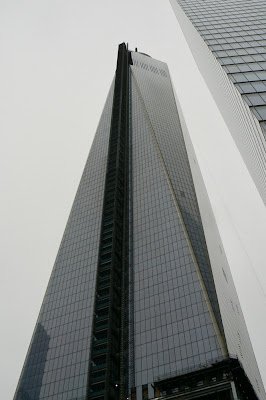 Going back to last Sunday now.... so after Chan and I got off that special holiday train, we walked over to the World Trade Center. I hadn't seen the new WTC 1 in person in a while so we decided to go get a peek. Here's a shot from right near the base of it. On a gray day, it's pretty drab. And if you're thinking "it doesn't look that tall," remember that this shot cuts off about 20 floors. 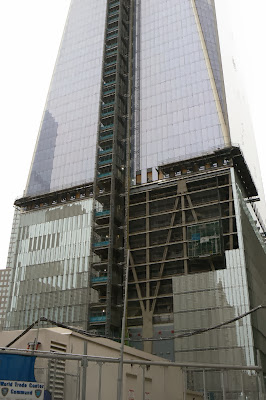 The aforementioned base. By the way, that thing running up the entire side of the building is not part of it. 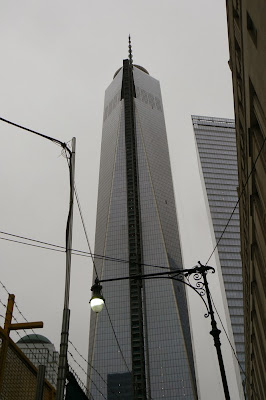 From a little farther away, you can see the spire. 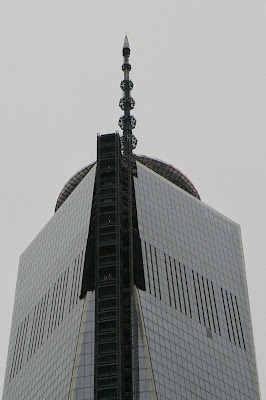 Here's a closer look. I'm not really a fan. In the renderings, I guess that round thing did exist, but I never really noticed it, because of the nice bright, sleek spire above. But in reality we ended up with a Greatest American Hero spaceship topped with an Elroy Jetson antenna. Now on paper, that sounds like the coolest building in the world. But in the real world, much like Ralph Hinkley/Hanley, it doesn't fly...too well. And I like it even less when seen from very far away--when you find out it's a triple-decker spaceship. Now I'm only an armchair architecture critic, but I don't think it fits at all with the tower itself. It's almost like Nathan Lane in The Birdcage, showing off his "manly" suit, only to reveal he's wearing pink socks. Is there a chance this tower is really from another planet, pretending he's the Empire State Building's Earthly Uncle Al? "Well one must have a hint of outer space...." 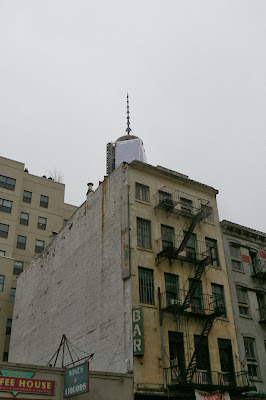 I liked this view from up the street, showing old buildings with the new towering over it. I also like bars called "Bar." 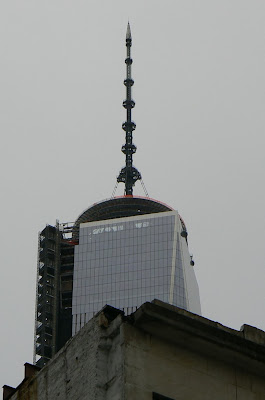 Same spot, close-up of "the mothership." 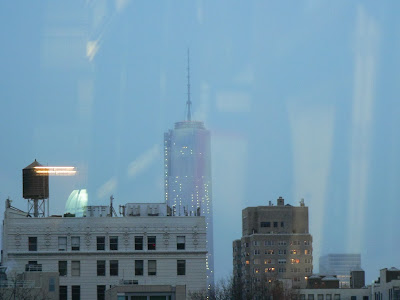 And here it is from the Union Square B & N--note the triple-layer space cake. And the window reflection. And also note the tower is two miles from the building in the foreground.

I think overall I'm going to like this building a lot more on a sunny day, as it reflects the bright blue sky in its glass. I mean look at this old rendering: 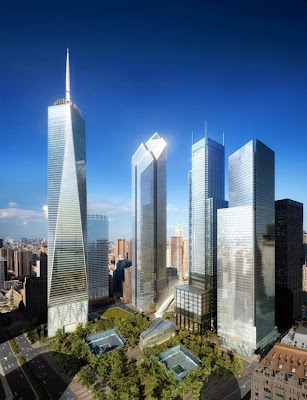 Like I said, I had never even noticed the spiked dog collar, probably because of the sleekness of the rest of it, including the non-Jetson spire.

And here's the evolution of the design--you can see the radical change in '05 to a more basic structure. 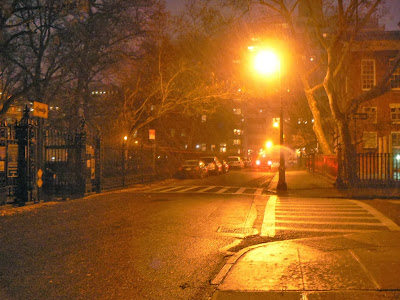 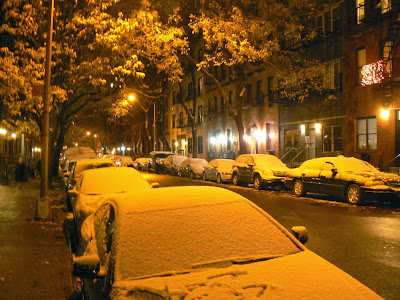 Which left us with this. Love NYC in the snow.