As a 10-game plan holder, last year I got to take five swings on the Fenway field. After the team won the World Series this year, I had no expectations of the team doing the BP again. So I was surprised and excited to see "the e-mail" earlier this month. This year it was "10 pitches" as opposed to "5 swings." I got a Tuesday night time slot and prepared to brave the cold and possible snow. And I gave my swings to my new friend, the 9-year-old slugger Nathan. He came out from a little town in New York State on the Vermont border with his father and older brother Kyle. I drove up from PVD to meet up with them.... 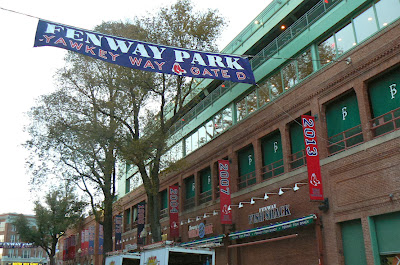 I arrived a little early and got my first look at the new cloth-ware on Yawkey Way. 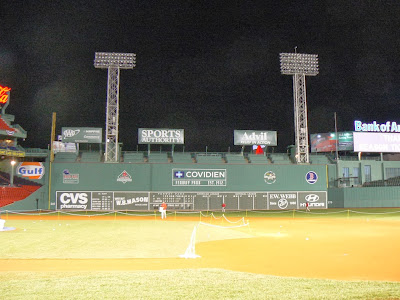 The flurries cleared out earlier, but it was in the 20s by 8 p.m. when Nathan took his cuts. I don't know how he gripped the bat. I don't know how any of us gripped our cameras either. (The lights were on throughout the park except the two towers you see, creating the cool effect of the park being lit up with the lights off. Also note the linescore from World Series Game 6, still up on the board.) 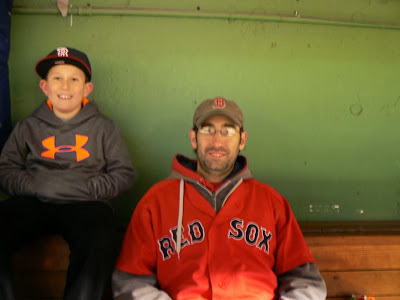 Here I am with Nathan in the Red Sox dugout. Part of the deal is you get to go inside both dugouts and clubhouses. He's looking happy because he just got to take batting practice at Fenway F***ing Park! It's funny, when I told him, "you're gonna hit in the exact spot where Big Papi hits," he said, "Big Papi is lefty." A kid after my own proofreading heart! So I corrected myself: "the exact spot where Dustin Pedroia hits." 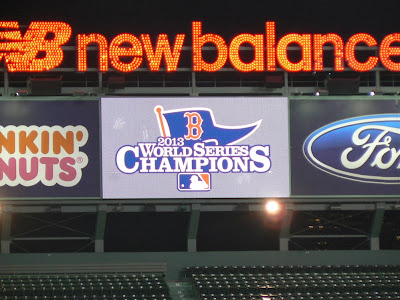 The World Series Champs logo up on the board. Moving on... But wait, Jere, you silently say, you said the kid just took some swings, where are they? A good question, reader. It should be noted that I was armed with both regular and video camera on this frigid night. Later I'll be making a video of the actual hitting part, the walk to the field, etc. Stay tuned. 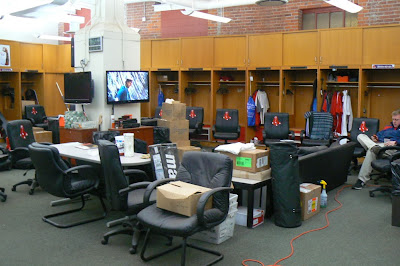 Now we're in the Red Sox clubhouse. It was doubly sweet as not only were we in the clubhouse, but we finally got a chance to warm up. 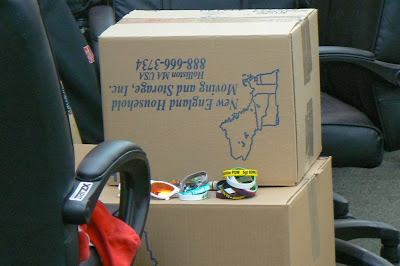 Some players' stuff was still there. Here's a pile of wristbands and some sunglasses at Pedroia's locker. 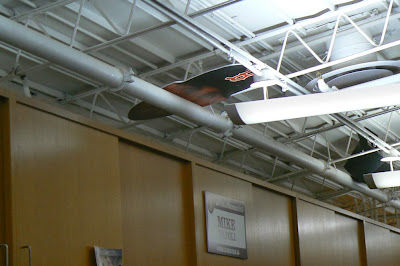 Here's a Middlebrooks head up in the rafters. 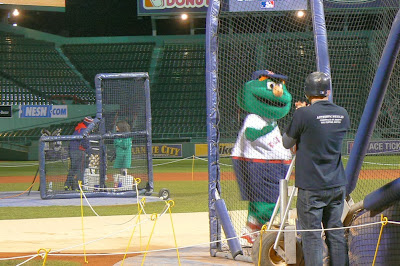 We were on our way out through the stands when we decided to go back on the field. And look who was taking cuts! Wally hit the ball, too. Into the outfield. (Am I more impressed that a green giant can hit or that a man in an unwieldy mascot suit can hit?)


Video I shot on the still-cam of the monster in the cage. 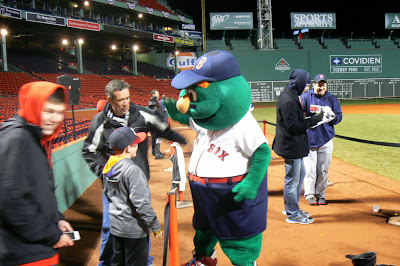 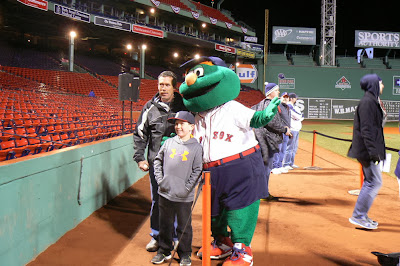 Posing with Wally. (Note: Later, while in the stands watching the last few people hit, Wally came up to me with this gesture as if he knew me or something. Like he was specifically happy to see me. I guess this is what mascots do, but it felt different. I feel like the man inside the Wally costume knew me. But he didn't break character so I guess I'll never know.) 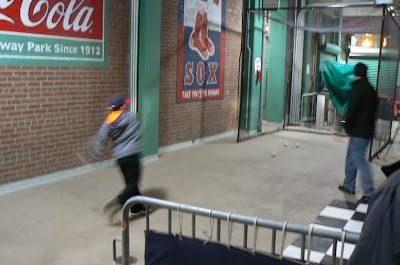 Now under the stands again, Nathan throws for the speed gun. I think he hit 40, which is about what I could do with my lingering rotator cuff issues from '88. 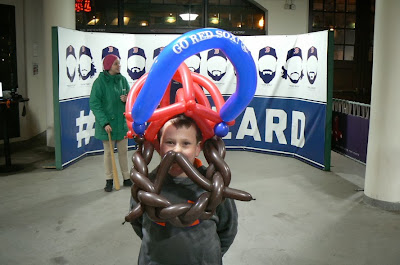 Even the balloon guys are all beardy these days. 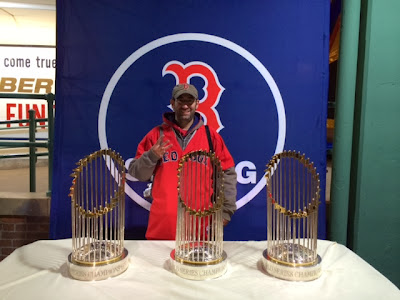 Me with the three recent trophies. (Photo by Kyle.) As it was the end of the night, I got to watch as six guys put little blue jammies on the trophies and whisked them away: 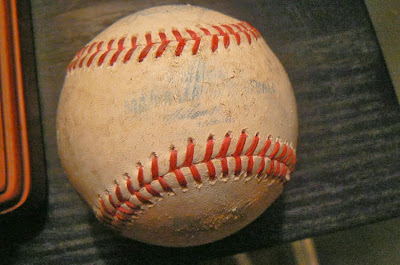 Last year I didn't get any actual balls from the event. I had this idea of maybe picking two up by the cage and rolling them back to the mound, but covertly keeping one in my sleeve and taking it home. This year, after Nathan hit, they gave him a ball. I was really glad to see that. As we stood in the third base stands, another ball came into the crowd. Some guy beat Nathan to it, but gave it to him. Nathan was nice enough to come right to me and give me that ball. 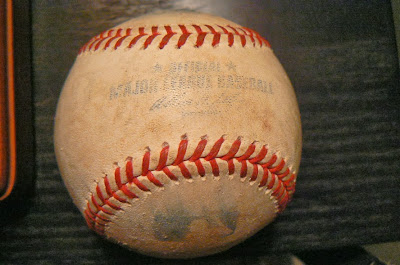 Then a ball came screaming right at me--I didn't even have a chance to move and my hands were full of cameras, but fortunately it smacked the concrete behind me instead of my face. I got that ball and gave it to Kyle. Now only dad needed a ball, and at that moment, an employee started going around shagging the last of the balls in the outfield, and gave us one. So we all got hooked up. But since we were the only ones left, and there were still plenty of balls on that field, we stayed until another employee gave another ball to Nate, who promptly and selflessly put it right into my hand. As you can see, these things are beat to hell! One of them is almost completely hiding the fact that it's a major league baseball at this point.

So we all had a blast. It was great meeting those guys--the dad knew all about the Bernie Carbo/Bill Lee era so we got to talk about that a lot. Kyle told me that he and his dad didn't tell Nathan where he was going until that day when they picked him up from school. What a surprise.... Here's hoping the Red Sox continue the tradition next year!

In case you missed it, here are my posts from last year's event: Part 1 (in which you see they had the entire seating bowl open, unlike this year (boo)), and Part 2 (which shows the actual hitting).

Comments:
Now that my lurking cover is blown, I can comment...

Great photos Jere, this looks like it was alot of fun! The shot of the park at night but without the big lights on is really unique. Here is my question, did you notice #'s on the helmets they gave you to wear? I see one on the guy in your Wally pic. Looks like # twenty something? Funny that they just pulled player helmets... No postseason logos and they're all using the carbon-fibre ones now, so a leftover from 2012?

Yeah I noticed that # too! Looking back at last year's shots, you can tell my helmet had a B on it but you can't tell if there's a number. I was so "in the zone" that I didn't even think to check or probably even realize I may have had a player helmet on.

Like you suggested, I'd guess these were just older player helmets they have lying around.

By the way, I noticed in the Yawkey Way Store that they had a lot of game-used jerseys, some of the same stash from the Yard Sales. Mainly 2012 ones, which have the 100 patch. I'd love to get one of those and if I had any money at all I probably would have got one of the cheaper ones that are just ST of BP from no-names but still have the patch. Many were $100 but some were $75 and maybe some $50s.

Jere, I managed to get a ball the old fashioned way; when I was done I reached down and picked one up. They didn't seem to care.

Weird, they usually just use the leftover batboy ones for things like fantasy camps, etc. The players really only use 1 helmet per season (unless it cracks)...

Those white 2012 jerseys in the store are a "steal" at $100, I believe this is around or basically cost to the team. In the old days they would have pulled the patches off and used the jerseys either in ST or at the start of the next season. But they just pulled all of them and replaced everything after 2012. They also oddly patched everything they had in storage, so I saw some '08 jerseys in there with the 100th patches on them.

I'd hope they'd be even cheaper at the start of 2014, since whatever is left has been there for awhile.

Mike: Nice. I should have done that last year.

John: That's nuts they would patch pre-2012 stuff! I had not seen that.