Red Sox dominate one of the best teams in baseball for a series win to hold big lead in division! Next up on WEEI: We'll talk about three negatives from last night's win, we'll compare this September collapse to those of the past, and we'll tell you how you're not "all in" or "on board" with the team you've loved all your life! Stay tuned! 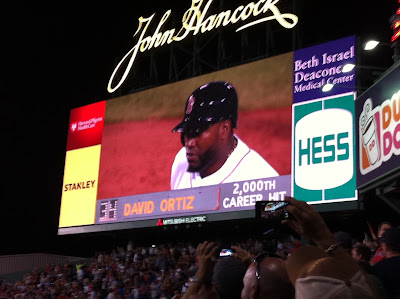 Back to reality, that was a sweet fucking win. My mom, who seems to go to the most incredible games, was there with Charlie, and they sent me this pic from the bleachers. I love how Papi's 2000th hit was a double, putting him right at the middle of the field for the inevitable standing ovation. And then they played that song from 2001 for his 2,001st. Nice touch. I had been talking about that movie a few hours before. That song also has its place in team history as it was played for the flag-unfurling part of the ring ceremony in 2005.

BROOKS WAS HERE again! Will's grand slam turned a close game into a 10-4 one, good buddy, as part of an 8-run sixth, and we cruised from there, tacking on another decade. We hit EIGHT dongs in the game, tying a club record. What a way to head into 4 with the Yanks in The Bronx.

Don't even wanna think about the usual foolery tonight--not even the part where Tom Caron said that Papi's six hitless games in a row recently "had New England in an uproar."

Comments:
The other thing I won't mention is when Don was reading the probable pitchers, got to Kuroda, and said in this really surprised voice how his last outing was a rough one. He might as well wear a sign around his neck that says "I never pay attention ever." Kuroda's last start was GOOD compared tot he even shittier ones he'd been barfing out all August, including one against the Red Sox. Yet Don has missed this huge storyline.

And then Eck with the line about Koji "either trying to get out of the way or catch" that home run. When's the last time you tried to avoid a ball over your head by jumping and extending your arm towards it?

A Space Odyssey indeed; they could only enhance it by having Bill Lee coming out in his astronaut suit. I especially liked that Papi's 2000th got an RBI, too - very appropriate.

I was at that game. It was awesome!