Red Sox Win, And Other Stuff

Some weird stuff tonight, including a dong - turned-inside-the-park(ish)-dong - reverted-to-regular-dong, another catcher's interference with Ellsbury* up, and Papi turning around and batting right-handed against Bob Phonebox:

*A few days ago, Jacoby swung and then did the "look back," but NESN said nothing, and the ump didn't call it. May have even been the final out of a game. Anyone remember this?

Anyway, we won, so we stay a half-game out, since the Yanks got laughed out of their own park today by Tampa's pitcher. Sterling is so funny when he talks about how the Yankees "don't score any runs," and then of course talks about it again and again and again and says how he's beating a dead horse but just keeps on saying it. 0-2 for them in the Sorry Asshole Havana Nights Era. We're up 4 on the O's and 7.5 on NY. 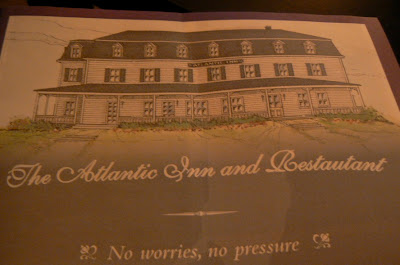 Saw this on page 3 of a little magazine about Block Island. If you own a restaurant, you better damn well know how to spell "restaurant." Even if you don't, and you truly don't care and choose to just concentrate on running the place rather than spelling, I'd think you'd want to pay someone who does know how to spell it, and use their services when placing your full-page ad in magazines. And tell them to especially get it right in that portion of the ad which shows the company's name. Maybe even do a double check.

Actually, I should be criticizing the typing and the lack of double-checking most of all--I doubt the owner or ad-maker actually thinks the word is pronounced with a T where that second R is supposed to be, but whatever, you get the point. Spell your own damn name right.

Comments:
Thought it was a generally good broadcast and enjoyed Remy's comments about how weird the game seemed. Too good to be true, though, as NESN failed to show the side view on the disputed ball four, instead opting to go with the swing-n-miss. Also disliked the Sox decision to sub Nava for Carp after how well Carp was hitting. Defensive substitute? Carp did pretty well there, as well. Is Nava faster? - daddybcat