Today Was Only Half Rainbows

Lester has a bad one and we lose 8-3. But don't worry, Sabathia's doing just as bad in Oakland, and the A's are way up on the Yanks, so we're gonna stay 2 games up. And that's all we need to say about tonight. Wednesday night it's Aceves against Archer. We've been good against rookie-ish types so hopefully we bounce back.

As you know, Newport has become my second home, as I work there six days a week. It really is a "playground for the rich," but that makes it all the more easy to relate to my fellow commoners when I'm there. Meaning the waitresses and clerks and whatnot. So it's cool. But it's a trip. Today, for example, I saw... 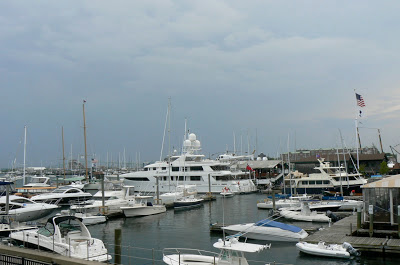 A bunch of boats, right? But upon closer inspection, hey, what's that on top of that one big-ass yacht? 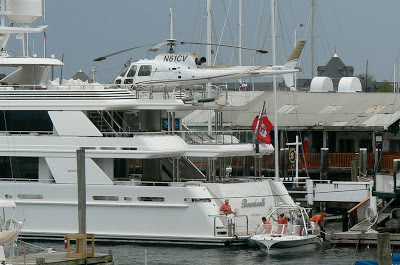 A freakin' helicopter! Imagine living like that? "What will we do with our helicopter when we go on vacation?" "Don't be silly, we'll bring it along!" Actually, if you think of it being "strapped to the hood," you can imagine this is the white trash of rich people, made fun of by all the richer rich people, who scoff at the Mercedes they have up on blocks in the yard as they drive by.

Bonus: Below the chopper, you can see a big screen TV. I zoomed in. You guessed it: Fox News.

Then on my way home, I crossed the Newport Bridge, leaving dark and rainy Newport. The sun was coming out right in front of me, so I knew if I could make it across before the rain stopped, I'd have a shot at capturing a rainbow looking back at Newport, hopefully with the bridge in the shot. I got across, turned around, and there she was: 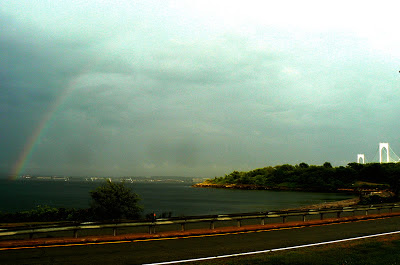 This is zoomed out all the way. I was lucky enough to get the bow-stalk and the bridge in the same shot. Unfortunately, this rainbow was only stalks. The other stalk was way to the other side of the bridge. Had it been a full bow, it would have been perfect. (But I would have needed to do a panorama.) Also, problem with bows is, they don't show up too well, at least at my photography expertise level, so I have to saturate the hell out of these and mess with other stuff to let you see the thing. 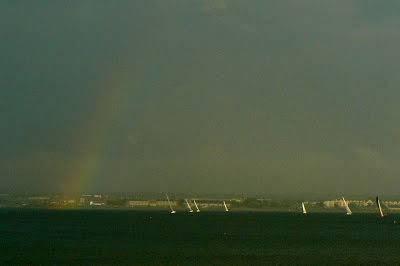 Here's a close-up of the left stalk, with all the sailboats seemingly bowing to it.

Then the sun continued to play tricks, first shining on the far tower of the bridge: 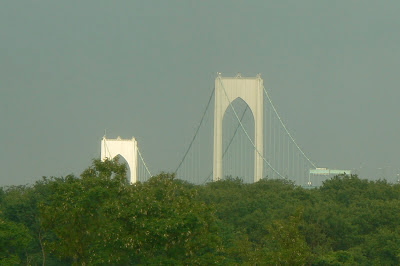 And then a few seconds later on the front tower: 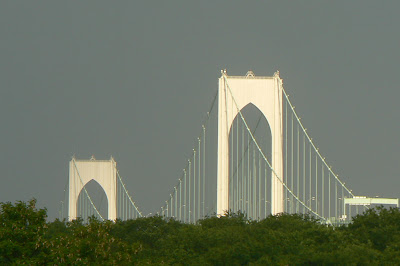 I just didn't have time to drive around until the bow was right behind the bridge, so I made sure to get the shots I had in front of me.

When I wrote the beginning of this post, it was 6-0 Athletics in the 7th. Checked to see the blowout final just now, and I see it's 6-4 in the ninth, Yanks with the tying run at the plate and two outs...and Hafner, leader of the Yanks' .240-Brigade, flies out to end it as I type! Perfect timing....