I took a risk writing "(Part 1 Of 4)" in the post title after game one. But it paid off as we indeed swept Houston. I was at Fenway in my game-worn Levangie jersey for the fourth and final game on Sunday. 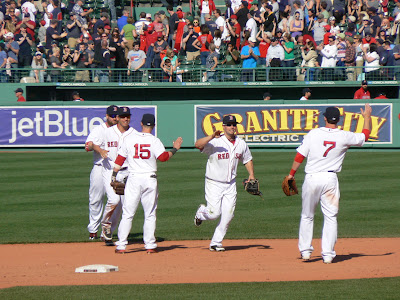 This was my second Fenway trip of 2013, but my first photo gallery. I'll do that other one someday. Above, Nava and the boys are happy after his game-ending diving catch. Now back to the beginning.... 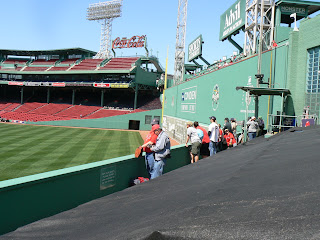 Got there a little after 11:00 a.m. using my RSN card. Expected to have endless room to roam out in CF, but...it was some kind of boy scout day! Every boy scout in New England seemed to be there, and they were all allowed in 2.5 hours early. There went my chances of getting a BP ball. (That plus the batter's eye, and the fact that only the Astros took BP anyway.) Above, the Eye to my right... 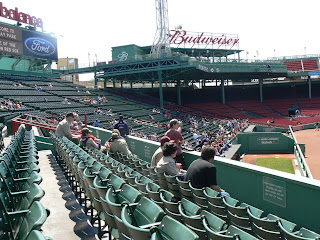 And center and right field packed to my left.

And blue skies (and flying ads) above. 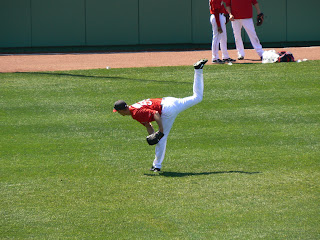 "Found out about Vigo, the Master of Evil, try to battle my boys? That's not legal." 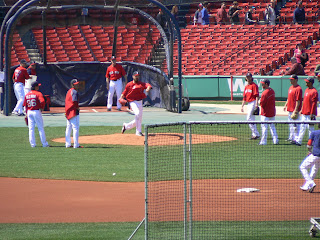 With our hitters not taking batting practice, the pitchers used the infield for fielding drills and bunting practice. Great to see them have to practice throws to second from the mound, as pitchers routinely throw the ball into center field on that play. Above, Andrew Miller makes the dreaded throw. 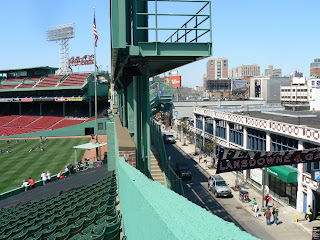 This is from what would have been my seat. Even though the sun was really nice out there, I decided to get closer to the field for the game. 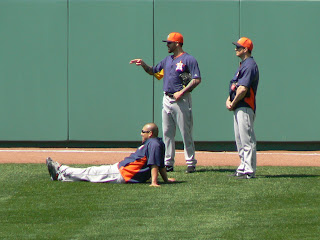 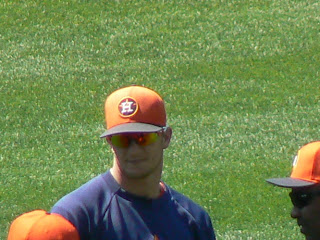 Close-up of their BP hat. 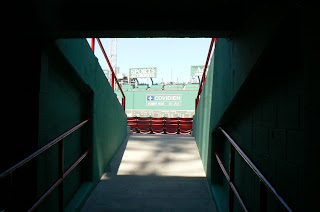 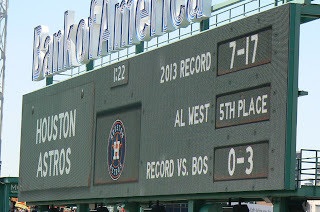 Houston's not doing so hot. 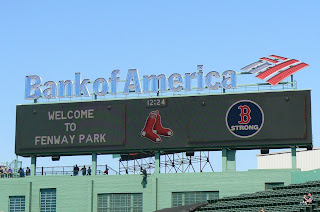 The B-Strong thing is everywhere. 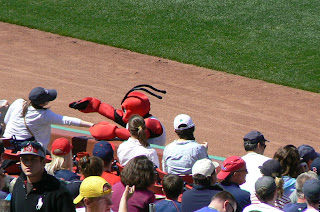 It was Maine Day. Here's a lobster, I assume. 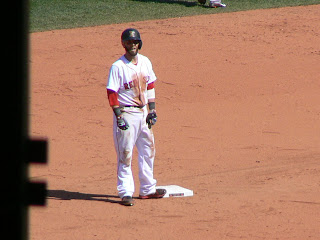 I ended up at various standing room spots until the end when I got really close. Here's a dirty Dustin after a double. 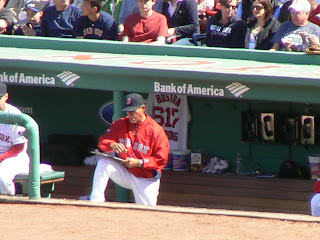 Here's "the jersey" in the dugout. 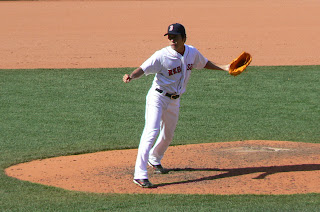 Uehara on the mound. 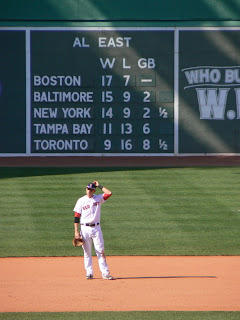 Middlebrooks, and the awesome standings. 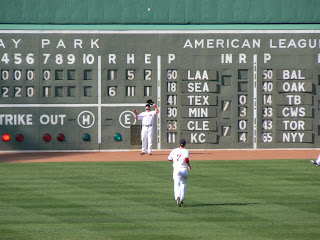 With a 6-1 lead, I was okay with going for a few in-play shots, super-rare for me as I like to watch the actual game with my eyes. 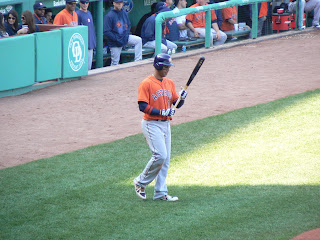 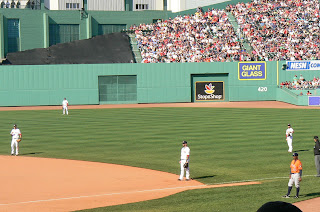 Middlebrooks to the right of second in the shift. He actually fielded a grounder over there today. 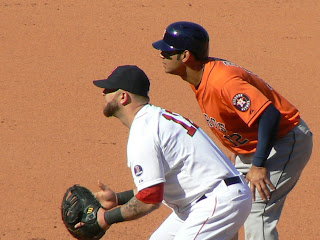 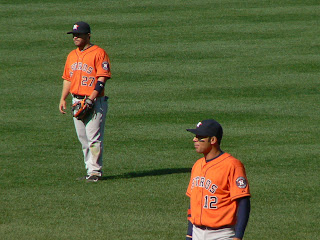 Altuve and Pena. Check out those orange unis. 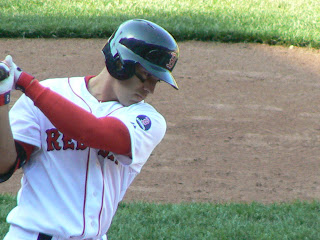 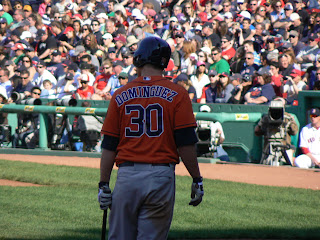 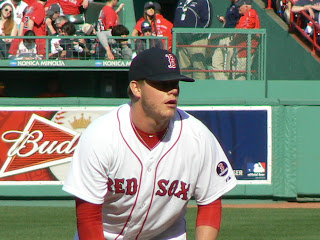 Andrew Bailey finished it out in a non-save sitch. 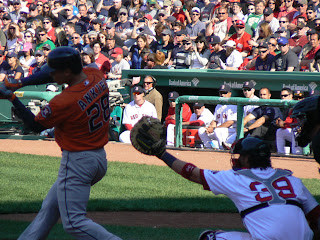 The focus on the crowd in the background was accidental...I mean on purpose! 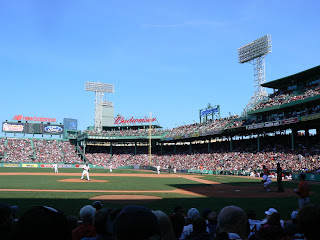 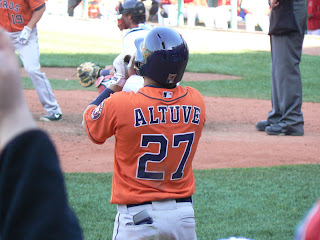 I think this might be the only good Astro but I'm not sure. 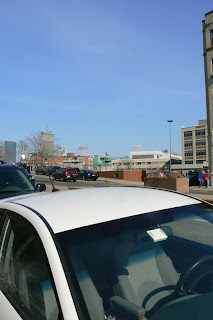 Walked out of the park at 4:32, in my car at 4:37, facing the right way to leave the area. This pic was supposed to show how close I parked to Fenway (my car is the white one at bottom) but it actually makes it look kinda far away. So, trust me, it was close. And free as you don't have to pay the meters on Sunday. Between my car and the park is a parking lot full of cars who paid $30 each instead of $0.

Comments:
It was a free preview day on MLB.tv. Nice to watch the game in HD instead of on the normal sketchy quality free sites. Remy said twice that Lackey got out of trouble in the 6th with an inning ending double play. Must have been counting the strike out as the front end of the DP. - daddybcat

Wait a second. Where some of those pictures taken from where I think they were taken from?

And daddybcat, I thought there was gonna be a DP, on the 6-4 that ended the inning when it was bases loaded. Because I thought there was one out. Maybe Remy did too and the woulda-been DP stuck in his head. Or maybe the umps only gave Houston two outs that inning, I could swear there was only one out on that ground ball.....

I have failed thee