December 2003: I was sitting at the bar at Zen Palate (awesome vegetarian restaurant) in NYC with Gumby and Chan, when a surprise guest came in and sat down to eat right next to Chan. It was Andre 3000 from OutKast. Seeing a celebrity is cool; having one sit next to you is cooler than bein' cool; and having it be the singer of the current #1 song in the USA, one which, for a change, you actually love, is ICE COLD.

Gumby, always on the cutting edge of technology, had a...get ready for a term whose life came and went in a flash...camera phone! So of course I start trying to get him to snap a clandestine pic of Andre, after my futile attempt to explain to Chan who was sitting next to him without using my out-loud voice. We got the shot, and I ended up asking for Andre's autograph, using the "it's for my girlfriend" excuse to seem less creepy. He was a true gentleman, personalized the autograph, and said "tell her I said hello."

Meanwhile, I've been waiting a decade to get a look at the picture. Gumby has been all over the world since then, so I rarely see him, but I always ask him about the pic, and he's always assured me it exists somewhere. But I gave up hope somewhere around '09.

Cut to Thursday night. I'm in Chan's apartment on my annual NYC/Norwalk March Madness trip, and he's going through all his old photos. He asks, Remember this one? And proceeds to show me...THE picture: 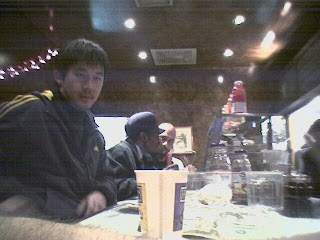 There they are! Chan at left, and Andre (with hat--the one he's wearing in this pic, I believe) and his buddy. (Not Big Boi.) So he e-mails the pic over to me, and, bonus, there's another shot with me in it too: 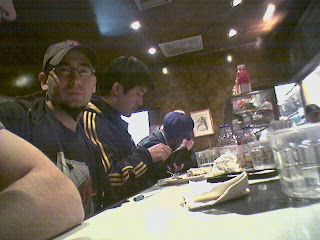 Too bad you can't see his face in that one. But check out my crazy devil beard!

Anyway, you gotta appreciate this whole Hey Ya situation: It was and still is so rare to hear a song on the radio you actually like, so this was a weird time where I loved that song and so did everyone else, and I could flip on the radio at any time and know I was gonna hear it. I'd be like, "it's the top of the hour, somebody's gotta be playing it"--and they'd ALL be playing it. And it wasn't like this was some group out of nowhere. I used to annoy Bruce at my job at the record store five years earlier by singing the line "Kast keeps it jumpin' like kanga-ROOS" constantly. Then in '02 I loved that song "The Whole World"--I remember talking to Pat about the Randy Moss reference in Tim's driveway at Pac-Men practice. Those guys were talented and deserved the success they ended up getting. And right at the height of it, there's the dude, two seats over at Zen Palate of all places. Here's the song in question, in case you forgot. (Even if you burned out on it, it was ten years ago, you can re-enjoy it. Come on, make it fun!)

Comments:
Best song of the '00s, in my opinion. I miss the Union Square Zen Palate, I think it's a Banana Republic or something now.

Yeah that one was key since it was in a great spot. (The Andre experience was at the Upper West Side one.)

I forgot to mention how that move was Classic Chan: Oh, yeah, I've had this pic all along. "But Chan, you've been hearing me ask Gumby to see that pic every time we've all been together for the last TEN years!"