Where Are They Now: Baby Cake Ford 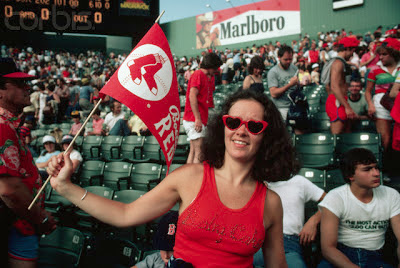 Answer: I have no idea. I made a half-hearted attempt to find Betsy Ford with an e-mail that was never returned. Anyway, I just think this picture is hilarious. I don't know if she was a fan who called herself Baby Cake and had some special bleacher routine, or if this photographer just happened to snap her and she just happened to be wearing a "Baby Cake" shirt. Let's find Baby Cake and ask her what the deal was!

PS: The game (which had just ended when the photo was taken) was June 22nd, 1980, as evidenced by the linescore behind her. Tony Perez's two-run dong in the 3rd broke a 2-2 tie, and the Sox held the lead the rest of the way. Mike Torrez scattered 13 hits over six and a third, and Tom Burgmeier pitched a perfect two and two thirds for the save. Red Sox 6, Angels 3.

Update: A few seconds after posting this, I Googled "Baby Cake Ford," and as you can see, this is the first time those words have ever been strung together in Internet history!

Update 2: A few seconds after that, I looked closely (for science) and noticed there's probably an S at the end of "Cake." So we should be looking for Baby Cakes Ford....

So we've got another good reliever*, as the Joel Hanrahan trade was made official today. In response, Hanrahan went and grabbed an old Red Sox logo off the Internet for his Twitter icon. Four years and two weeks since the change, nobody knows about it. Here's an old article about the big changeover which talks all about making the fonts the same and how important it was and all that...which everyone completely ignored.

*Hanrahan has officially been named the closer. Bailey must be pissed!

Shortly after midnight on Xmas Eve, the snow started to fall here in Rhode Island. Despite living in the northeast my whole life, I've rarely witnessed an Xmas snow, which of course is the kind that makes snow-folk come to life and make poor decisions regarding the well-being of children. I mean come on, even a refrigerated boxcar is better than exposure, and besides, you could always go up to the engineer and be like, "Look, we snuck onto this train. We admit that. But for this little girl's safety, would it be okay if she sits up here with you?" Where was I? Ah yes, a Christmas snow. Here's some video I shot a few minutes ago, which you can just play over and over, like that Yule Log thing, if you live in Hawaii or something. And if you do have snow where you are, try just watching it out your window in silence for a while instead of texting and stuff. Real life can be fun!

If you're celebrating this day, even if you're like me and don't care about the commercialism or the religious-ism of it, have a great day. Say hi to your family for me. If you have some other day where you do this stuff, have a great that day too. Say hi to your family on that day for me. If you celebrate nothing, have a great day every day, or never, it's your call. If you're an orphan, say hi to someone else's family for me. If you're one of those people who suffers from severe depression and the holidays make you suicidal, here's my advice. Run for president. Think about it--you're thinking you're gonna die anyway, right? Every day you decide to remain alive, you're playing with house money! So go try and do something crazy, knowing you've got nothing to lose. Even if you don't reach your goal, anything you do accomplish is gravy. And who knows, maybe it'll inspire you to stay alive and do other cool shit until you realize you might as well just stick with this life because it's the only one you've got. Man, I need to start a suicide hotline. Anyway, it's really none of my business so enjoy the snow, or the non-snow, and the holidays, or the regular days, and I'll see ya later. Ho ho ho, green giant! 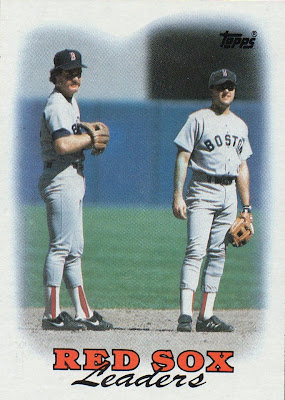 It's time once again to take a baseball card someone else was talking about and figure out the date of the photo!

1988 Topps Red Sox Leaders. I remember 1988 as if it were the moment when I started typing this sentence. I probably had ten of this card. (Meaning three but it felt like way more--you know how we humans are.)

Let's get down to biz. What jumps out at me right away is that it's Yankee Stadium. The wall, the angle, the stuff just above the wall... check out these shots to see the spot where white meets black (before they started putting ads out there) at the old Toilet Bowl:

And behind Righetti here. (1983) (Note in both shots that it's beneath the "BIG" in the BIG HIT mustard ad above the bleachers.)

Zoom out and see the white/black line again, right under the same spot on the BIG HIT sign. (1987)

In that wide shot, draw a line from the third base dugout area out to the white/black divider, and you've got Boggs and Owen on the left side of the infield, probably fielding between-inning grounders from the first baseman.

So that clinches the ballpark, now we move onto the date.

Card is from 1988, so it's likely a 1987 photo. But wait. Look at Spike Owen's jersey. He's got the BO on the left, and the STON on the right. We all know (right?) that Owen had switched to the BOS/TON style for the '87 season. Check out my thesis on those unis, which includes '88 cards of Owen and Boggs (with pics from '87 as proven by the 75th anniversary sleeve patch). You'll notice Owen has the BOS/TON style, which he doesn't in the card pictured here. (Also, they've both got facial hair in those '87 photos, unlike here.)

Since Spike Owen joined the Red Sox in mid-1986, that leaves only one year that this photo could have taken place. 1986.

And since the Red Sox only played one series in Yankee Stadium in 1986 after the Spike Owen trade, we know it has to be that series. September 12, 13, and 14.

Owen only appeared in two of those games. One was Friday night, the 12th. We've clearly got a day game here, though. That leaves one date: Saturday, September 13, 1986.

High was in the 80s that day at LaGua, according to the ever-important (for baseball photo detective work) Farmer's Almanac site. A little windy, too. No precipitation. And the Ft. Lauderdale Evening Independent's "traveler's forecast" for that day says "sunny and mild" for New York. The sun is out, and Boggs and Owen are dressed properly.

Owen left the game in the 8th (following his collision with Jim Rice, after which a fan took Jim's hat and he famously went into the stands after the guy--I believe fellow Sox bloggers John Quinn and Allan Wood were there that day), so this picture was taken somewhere between the first and seventh innings. That's as far as I can definitively go. But if I had to guess, based on the clean uniforms and my theory that baseball card photographers usually snap at the beginning of games, I'd say it's the first inning. The game started at 3:20 and it looks like a pretty low sun, so that matches up too.

But wait--what the hell are they looking at? It doesn't look like they're actually fielding grounders. I wondered if I could find in the game story something about an elephant entering the field behind home plate, causing the players to stop and watch. But then it hit me. They're looking toward their dugout. They're...waiting. For the first baseman! You can't take infield grounders from him if he isn't there. And why would he still be in the dugout while you're already out on the field? Because he made the last out of the previous inning! I checked the play-by-play again, and sure enough, Bill Buckner ended the first inning. He grounded out to first. So while Boggs (who led off the game by making an out) and Owen (whose spot the batting order wasn't even close to yet) were taking the field, the slow-footed Buckner probably hadn't even gotten back to the dugout yet. (Or was still waiting over by first base ripping his batting gloves off while another player ran his glove out to him.) In every other inning, Buckner would have been in the dugout ready to run out to his position as the last out was being made. Only after the top of the first would there have been a delay in him starting infield grounders.

So. Yankee Stadium. Saturday, September 13th, 1986, approximately 3:25 p.m., middle of the 1st, Red Sox 0, Yankees coming up to bat. The Yanks would win 11-6, after having gone ahead 9-0 before a 6-run Red Sox 6th, which Boggs started and ended. He would go 2 for 5, and Spike would go 0 for 2 with a sac fly. The Red Sox would go on to win the division, a fact largely ignored by Yankee fans who always said that the Red Sox never beat the Yanks "when it counted," in those pre-2004 days.

You know that ad where the antelopes have night-vision goggles and are able to mock a lion in the darkness? It doesn't work. Because everybody knows lions have excellent night vision.

I know, I know, I'm fine with antelopes wearing goggles and talking but this is what bothers me. I'm just sayin', in a world where that exists, the lion's still gonna see them standing right there and kill and eat them.

Years ago, I sat at Fenway Park with the person who I'd eventually start a relationship with. If I'd told her that night during the first pitch of the game

"seven years from now, we'll be living together, in Providence, and this batter will commit suicide by shooting himself in the head"

she wouldn't have believed me. Or, she would have because it would have been just a little too creepy and specific.

RIP Ryan Freel (pictured here in right field at the Royals-Sox game I went to in July of 2009, four years after the game mentioned above). 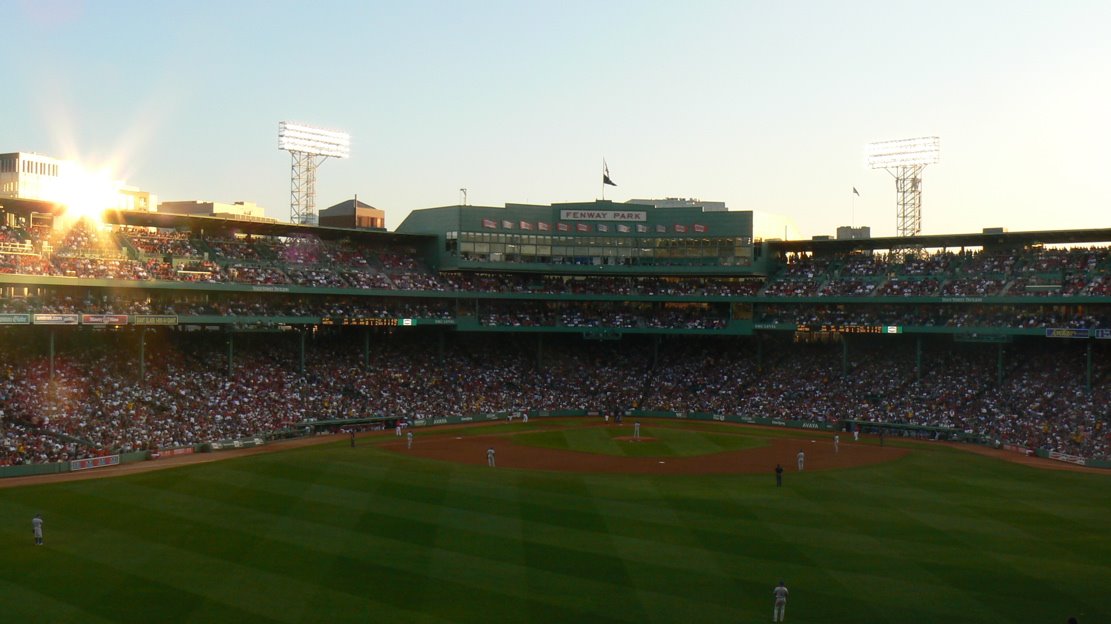 America's Sour-heart signs with a team that isn't mine.

(The Tito-Swish relationship will actually probably be pretty funny.)