Something To Read In The VWR: Fenway Holiday Bash/Yard Sale Photo Gallery

Good luck getting tickets today. As of this writing, the Ts are up on April/May, and Sox Pax, so you can get a head start if you know what you're doing. [Update, 1:37 a.m.: The September games are now showing the 1/26 date. We'll see if they change that tomorrow or if they've made the call to hold off on them till the big sale this year. Also, the game times are up. Still the usual 1:35/7:10 times for us, except, for some reason, one week in April, with three 6:30 games and a 4:05.]

Friday night I went to the free "Holiday Bash" at Fenway Park. First, here's a video of what I ended up bringing home, then it's on with the story.

I decided to park far away for some reason. If I'd known it was gonna be this cold, I wouldn't have. After a 25-minute walk with my hood up, I arrived at Gate B at 4:30 and was maybe 40 people from the front of the line. 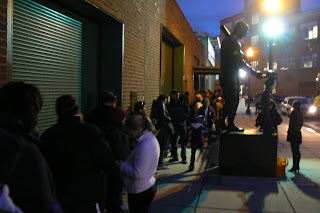 At 5:00, they opened the gates, I got inside, and I half-pretended like I was just "soaking in the festive atmosphere" when really I was trying to find the Yard Sale, and hoping not too many others had beaten me to it. They had it in this big room underneath the Royal Rooters Club behind the Big Concourse. People were already digging through the jersey boxes. And it was no coincidence that the first people to get there were the types to go through EVERY jersey. I was nervous: do I wait for them, or try to squeeze in, and if so, am I missing being first at some other area with possibly new and better stuff? I walked into a side room of photos and banners and way fewer bricks than usual. (Bricks were $10--I already have enough to build my own Fenway, and last year they were $5 anyway, so I moved on.) I was blowing it, finding nothing, knowing I'm wasting valuable time at this early hour. Then I went to the bats. I heard a guy say "Marty Barrett." Interesting. The Barrett cost $75. I was kind of thinking $50 was my limit, which was part of the reason I was now focusing on bats instead of jerseys, which were $65 and up. Suddenly, Gedman. Two of Rich's bats, both cracked. $50 each. I figured there were two so I could always go back. I kept looking. A Jody Reed. A Marc Sullivan. A broken bat with a "7" that could be Trot's. A Scutaro model with the name suspiciously scraped off, as if someone was trying to hide it from the feds. Some Joey Gathrights and Bill Halls. And who is Brad Hewitt? Finally it hit me that I needed to of course grab a Gedman. I chose one, and then later grabbed a bat handle with 22 on the knob ($10), and noticed a barrel with Ryan Kalish's name on it and no tag. Hopefully they'd let me keep both for a ten-spot. I went back to the banner room and found the one that's explained in the above video. Had to grab it for $10 even though they're usually a lot more. 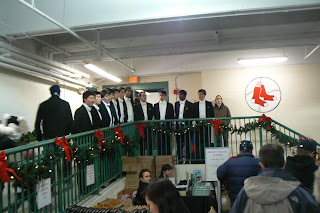 As I waited in line to buy, as carolers sang, I wondered why in the world I hadn't grabbed any of these team-signed big cardboard things for ONE dollar. The person ahead of me had several. I dropped the ball there. When I got to the cashier, she really thought the banner would be way more than the $10 I said I saw on there. She thought hundreds. She called across to somebody who yelled "fifty." But I kept standing there as she searched the thing, now with the guy looking on. He found the $10 price tag, and said, "ten." (I swear I didn't just slap it on there! But you know some assholes do that. And then sell the stuff.) 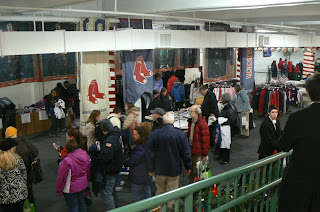 Then I asked about my bat pieces, and again the man was called over, and again agreed I only had to pay ten. Now I was carrying two bats worth of lumber, a gigantic balled-up banner, another free bag thing, and my camera. But the work was done. Now it was time to take some pics and see what else was going on. 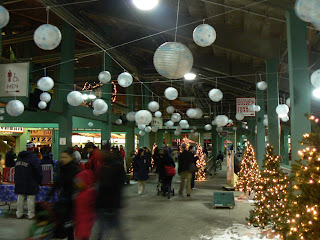 In the Big Concourse was the "Enchanted Village." I almost got run over by a slow-moving train! Basically, this whole thing is a way for anyone to experience what goes on at Christmas at Fenway without the ticket-buying. 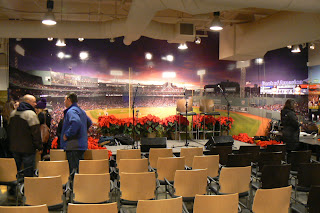 I then realized the Rooters Club itself was open so I headed up there. Mics were set up for radio interviews the next day at X@F. 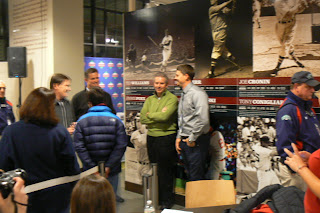 Terribly, this is the best shot I got of Lavarnway and Farrell who were taking pics with fans. They just finished up as I got there, and Farrell was being whisked away. A guy asked for an autograph, and he apologetically said how he's got "explicit instructions" to get the hell outta there. I know you're on a tight schedule here, Johnny, but sign! It's fucking Christmas! 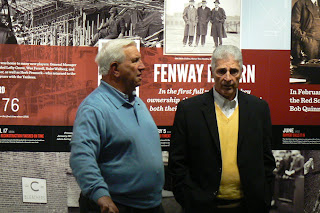 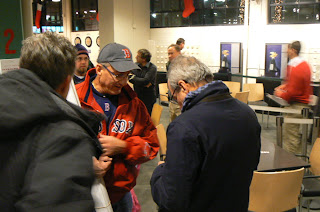 Larry Lucchino signing. I also saw Wally, but did not come across Santa Claus. 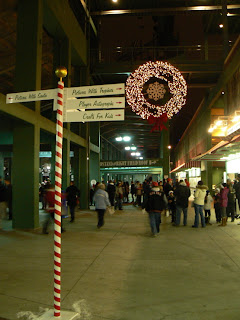 Okay, back downstairs for more Big Concourse decorations. The positioning of this shot makes it look like that wreath is tiny and attached to the pole, when it's actually gigantic and hanging much farther back. 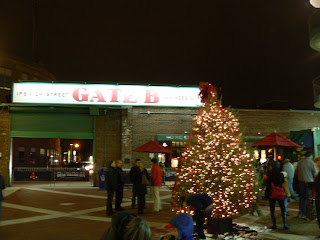 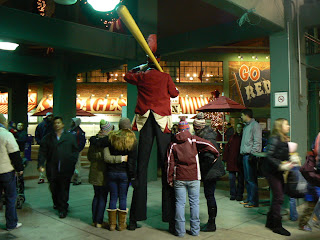 Big League Brian was all Nutcrackered out. 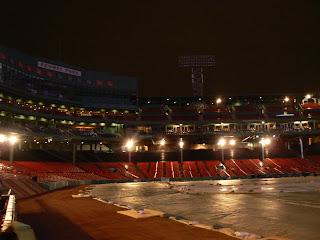 They let people out into the seats for a laser light show on the Monster. (Sounds like my perennial Monster Movies idea! Almost...) I didn't see the show, but I ran into Kelly O'Connor of sittingstill fame, and she said it wasn't any more exciting than any non-Pedroia laser show. Which is to say not that exciting after the first 30 seconds. 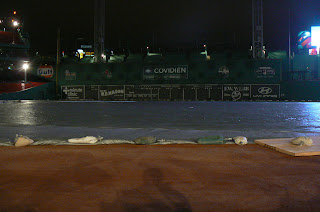 But it was cool to see Fenway in the dark. 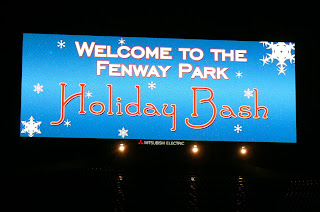 Was hard to get a pic of what was on the board without zooming. 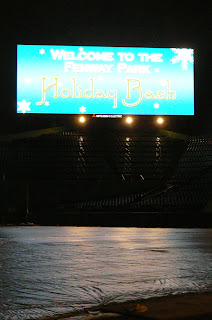 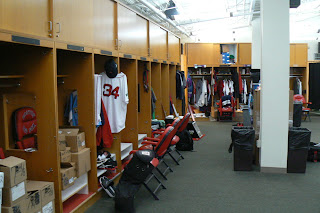 And we got to go in the clubhouse! After 35 years of totally never seeing the behind-the-scenes areas, I'm suddenly a regular. Thanks again to current ownership. 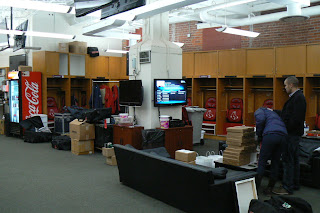 Somebody was having a pizza party in there. 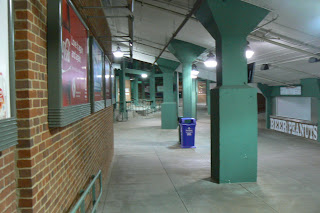 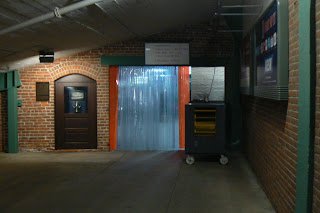 They had actually sealed off this area from the cold and put this big heat-blower in. That was really nice, what with the cold-ass coldness I mentioned earlier. 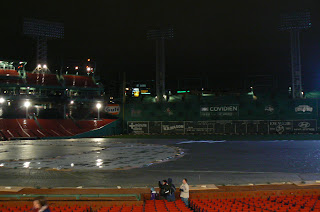 Had to take one last check out at the field on my way out. 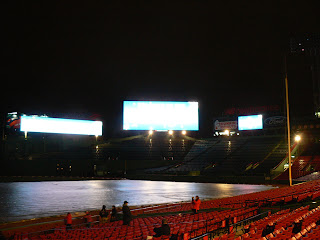 Good-bye until April, Fenway Park. Now I had another long walk, not only with the cold to deal with, but all the stuff I was schlepping around. Suddenly I'm walking past fancy restaurants in Brookline, in the dark, with a hood on, carrying a baseball bat. In November. There wasn't a lot of eye contact, let me tell you. At one point I tried to get a better grip on the Gedman bat by flipping it up and catching it since the other hand was full, and I snagged the broken part. But I was too cold to bleed! I just had a gash that eventually turned red. I finally unloaded the precious cargo at my car, and as I walked to Anna's Taqueria, I realized I was now a normal person again. Washing the wound in their bathroom cost me about 7 spots in line, but I was just happy to be somewhere warm. Mr. Brownstone greeted me on the radio as I headed back to Providence. Yow-za!

And now for the haul! 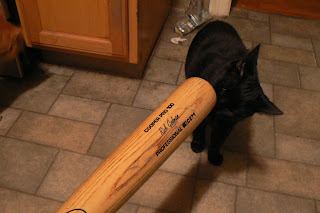 The Gedman bat. Nice wear, and of course the crack. 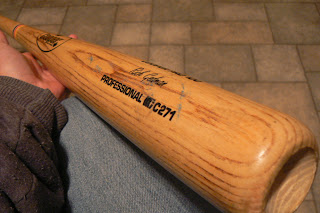 Look at the hollowed end. 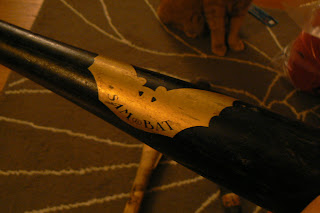 The Kalish barrel. Love that logo. I looked closely at this bat and saw stitch marks, including the low ones that cost this bat its life. 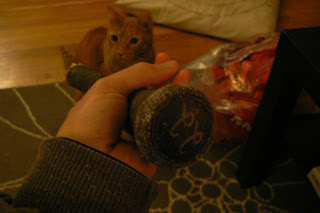 Finally, the handle, which for some reason I assumed was Bill Hall's. But there have been several #22s lately. And then I noticed it had a hologram! I looked up the number at mlb.com, and here's what popped up:

Comments:
Why on earth do the Sox still have Gedman bats lying around. Are they buying them back to sell in the yard sale?

Mom here.
That's it. Next year, I'm goin'.
(I thought only electric cords and cables did that tangle thing.)

Hey, Jere! I am the guy from Connecticut that e-mailed this past summer you about Indusrial Disease on the beginning of Soxcasts from the 80s. I am going to the Christmas at Fenway event today with my two young boys, and I wanted to know what they had for jerseys at the infamous Yard Sale. Anything from this past season with the 100th anniversary patch? Thanks, and happy holidays.

Hi! Once I decided I wasn't gonna get a jersey, I stopped looking through, so I didn't even look at that many, mostly just looked over people's shoulders at them. It looked like the same pile, but I think there were new red/green/blue jerseys probably from spring training. By the way this one woman was grabbing them to buy, I'd say that meant she was finding new stuff. I saw one sleeve patch that was something like "2 days at Fenway" or something. They also have a rack of autographed jerseys. Arroyo signed blank ones, $100 each. A lot of Youk and Beckett ones for more than that. One affordable one was an Alex Gonzalez for $75. Have fun!!!!!