Me In A Book 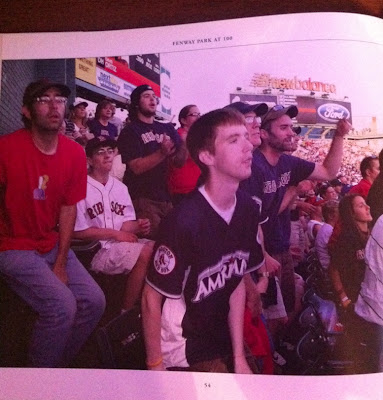 My friend John Quinn notified me that my picture is in a crowd shot in the book "Fenway at 100." He then sent me a picture he took of the page in question. I was expecting my face among hundreds of other fans, but as you can see, I'm pretty noticeable! I'm the guy at left, in the red "Marzipan" t-shirt I got in 2005.

I figured out which game it was--the Padres one in June 2011 where I met Zack Hample. Photo gallery here.

About the crowd around me at the far edge of the first bleacher section next to the camera well, I said at the time:

"It was great. The back wall behind me, nobody but the two cameramen to the right of me, a quiet father/teen son in front of me, and an empty seat on my left, followed by teen boys who just talked about stats all night. And, like I said, short-sleeve weather."

And there they all are! Along with me, on page 54. And in the link above, you see me and Zack, with me in the Marzipan shirt. I love that I get to revisit that moment through someone else's lens.

I only vaguely have a memory of a guy taking pics from right next to me in the aisle between section 34 and the camera well.

What we're reacting to is probably David Ortiz's first at bat, a single to left where a run came in from third but the other runners were held up. I don't know what the hell I'm doing with that hand, either grabbing for the seat or my camera or something, but I seem really into it, wondering if we're gonna send that second runner.

Anyway, I love that I'm in that book. Whenever I see Fenway crowd shots, I look for myself or people I know--and here I am all close-up-like. Awesome. Thanks again to John for spotting this.

Comments:
Looking good my man. Hopefully I'll see you selling your gf's soap (or is it candles? I always forget) when you visit Northampton, I'll be sure to chat you up.

How cool. Hope everyone clicks on the link because that was the day Tito signed my seat cushion and the picture you took of the cushion and me is at the link.

When am I selling soaps in Northampton? There was "Twist" which she never did, but now it's over.

Mom--yeah, that was a game we both went to, but you were sitting somewhere else. If I hadn't gotten that better seat, I never would have gotten into this book!

I should also add: If anyone's saying, Wait, David Ortiz wasn't hitting .399 in June--I gotta figure the stats on the board are some split, like, "David Ortiz vs. Lefties with Prosthetic Limbs, Career: .399, etc....."

Rad. Welcome to the famous club, my friend.

Awesomeness, as usual. It's terrific that you could figure out the game and then link to the write-up that describes your seat and views!

I finally saw the actual book--that pic is even bigger than I thought! So crazy....