Section 36 did another post about a baseball card, and this time offered me a direct challenge! Figure out the date/place, with only this to go by: 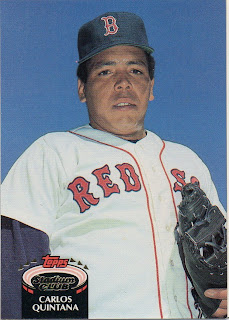 Carlos Quintana, 1992 Stadium Club. Could be anywhere in the world, from the Taj Mahal to the Grand Canyon, right? Wrong, mofo! Let's play the Feud...

First of all, we have to go under the assumption it's spring training. Just sky in the background, no giant stadium-like structure in the way. Besides, if you were in a major league park, you wouldn't purposely omit it from your shot, and if this were Fenway (it wouldn't be any other park since he has a home jersey on), the camera would have to be even lower than this one is to have the background be only sky.

Since it's a '92 card, the pic should be from '91. (It can't be '92 anyway--Quintana's car accident kept him out of camp that year. He showed up on March 18th with his X-rays in street clothes but didn't suit up at all that whole season.)

If you're on board with these theories, stay with me. If not, turn to page 18.

So it's spring training 1991. Now, what do we know about spring training? Well, the Red Sox by 1991 had started to wear the "spring training jerseys." The blue ones. This can be proven by baseball cards, pics from newspapers, etc. So why would Carlos be wearing a traditional home white jersey? That's right: Photo day!

I did a news search and I see that Nick Cafardo wrote an article on March 5th, 1991 talking about how Ellis Burks couldn't fit into his jersey for the yearbook photo as he'd bulked up in the offseason. That puts photo day at March 4th, a few days before the exhibition schedule kicked off that year.

"But Jere, what's with the long-sleeve undershirt? It's Florida! And using your teachings, I went to the Weather History page on almanac.com and it got up to 66.9 degrees that day in Winter Haven! You're wrong, detective boy! SUCK IT!"

First of all, calm down. Does all this angst stem from me calling you a mofo earlier? It was a term of endearment. Second of all, great job using the almanac, but...you didn't scroll down far enough. Yes it got up to 66.9, but the low was around 60, and if you go down to the wind speed, you'll see there were gusts of forty MPH that day. Low 60s plus 40-mph winds, on the patented Jere Wind-Chillax calculator, gives a "feels like" temp of about...north pole. In fact, there was a newspaper description on February 28th that mentioned "the fifth day of raw, windy weather at Chain O'Lakes Park." So they were in a cold snap down there, regardless of the actual recorded high temps. And in the Philly paper on March 8th, 1991, they mention Ken Howell having injured himself on a "cold, windy day" in Clearwater earlier that week. I went back a few days to find out that the day of the injury was...boom, March 4th. And Clearwater is only 60 miles west of Winter Haven.

So March 4th was for all intents and/or purposes, cold and raw and windy. Hence the long sleeves.

Granted, they could have worn the home whites for a game, too. There could have been this March 4th day with just some uniform try-ons, and then a separate "photo day" later in the month on which they played a game. In fact, if you look at one of Clemens's '92 Stadium Club cards, you'll see he's got a home white jersey, and then if you look at him on the cover of the yearbook, you'll see he's also got a home white, but with a different undershirt. This points to multiple days wearing the home whites. A way to check would be to go through the newspapers for all of March and check the game pics and see if there was a game with home whites. I checked a few, and it was all blue jerseys. (It would be easier if the damn Boston Globe would make its archive free.)

Also, check out Quintana's Fleer card from that same year: 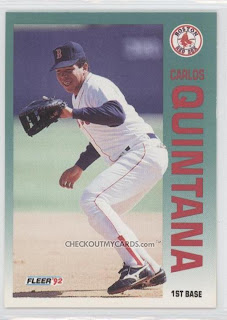 Note the jersey, undershirt, hat, hair, glove...all the same as the card in question. And it's also obviously spring training as that's not Fenway. (If you look at the back of Quintana's '92 Donruss, you see him looking similar to these photos, but he shadows are different, and you see a white undershirt. More possible proof they wore the home whites on multiple says in spring training 1991.) I also think this is a workout as opposed to a game. Putting it all together, I gotta go with March 4th as the day both of the pictured cards were shot on. The winds died down and the temps were more Florida-like for most of the month after this early cold snap, which also points to both of these as early March shots.

My final answer is March 4th, 1991, Winter Haven, Florida. If you can prove otherwise, I'll be happy to hear your theory.

P.S. Note to younger/less historically informed people who are saying, "What the hell is a Chain O'Lakes and who the hell is Winter Haven???": This is where the Sox played in spring training before Ft. Myers, ending in 1992. The Indians played at the park until '08, but now a shopping center is poised to destroy it, presumably as soon as an amateur baseball tournament ends this coming March.

Comments:
What can I say? Well done! And, a little scary.