So I've been going through my hundreds of ticket stubs and putting them in order. I found an unused photo album with a lot of pages so I've been stuffing that thing with 'em. The earliest ticket that I have, or that I've found anyway, is this one, from Shea Stadium, 1983:

The $550 price is for the season, though that would always confuse the hell out of me as a kid. My dad's friend had these sweet box seats, and in first/second/third grade ('81-'83) he and I would go to games, sometimes on school nights with me sleeping on the ride home. I know we saw at least the Reds, Cubs, and Cards in those years. Shea was only an hour away (and a friendlier place to take a little kid than Yankee Stadium--though I was going to games there as early as 1980), and we rooted for the Mets in the NL because they were the Yanks' in-city rival. Oh, and they stunk. Those games were always empty. The stub above is from the game where Cards pitcher Dave LaPoint hit a line drive right at us. The ball slammed off my dad's palm and rolled away.

The second-oldest one I found was this Fenway ticket from a Sox-Yanks game on my 9th birthday: 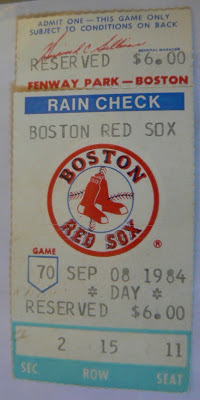 I'd been to Fenway before this, starting in '82, but this is the oldest Fenway ticket I've got. Unless something else turns up.

And here's my third-oldest stub: 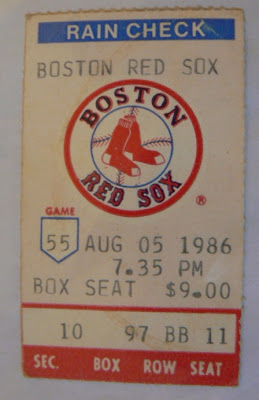 Oil Can Boyd pitched in this game against the White Sox. Looks like we were out by Canvas Alley. That $9 seat'll cost ya $52 today.

I only have a few more tickets from pre-'90, but around then I started saving every single one. I'm thinking what I might do is make a blog where I show a stub from whatever day it is currently, from a previous year. And talk about it. Between games, movies, and concerts, I wonder if I've seen an event (that I saved a ticket from) on every single day on the calendar.

"Mom here. I wonder what year they started scanning tickets and let you keep the whole ticket rather than the stub. Also, I can't wait till you get to show a certain no-hitter ticket."

I'll never forget my first scanned ticket: Pat and I went out to Pittsburgh for Sox-Pirates in 2003, and we were shocked to suddenly be in the future. Fenway started soon after. I think. And yes I still have the UNused no-hitter ticket, and a used stub.