Sunday afternoon I found myself in Chan's empty apartment in NYC, having done a 6 a.m. airport drop-off at JFK and then sleeping from 7 a.m. to 1 p.m. I didn't have much time in New York, so I figured I'd do something I've been wanting to do for a while: Go to the Polo Grounds, home of the New York Baseball Giants.

Of course, like the Giants, the Polo Grounds isn't there anymore, but I've always been intrigued by the John T. Brush staircase--the only remnant of the park that remains. So I drove way up to 157th Street in Upper Manhattan on a fairly beauteous fall afternoon. 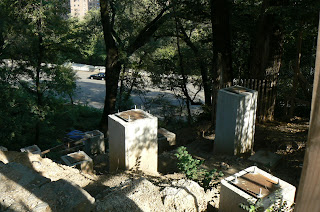 And the stairs were gone! Sorry folks, Wally World's closed! 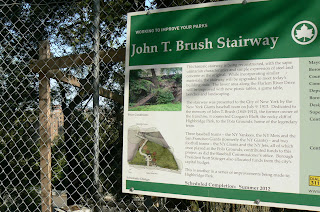 As you can see by the sign, the stairs are finally being renovated. To be completed...this past summer. Guess they're a little behind. If you don't know about the way the Polo Grounds was situated and how the staircase factored in, well, you're already online, presumably, so do yourself a favor and do some research. If I start writing about it, I'll never stop. (But I'll tell you that the spot I was in is on the top of the bluff toward the left side of this pic.) 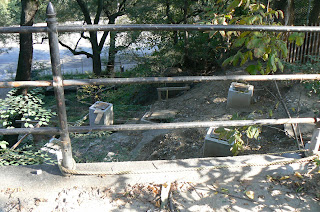 This is looking down the hill. These things are part of the renovated staircase, I'm assuming. Though they've done a good job of making it appear as if the whole project has been forgotten. 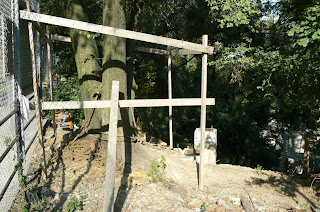 The also have 2 x 4s up around a bunch of trees. And lots of rope. 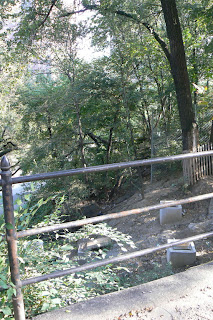 This is the shot where you might see Yankee Stadium (where ALCS Game 2 was getting ready to start at that moment) across the Harlem River had the leaves not been on the trees, or had I gone down Coogan's Bluff a little more to the south where it's accessible. The entire stairway area is fenced off. All these shots are through the chain-link fence. It would have been cool to see the old staircase with the marker on the landing, but hey, I got to see it at the exact point in time when it was off at the Grinch's factory getting fixed up. And I was able to give you (and the Wikipedia page) an update on this renovation project. And spend some time in Washington Heights--it's cool to see how the geography differs in different parts of Manhattan. I also went a few blocks over to where Hilltop Park, the first home of the Yankees, was. Just a hospital there now. But you really get a sense of why they would have named it that. 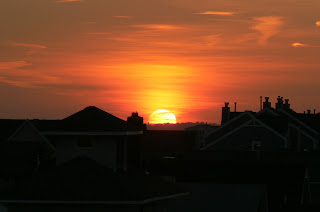 Then I drove on to CT, listening to the sun set (hopefully) on the Yanks' season in the car, before stopping to watch the second half of the game and getting this picture of the sunset.

Side note: Speaking of the Giants, I'd like to say that I'm happy for Marco Scutaro for getting to be in the playoffs. One thing people forget about the tragic events of September '11 is that Scutaro was one of the few guys who performed well while the Red Sox were collapsing. He was then shown the door. So good job, Marco.

(Yes, of course I put the Scutaro thing in there just so for the purpose of naming this post. I'm sure you all figured that out. Not that I don't believe what I said about him....)

Comments:
Thanks for the update about the Brush Stairway. My dad, now a Red Sox fan, rooted for the NY Giants in his youth and I'd been curious about seeing the last remnant of the Polo Grounds.

No problem. I can't wait to see what they do with the staircase and that hill....