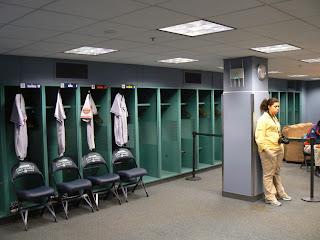 We came in through the Absolut Clubhouse and went down into the visitors' clubhouse, which as you'll see later isn't as nice as the refurbished home one. 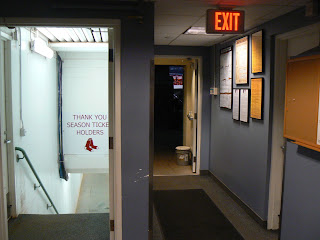 From here you can see the seats above and the tunnel to the dugout below. After taking a few pics we headed down the tunnel. 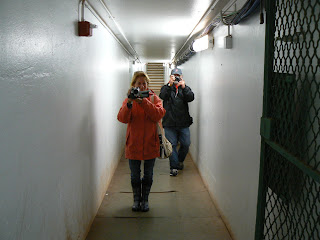 Looking back at my camera crew/cheering section. A few seconds later we were on the field and I was taking batting practice, which is its own blog post: click here if you missed it. 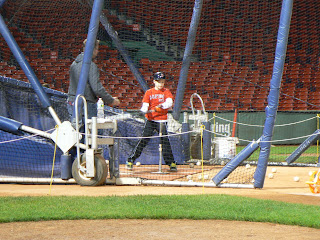 After hitting we then were sent over to the home side of the field, where we hung out in and around the dugout for a while, watching people swing and miss. They were nice enough to bring out a tee for kids who couldn't hit the over-their-head pitches.


Here's a video of the field and somebody whiffing five times. 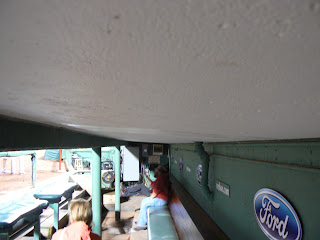 Nobody ever takes a picture of the ceiling of the dugout.... 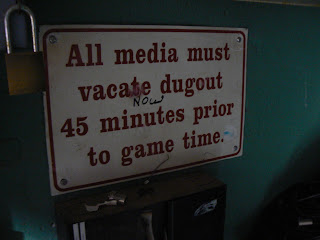 I swear I did not write that little "now" in there. But I agree. Get the fuck out right now, media! 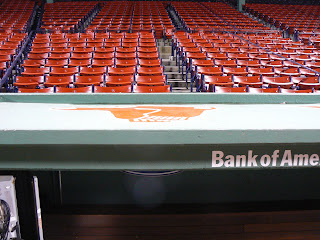 A view you don't usually get as a fan. 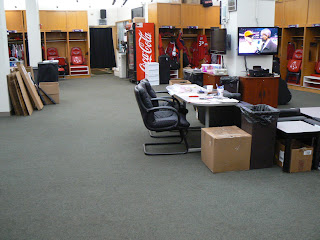 We finally took the tunnel to the Red Sox clubhouse, somewhere I'd never been in my life, not even at the open house in April. 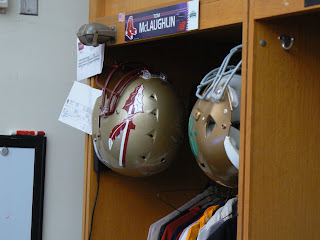 I don't know what's weirder to have at your locker: football helmets or a pencil sharpener. 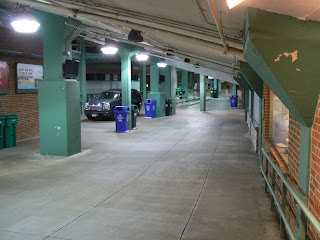 From there we came back out toward the field through the seats--here's a shot from under the seats looking toward home... 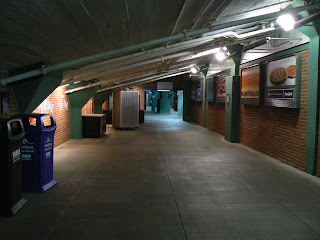 ...and toward right field. 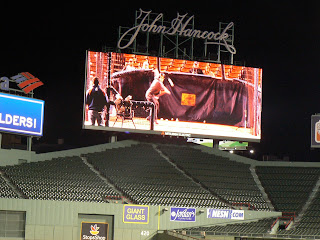 We noticed that the first rows were visible behind the batter on the center field scoreboard. So we went right down there and got ourselves on. This shot goes huge when you click it--that's me at left taking this picture, and my mom and Charlie at right.

Here's a video of me waving at myself from behind the cage. (I can't figure out why I hear a crack of a bat while the guy's not hitting. The video can't be ahead of real life!)

Here I am right behind the hitter making faces--unlike the other one, you can really tell it's a live shot. 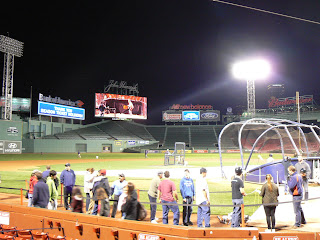 View from farther back.


Video of the action from the back of the grandstand behind the plate. 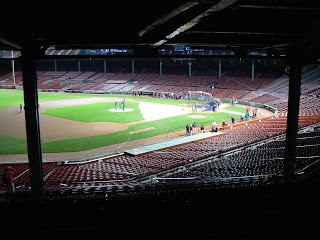 A shot from out behind third base. 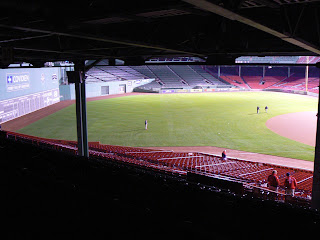 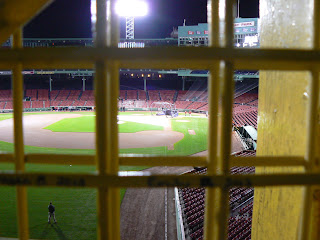 I went up on the Monster for a bit, got this shot through the Fisk Pole.


Vid of BP from the Monster Seats. It's so empty because this went for three days, with only so many people allowed per time slot. This was basically the final hour of the entire event. 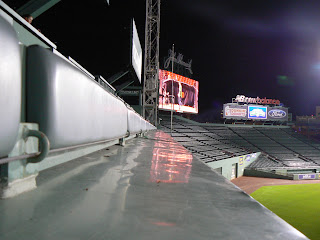 Yeah, this shot again. But with fewer people and less light than usual. 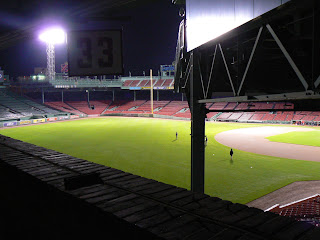 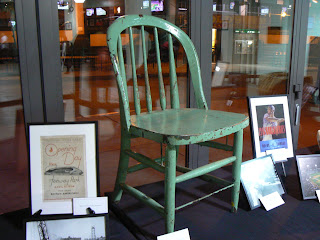 We finally made it to the Gate E area, where they had some cool stuff to look at, like this old Fenway box seat. 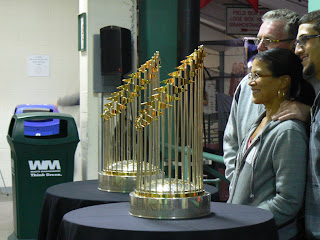 And, of course, the trophies (with strangers behind them). It was a rad experience as I'm sure you've gathered. They had said rain was coming, and I feared having to hit indoors, which was their backup plan, but it held off. And it was probably in the 50s, not bad at all. So that was it. We got Mexican food and listened to Yanks-O's on WBAL 1090 AM, which was coming in better than WCBS, on the ride back. The end.

Did you find the bullpen phone? I couldn't.

Oh right, you said something about that before. I still don't know what you mean because both the "house phone" and "bullpen phone" were there, but they were both taped shut. So you're saying one wasn't actually in its case?

Great stuff, Jere. I really envy you, and gave you a shout out on my blog last night.

Are they doing this again this year?

Have not heard anything yet!

And boom goes the dynamite--just got the e-mail, they're doing it, tomorrow through Wednesday.

Awesome! I just stared with season tickets this year and I didn't get the email..how do I go about getting there for this.

Try calling the ticket office if you still haven't gotten the e-mail by now.