"Did He Just Call Himself The Talent?" 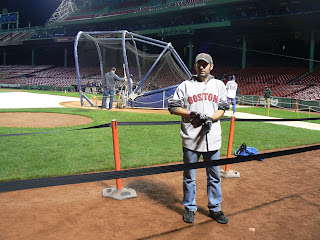 Here I am on the field at Fenway, putting on my batting gloves, ready to take my five swings. Can you believe I just wrote that sentence and it was true? This was an event for any season ticket holder who wanted to do it. (My plan only includes 10/81sts of the season but it still counts in this the awesomest of cases.) 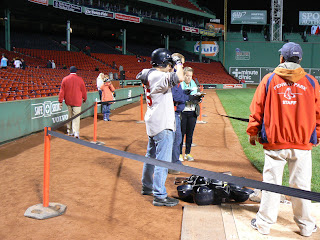 Even though they made you sign a liability waiver, I asked if the helmet was mandatory. The question was met with an emphatic "yes." Damn. 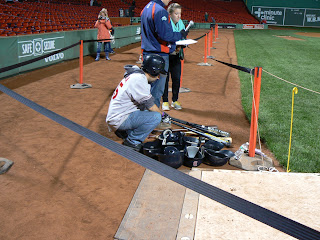 Some of you will be mad, but I knew I was gonna choose metal over wood. I've been using strictly metal all my life. I didn't want to go the major league route for fear that I couldn't get the thing around. I've only got five swings here, might as give myself the best chance of hitting the ball. If they had a fungo bat I probably would have used that! 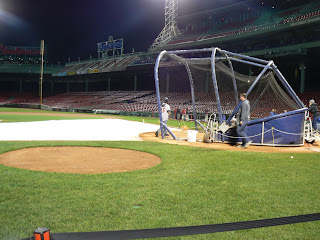 Here I am entering the cage. I only had to wait behind one guy (named Morrissey!). The woman asked me my name, nickname, position, and number. I only went with 15 since I had a Pedroia jersey on. For nickname, I went the "none" route. And I fancied myself a shortstop. I also tried to go around the back of the cage as a lefty would do--but they looked at me like I was crazy and directed me in through the near side. 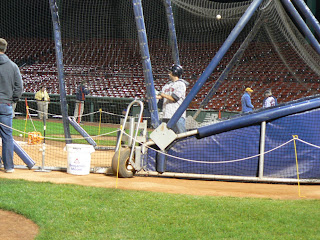 As I took my practice cut and prepared for the first pitch (it was from a machine), I was totally locked in. I don't remember hearing my name announced (not over the full PA but over some sort of speaker), and I never looked up at myself on the big screen. I was focused as a mofo. 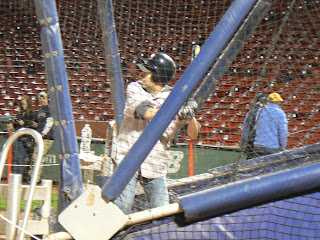 And I cracked the first pitch high and deep to right center. Not major league deep, but me deep. Well into the outfield, over the second baseman's head. Only then did I kind of grasp the big green expanse of the outfield out in front of me. The clink (yeah, yeah) of bat echoed through the park, and me and the cage assistant (?) just stood and stared at my big hit. (The video doesn't show the ball--or the contact--but you can see the admiring.) I had been worried about the pitches being too high, which happens a lot with pitching machines, and the first one was high, but not too far above the waist. I would have loved to have had them all in my wheelhouse, thigh-high and inside, but I knew I'd have to make due with lousy high balls. But I wasn't about to take any pitches. So my next four were two that would have been fly balls but they hit the front edge of the cage above me, one swing and miss on a too-high pitch, and another solid arcing line drive to center. 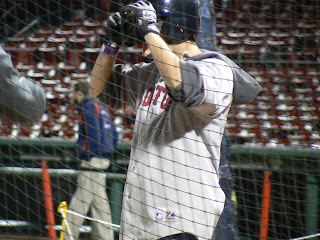 After my five, the guy asked if that had been my fifth. I wasn't about to say yes and end my time, so I smiled and shrugged and he let me take one more. Unfortunately it was another face-high pitch. I had no chance. But I was happy from the moment I made solid contact with that first ball. Seeing baseballs (off of my bat!) flying off into the night at Fenway Park was like a dream, but one I know was actually real. It was also slightly different from the normal night-game look, as only the infield lights were on. Above, the helmet comes off after the sixth swing. 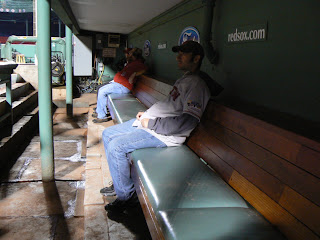 The whole thing happened so fast. Way faster than it took you to read the description of it. I emerged from the visiting dugout, suddenly I was in the cage, and just as suddenly I was in the home dugout. Thing about normal batting practice is, you get lots more pitches, and you can always ask the person to adjust the location of the pitches, and you always know you'll be allowed to get that one last good hit. This was not that. It was get in, swing no matter what, and be kicked out with no objections allowed. I was lucky to get that sixth swing. I feel like I was just getting in a groove and within ten more pitches would have been sending them down the line toward the pole. I was gonna make a sex analogy, like, Imagine you're just getting going and then everything stops and it's all over, but then I figured every single female reading this would cup their hands around their mouths and shout "NOW YOU KNOW HOW WE FEEL." 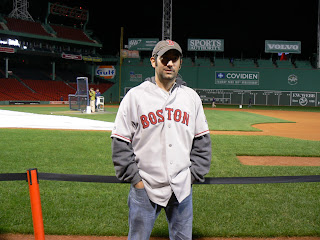 So yeah, it was a good night. Before and after all this I got to see both clubhouses, walk around the park, and see the trophies with my camera crew/cheering section: my mom and Charlie. 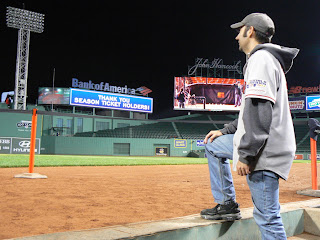 You're welcome, Red Sox. And thank YOU.

As for the video, below is the whole thing, as captured by my mom. (Charlie took all the still shots above.) Video is tough. Remember, any baseball game you watch, in order to see the pitch, the swing, and where the ball goes, it takes two cameras. The best you could do with only one video cam would be to stand behind home plate--but, you can't see through the backing of the cage. (Even if you could, you'd never see the batter's face.) If you went way up in the stands back there, you wouldn't be able to tell it was me anyway. So my mom shot from the side, attempting to get both me swinging and the flight of the ball, which proved almost impossible AND would mean missing the next swing. In other words, she did a fine job considering the limitations. So I took what she shot (4:3), put it on the TV (16:9), and shot that with my other cam, adding slo-mo and zooms. For example, I slowed it down so you could see us staring at the first ball I hit, and so you could see the other ball I hit into the outfield which my mom miraculously was able to shoot as it flew through the air. And the crappy height of that last pitch, my excuse for missing it completely. Enjoy.

Thanks to mom and Charlie for documenting this. I will show the other pics and vids from the night in a separate post. And I should point out that only one person per account got to actually get in the cage. So, unfortunately, you couldn't have come with me and hit too. Also, O's win! We got to see the last inning when we got back to Providence before they headed back to CT. 1-1 going to New York. Balty can do this....

Comments:
Fuckin A, that is beyond cool.

Yeah. I wonder how often regular people have hit on the field. I don't think they've ever done it on a grand scale like this over multiple days, but I gotta figure between corporate types and the Jimmy Fund and stuff, it's been done before. But probably not too much. Then again, any special perks the season ticket holders get that I DON'T qualify for--how would I even know about them? Maybe a full-season ticket holder could give us a comprehensive list of perks they've gotten since the 60s or whatever....

What Kara said! That is SO cool!!