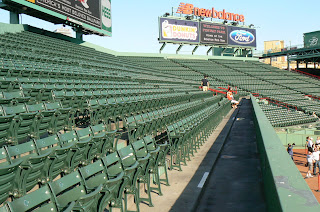 Lately I've been timing it so I don't have to wait on line for the early entry. I walk up just after the line has gone in, then I walk in, no waiting, and I'm only a few minutes behind. So after getting Anna's Taqueria and parking (they just turned some of my GREAT spots right near the park into resident spots, booooo) for a few quarters, I got inside Fenway around 4:45. And everyone had gone to the Monster, except for these two girls. I had from the camera well all the way to the far end of section 36 to myself. Unfortunately the Red Sox didn't hit any balls to the bleachers. But the Yanks would. More on that soon. 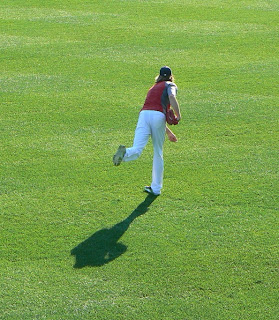 For the time being I could only take pics of Andrew Miller in the late-day sun. 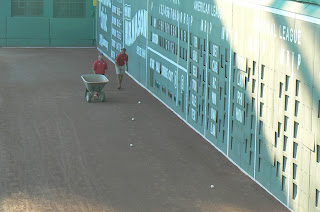 When the Sox finished hitting, the Yanks were still stretching, but their fungo guy decided to hit a bunch of balls out to The Wall for no reason, leaving these guys to eventually go retrieve them. 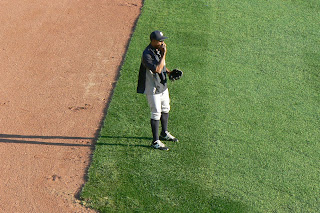 Granderson appears to be taking a puff of cheeba, as the Yanks are now finally throwing on the field. They started hitting, and a ball went to Ichiro right below me. I yelled down, "Ichiro!" He still was holding it so I gave it one more shot: "Ichiro, up top!" And he turned and lobbed it up! 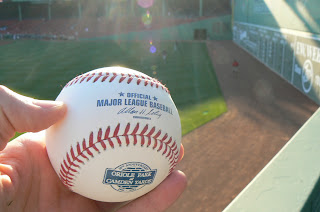 I made the clean catch. Another Camden Yards ball! I wonder if Ichiro knew he threw a ball to a guy who recently called for his suicide online. By the way, I didn't mean for this pic to be so beautiful, I was just trying to get Ichiro in the background (you can see him all blurry-like just above the ball).

At this point it was still just me and a teenager with his aunt, and they were staying over by 36 while I manned the 34-35 corridor, still with a massive area to myself. Andruw Jones then bombed one toward the camera well. I ran over, easily getting it as it rolled down the stairs between 34 and the well. 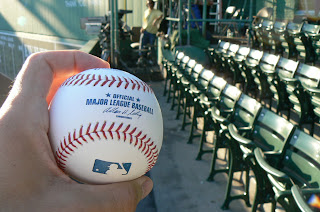 Here's ball #2, with the spot I grabbed it in in the background. This was a clean white ball, but, thankfully, no "practice" stamp. I love getting balls with different things on them, but seeing "practice" makes it feel like a lesser ball.

At this point there's another homer to around the same spot, but some guy who may have been a photographer or something got it. He was just sitting there. I could have been way more aggressive and beat him to it, but at that point people knew I was starting to build up a cache, and so I figured I'd advocate for the woman with the nephew. So just as the guy scoops it up, I say "this woman's got a kid who hasn't gotten any...." But then a ball is rocketed toward section 36! So I go flying over there, across all of 34 and 35 and a few seats into 36 and grab the ball just before some older guy. 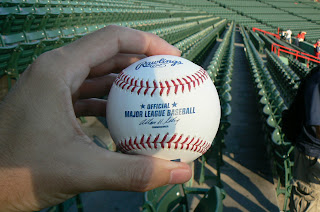 Giving me this, ball #3. Another stainless new-looking ball. The only discernible difference from ball 2 to 3 in these pics is a little mark on the top right edge of the MLB logo in ball 3. The spot I got the ball is about where my top finger is. As you can see this one went several rows deep. I wanna say it was Jones again but I'm not sure. I got back to my old spot and saw the woman, who informed me that the guy had given her that other ball, and she thanked me. 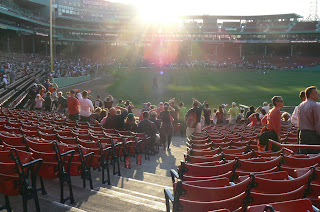 There were two other near-misses, but believe me, I was fine with a three-ball day. Still, I went to RF for when Ichiro hit, as he's known to pepper that side. All I got though was this pic of everybody shielding their eyes, and more bruises as I lumbered around with three baseballs in my shorts pockets. (I'm up to 25 lifetime balls now. I have been recording them with updates to this post, which I originally wrote when I only had 6 balls, back in 2008. I ended up adding 9 balls in '09 before being shut out in '10, then 2 in '11, and 8 so far in '12. I need one more this year to tie my all-time mark for a single year.) 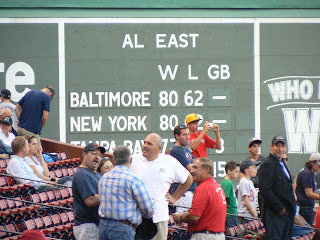 Got this shot of the Orioles in first place. By this time they had won in 14 innings, so a Sox win would have put the Yanks in second. 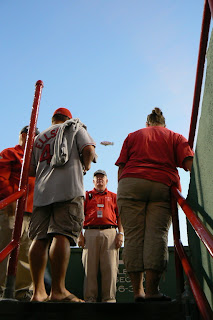 Back to the bleachers, here's the blimp from inside the stairway tunnel. 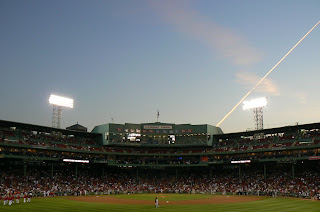 My seat was in the front row of section 35. This sweet spot costs you $28. A concert can cost $100 or more, yet all these parent types keep saying "I can't take my family to Fenway." Fine. I'll take the seats. 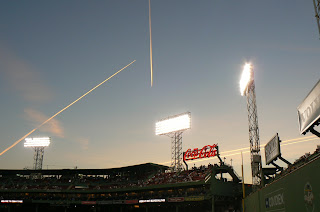 I couldn't believe the plane trails. They were so...French Vanilla. Don't overlook that double-trail that runs through the Coke sign. 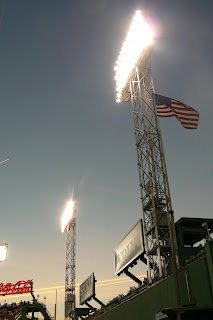 More trails and the flag. 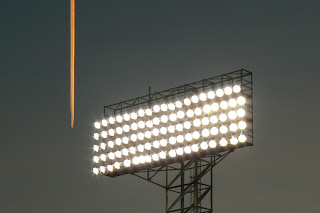 A sweet vertical one right next to the light tower. 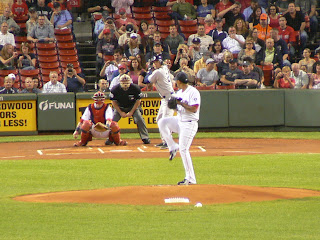 My view on the first batter of the game. 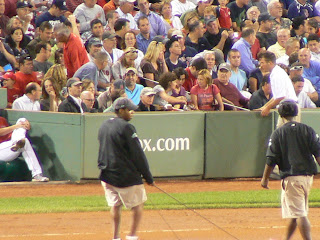 My mom called to tell me Larry David was at the game. I spotted him with my zoom. I didn't know till after the game that Jon Hamm was with him, so the shots I got him in are accidental, but you can see him on the left in his Cardinals hat a little to the left of Larry in the front row. 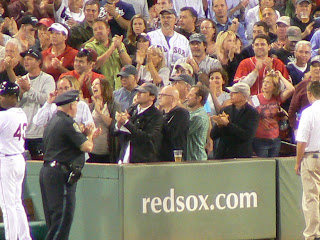 While everybody stood and clapped for the military guy, I sat and got a better pic of Larry David. 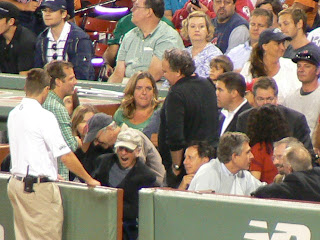 Mid-game I moved to the third base side, and continued getting shots of Larry. Here he is mid-yawn, along with Tom Werner. 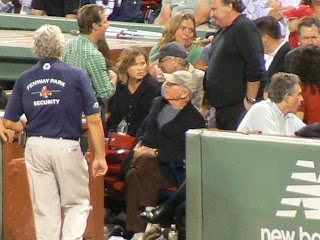 The security guy kept opening the door, giving me the perfect full-body view of Larry! 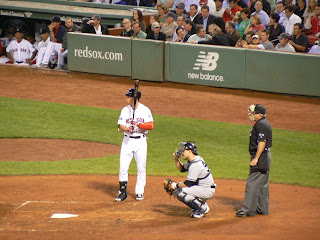 Ellsbury up, as Jon, Larry, Tom, and the dugout look on. 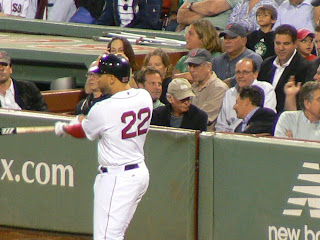 Here's proof I didn't know Hamm was there, as he's half-cut off in this pic of Loney with Larry. Unless you think I cropped it on purpose. But I'm not a psycho. 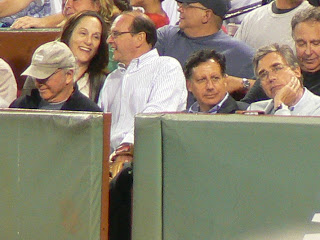 David cracks a smile next to Werner. 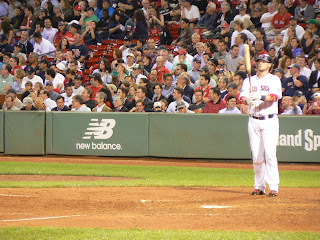 Salty comes up as the tying run with two outs in the 9th, but he grounds out. The final was 2-0. The Yanks scored on a sac fly and a classic Je-turd. So the O's and Yanks remain tied for first. 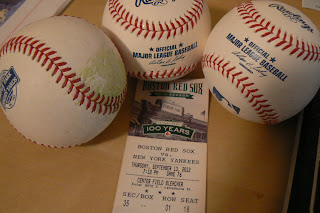 My 3 balls and ticket. Note the Camden one has a rad grass stain.

And the PawSox are champs! First time they've wont the International League since '84. They completed a sweep of the Knights tonight, and now go on to play a one-game fake "championship" against the Pacific Coast League's champ to determine which team cares less about an exhibition game. Okay, I vote for a parade through the streets of Providence!

Good thing you were at the game and not listening to Orsillo or you would have blown a gasket. He referred to the O's and the Yankees as tied for first. Then many innings later he must have glanced at the scoreboard because he said (get ready): The O's are temporarily in first by a half game.
I am not kidding!