Out For A Morning Spin 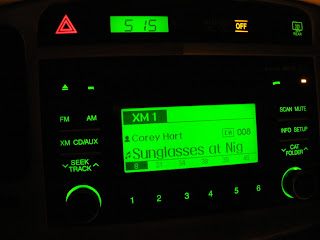 Set the alarm for 4:44 Monday morning. By 5:15, as you can see from this picture of my car's radio, it was still nowhere near light out. 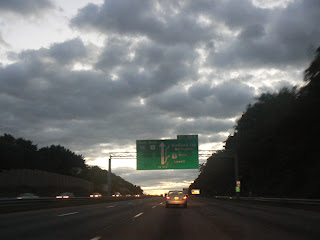 I was headed for Lowell, Mass., where legendary baseball snagger Zack Hample would be attempting to set a world record: Baseball caught from the highest point, in this case, a helicopter hovering a thousand feet over the home of the Spinners, LeLacheur Park. He had tried this once before--click here for that story from his blog--and was kind enough to invite me to attend yesterday. 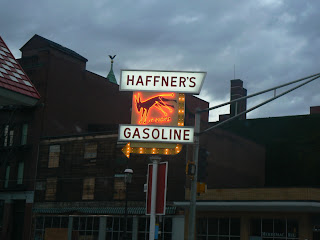 I got to the ballpark before anybody else, around 6:30 a.m. for the 7:00 stunt. Immediately I was in "pre-updated Red Sox logo" hell. Here's a poem for the uninitiated: "BOSTON in blue, logo ain't new/BOSTON in red, old logo dead!" The big club needs to head out to Lowell and update those. It's been almost four years now. Love that Mystery Machine, though! 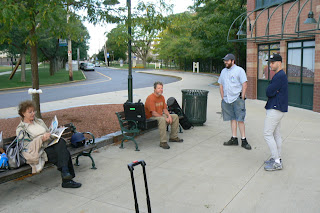 Then Mike, the mastermind behind the whole "getting a helicopter and calculating the logistics" aspect of this record-setting attempt, arrived and we got to hang out for a while before Zack and his entourage arrived. Above, Zack on the right, his mom on the left, and two guys whose names I never got in the middle. At this point there was talk of wind, the arch-enemy of helicopter ball drops.... 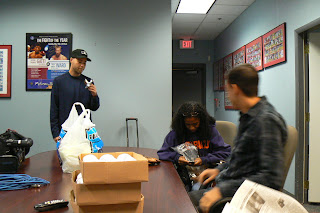 Here we are in the offices of the Lowell Spinners. I'll just get to the big reveal at this point: The attempt was called off. It was just too windy. When you drop something from 1,000 feet over a ballpark in a city with disabled people and babies and disabled babies walking around just outside its gates, you better be sure that object is going to hit the field. When the wind hits a certain speed, there's just no guarantee of that. Mike had to make the call. (I regret not having a photo of Mike--of course I would have taken plenty of him had the stunt taken place. But he can be seen in Zack's post linked above. Mike has done yeoman's work out of the kindness of his heart in these attempts.) 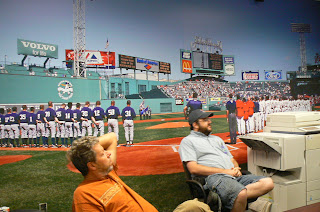 So a decision had to be made about when to re-do the stunt. But first, the more immediate decision to make use of a baseball stadium we had all to ourselves was made.... Above, a sweet wall-sized picture showing the Spinners at Fenway for one of the Futures at Fenway games. 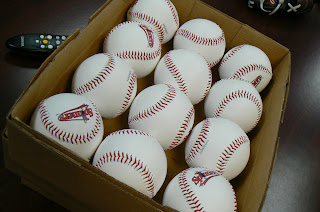 And some Spinners baseballs. 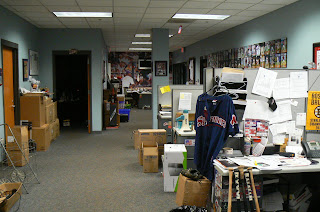 And some offices. It'd probably be pretty cool to work for a baseball team. 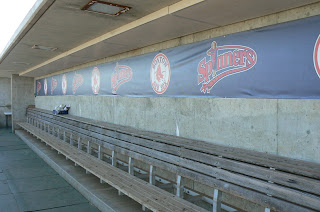 Not even the old logos could pry the smile off my face. Fortunately I had my glove in the car, and all of us had a catch on the field, being careful not to eff it all up. 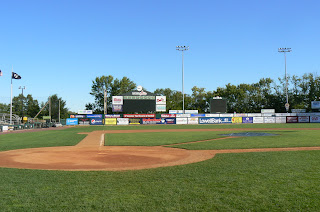 We even grabbed a bat and shagged balls for a few minutes. Of course, I was a little too busy to take pictures at that point, but hopefully some of Zack's pals/mom got some shots of us out there. 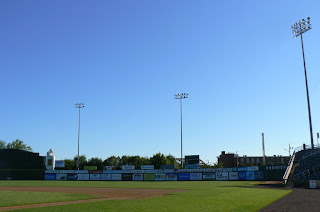 But these are some shots I got as we were about to head back underneath. At that point the decision was made to just hold off until next year to try it all over again. Initially Zack wanted to drive back to NY, go to the Mets game, then somehow make it all the way back up to Lowell to try again the next morning. But eventually, to the delight of his mom, the call was made to do it in 2013. But hey, I got to play ball on a real field, so getting up at 4:44 was totally worth it. Thanks to Zack, Mike, the Spinners (fix those logos!), and the whole crew (which included other names you probably know from Zack's blog: Ben Weil (the man with the million jerseys), Zack's girlfriend Robin, Zack's mom Naomi, and his friends Andrew and Dorkys. Was awesome hanging out with those guys. And it actually felt surreal at one point, sitting among all these people who you've already seen pics of in the same stadium but never met in person--it was like being IN Zack's blog!) 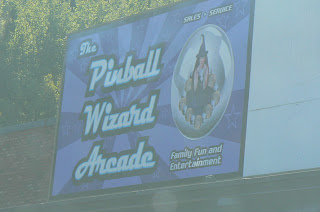 Since I was in Lowell for the first time in my life, I had to head up the road to Pelham, NH, to check out the Pinball Wizard arcade, which is fairly new. It was pretty amazing, rivaling the Pinball Hall of Fame in Vegas. Countless (unless you count them) old-school video games and pinball machines. I played Smash TV for probably the first time since 1995, and got 187,010 at a weirder version of Ms. Pac-Man. If you grew up playing all those old games, check this place out. I've never been to FunSpot, so I can't compare, but this place is much closer to Boston/points south.

Comments:
Bonus note: When I first got in the car, it was 5:12, and I just looked for the coolest song to take a picture of. That song was "Headbanger" by EPMD. But when Sunglasses at Night came on, I waited till I got to a red light and grabbed that instead. Too perfect.

you know, technically you do have that picture of me at the Tigers/sox game on may 30th 2012, but it's not a great photo. It was good to see you again, and i'm sorry we had to slip the drop until next year, but it will definetly allow us to do it safely.

That's right--of course at that point you were just a random ball snagger who I didn't know....