Yanks sweep series vs. Jays, go to a full game up on Balty. Red Sox led Rays by 3 going into the 9th; lost by 3. Now Baltimore comes to Fenway. Red Sox, you ruined last September by collapsing horribly. Please don't ruin this September by preventing a Yankee collapse. Let's rest some players (wink, wink) this weekend! In the 5th, your ass goes down. Say it! Now on to the pics from Thursday's PawSox ceremony.... 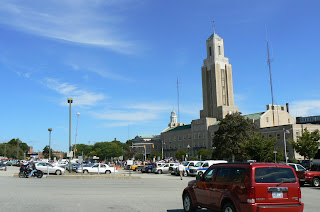 A crowd of dozens gathers at Pawtucket City Hall. The Paws are beloved in the community, it's a shame they had to do this on a weekday afternoon. But nice job by the fans who did show up, and the players who chose to stick around to be a part of this. 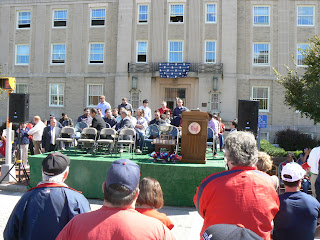 The players waiting for the event to start. 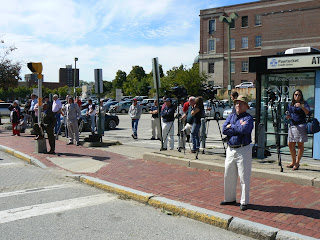 There were a bunch of news stations covering this. From what I've seen, though, most just gave this story a few paragraphs and one or two photos. I win. 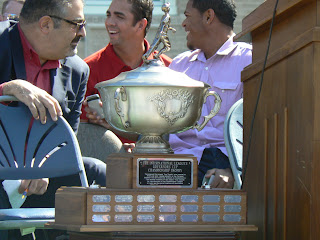 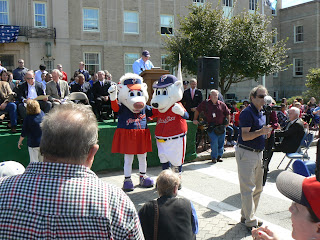 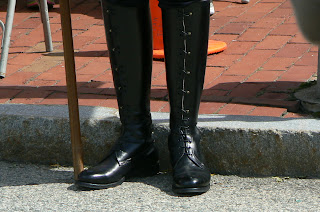 The cops brought out the jackboots for this. There was a guy on one side of the stage holding the American flag, and a guy on the other with the Rhode Island flag, acting like those guys in England or whatever who aren't allowed to crack a smile. This was their footwear. 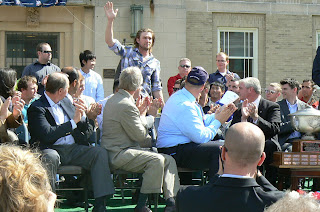 So basically the announcers spoke about the team, introduced the governor and the mayor, you know, stuff like that. Then they intro'd the players. I figured I'd get a shot of each one as they stood up and waved. Of course, looking at the pics now and going to the roster, I can't figure out half of them. I should have been paying better attention all year to PawSox Heavy and Sitting Still! Anyway, here are some of the ones I know. Above, Josh Fields. 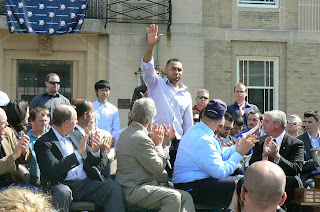 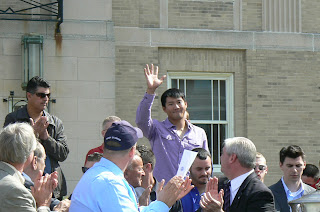 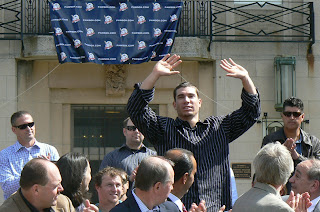 Nate Spears was the most charismatic guy, taking full advantage of his waving opportunity. 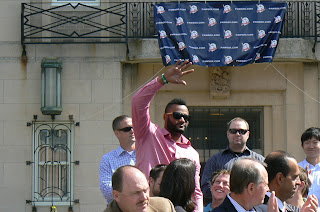 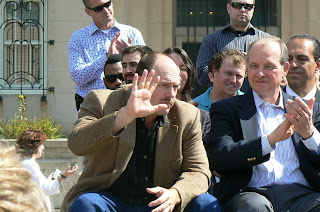 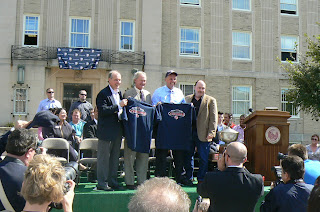 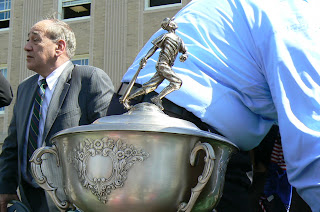 So the ceremony ended and I went up close to the trophy to get a shot of it. The players all started leaving the stage area, but suddenly.... 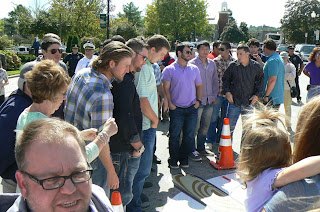 They gathered to look at this street art which had been unveiled during the ceremony. 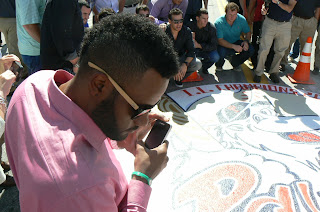 Tony Thomas taking a shot of the art. 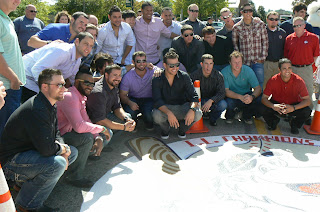 Then they all started posing for a team picture around the thing. Which was pretty cool because I happened to be right there, so suddenly it was as if I was one of the cameras they were posing for. I'd love if one of you Paw-ficianados could comment with the names of everybody here. 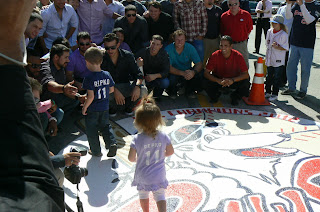 Repko's kids hustle to get into one of the shots. 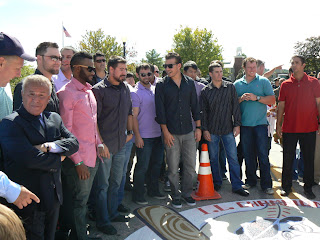 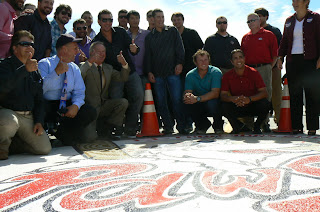 Tried for a low shot, especially to get the painting in without it being washed out. 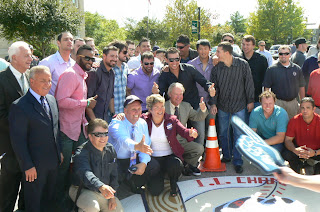 Governor/mayor in with the team. They said the Paws used 69 players this year. 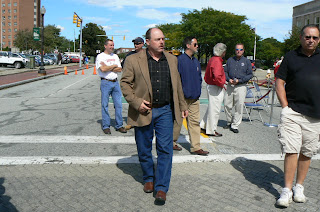 Arnie in the street. 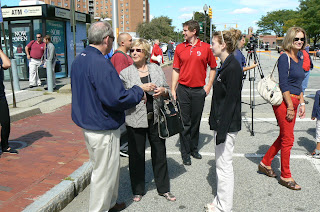 One for the road (Rodriguez and Bermudez, I believe).... 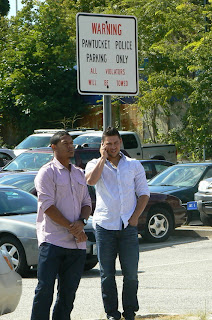 Comments:
Really nice pix, Jere. Jackbooted RI cops!?! Was Charlie Baileygates there?
I have to say hooray for Arnie Beyeler, my fellow WSU alum. I hope to see him in the bigs soon.

Nice! Thanks for sharing, Jere!

I'll take a stab at your group shot...

Top row: Some of Huntzinger, Hassan, Hernandez, Fields, Bermudez, Jeff Cutler (maybe?), Rodriguez, Dent, Rivera? (leaning over in sunglasses), not sure who's next, Hazelbaker, Hee.

Not sure about the rest of the folks standing around, including the guy behind maybe-Rivera. Could be employees, but there are usually a couple of guys like Mike MacDonald added late in the season whom I've never knowingly seen in person.

Thanks for the shots! I wish I could have made it down.

Cool, you nailed it. It looks like Beyeler's bald head is visible too, to the right of the woman.