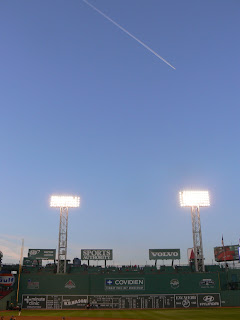 My plan for the game tonight: BP early entry, see ceremony for 2004 team, and then do something I've always wanted to do, go out to Lansdowne and try to get a home run ball. Since I knew I was going to a game the next night, and since it really doesn't matter if the Red Sox win or lose at this point, I figured the ceremony alone was worth the price of admission, so why not use this night to do something I've been meaning to do? As for BP, there were only about 6 other people in CF for a good while. All in front. Any ball that cleared row 1 in section 34, 35, or 36 was mine. A few balls made it, but they all bounced right back onto the field. I was shut out. Then I went to the dugout area for the ceremony. There wasn't a cloud in the proverbial sky, and it was only slightly chilly. No complaints for late September. (Though I still say September is rarely as dreadful as April. April is still two or more months from summer, whereas most of September IS summer, and even if the temp is low, the park's been pre-heating for months. But enough about weather.) 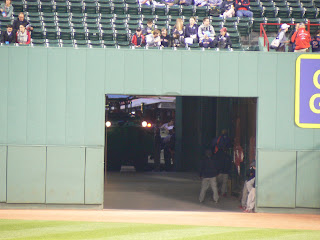 I didn't know how the ceremony would be set up, but I spotted a duck in center. They all came out in three ducks. Coaches in the first and players in the next two.

Above, the Tito boat as it passes me. The moment the cam goes all screwy is when I'm reaching to snag a soft ball with my left non-recording hand. Clean catch and I was able to keep right on filming. You can see where I tried to show the ball. After reviewing the tape, I thought the toss came from Lynn Jones at first. But upon further review, it's clearly Papa Jack's throw that goes to me. Then you see the Embree/Tek/McCarty/Nixon/Foulke boat go by. 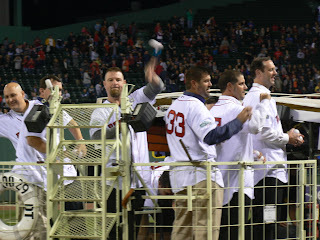 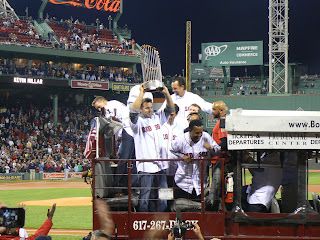 Above, the duck carrying Pedro and friends rolls by with the trophy. For some reason Pedro was intent on humping the trophy all night. You can see where Papi joins them. 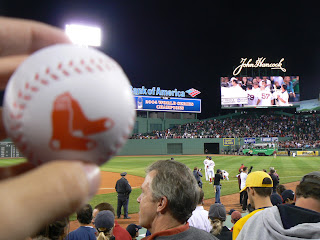 The ball I caught. I also got another one that landed in the seat in front of me, and gave it to the woman to my right who was second in line for the one I caught, and who I'd seen crawling on the ground trying to get another. I figured she wanted it most, and I wasn't about to keep two of the squishy balls. Similar to the final game at McCoy last year. 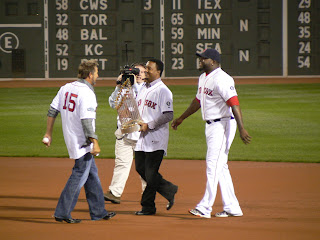 The ducks went all the way around, and then all the guys de-ducked and started walking in toward the mound. Here's Millar, Pedro, and Papi. 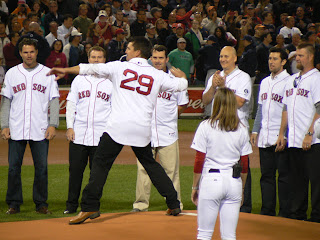 They had Foulke throw the first ball out to Tek. 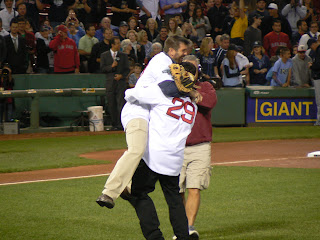 And what an awesome bonus it was when Tek reenacted his jump into Foulke's arms! 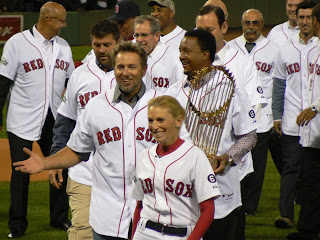 The team heading to the dugout with the trophy. Looks like about 17 guys showed up. In these pics you can also see Joe Nelson, Phil Seibel, Jason Shiell, Brad Mills, Ino Guerrero, and Dave Wallace. No Leskanic, no Reese, no Schilling. No Damon. Lowe, Arroyo, and Roberts were shown on the board doing pre-taped messages. Bronson brought out the old "apple sox" line. 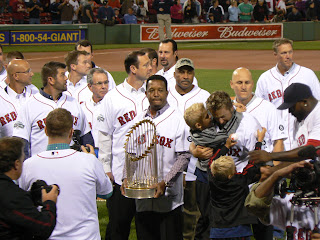 And everybody again. Note Millar's kids.

Before I headed out to Lansdowne I got right behind Wake and friends as they headed out the clubhouse door, under the stands, and out to the good seats next to the dugout. I filmed it but it came out really bad.

Then I left the park. I still wasn't sure I'd actually go through with it but I did. Turns out I was the only person out there for the purpose of getting balls. Nothing came over. Oh well. I gave it a shot, and I got to experience the during-game Lansdowne culture. The band "Down" was playing HOB so I saw a lot of their metal-tastic fans roll through. Kenmore/Lansdowne of course is the Disnified Times Square version of its old self, but it was still interesting to see the slightly seedier element of it all once the baseball fans were safely inside the park. I watched the T-shirt guys pack up their tables and load the van. I watched the parking lot attendant motion to Sausage King (who keeps selling all night) how I was clearly there to trespass in his lot should a ball go in there. I watched two college guys get sausages and eat them on the curb waiting for balls for about two innings before giving up. I didn't think I'd make it too long. I thought standing there (under the Monster Seats facing out so you don't have to crane your neck the whole time, plus any caroms come back toward you while you have a straight shot out toward the parking garage if it goes in there) for the length of a baseball game while not actually watching a baseball game would be agonizing. But the game went by really fast. I was able to see it on the TVs through the windows of the Cask, too. Of course, the ball will land before the TVs even show the swing, but at least I could kind of track the game. I could hear them announcing the batters over the PA, but barely. But, alas, I never saw a ball. I was just about to leave around the 8th when I saw my cousin Amy! She and hubby Howie had been at the same game, unbeknownst to me. So that was cool. You may remember Amy from when we took our dads out on the field at Fenway a few Fathers Days ago. She pointed out that the balls they gave us that day to play catch were the same as the one I got tonight!

After I got my post-game tradition cheddar cheese/pretzel Combos and Cherry Coke Zero (formerly Cherry Coke before I realized soda makes you gain all kinds of weight--but diet soda disgusts me, so this zero stuff will have to do), I got in the car and heard the O's lost. Shit. Flipped over to 880 (yes, both it and WBAL 1090 Baltimore came in just fine) and heard Sterling describing how the Twins could take the lead with a hit. And they did. They held on for a 5-4 win. Whew. So they stay just 1.5 up.

As for the plan of trying to get balls in BP and during the game on Lansdowne: I got neither, but I ended up getting a ball. And since it came from a member of the 2004 world champs, it's the best ball I could have gotten, despite its squishiness. Way more meaningful than a BJ Upton home run or some crap.

Comments:
Schilling? Mirabelli? Bellhorn? Ricky Gutierrez? DAUBACH? What are all these people doing in life that they couldn't come?

It was great to see you, Jere, and it was a beautiful night at Fenway! I loved the ceremonies-what a great night to be there! (Your pictures are way better than my iphone videos!)

I still can't believe I was just standing there and there you were walking by!

I was there too and I caught a ball by David Ortiz much the way you did. I extended my left hand straight out with a camera in my right taking pictures. Mine wasn't clean, I caught it and it bounced onto my red sox sweatshirt but it was funny reading how you caught yours the same way I caught mine.

We must have been sitting right near each other too. I was standing the first row of red seats (second section) right between home and third where the fence ended. My pictures look just like yours.

Schilling is a tool. Mirabelli isn't rich and Bellhorn doesn't like us. I LOVE Daubach but I bet he felt he wasn't really part of the team. I want to know where Orlando Cabrera is.

You mean home and first, right?

Mirabelli did come back earlier in the year for Wake Day.