Youk emerges from the dugout in his return to Fenway as a White Sock. More on this later....

A great win. All-around good feelings at Fenway. If you went, you left happy. Yet I get in the car on the way home, and the first thing I hear is a caller saying "I was at the game tonight. This team is unlikeable, let me tell you why." (His reason was that the White Sox stood along the dugout for the national anthem, while the Red Sox "played grab-ass" and "just don't get it.") If that's what you took from this electric night at Fenway, you should go kill yourself because you're already fucking dead. At least in this case even the host couldn't believe someone would say this, but remember, the screener could have hung up on the guy--but at WEEI they're under orders to put that call on first! If they're not paying the person to say it in the first place. (Nice touch using not only the "unlikeable" buzzword, but the "they don't come out for the anthem" bullshit that that pantload PeteAbe came up with last September to stir shit.) Anyway, I immediately turned off that station and listened to music the whole way home. I had not turned on Boston sports radio since last weekend's big protest--I always figure I'll put in on only on my way to and from games, but those three minutes I heard tonight might make me reconsider even that. Moving on! 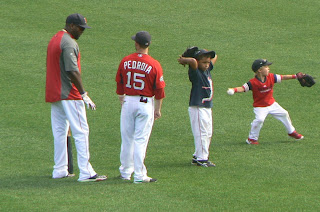 Hot day in Boston. Still, I got there early so I parked far away for free and took a walk, getting an unexpected drizzle to barely cool me off. Above, Papi and three little scrappy guys. 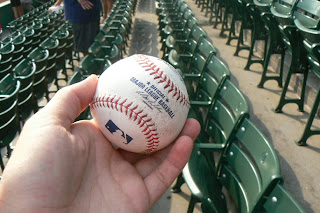 I did the RSN early entry, and got THIS in center field! Somebody hit a rocket that doinked off an older man's head, and right to a teen ballhawk. He tried to give the ball to the guy, but he didn't seem to want it, and quickly followed the suggestion of everyone around him to go get his head checked out. I could hear it konk off his coconut. During the commotion, there's another blast--now me and the teen ballhawk go for it as it lands in section 35. I went for the ball with extreme confidence, and I think that made the difference, as I reached over a row (slamming my knee on a seat) and snatched it just before he could add to his collection of probably hundreds of balls. Crawford was hitting as I took the picture, but I can't be sure if it was him who hit the ball I got. I would have gotten 4 other balls, but some guy and his two stupid kids had already monopolized my classic spot between 34 and 35, forcing me over to the 35/36 aisle. 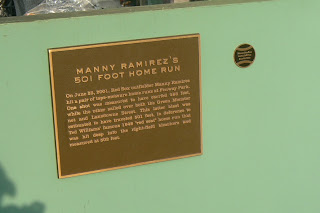 I then headed up to the Monster Seats. By random chance, this was the Monster game I chose when they went on sale in the off-season. (I also ended up with Monster tix for the 100th anniversary game, but I got those much later as that game approached.) Here's a Manny plaque. 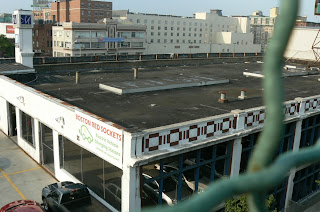 Check out the balls on the roof across Lansdowne. I got no more BP balls--one I let land so close to me it almost brushed me. It bounced right back onto the field. If I had a glove, it was a can o' corn. In fact, I should have just made the easy bare-handed catch, but ever since Vernon Wells almost broke my hand I figure just let it land and then try to grab it before anyone else. 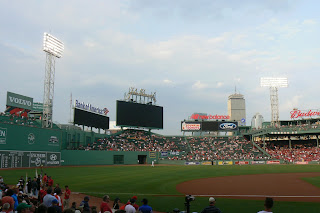 I knew Youk would come out to stretch and run, so I went down to this spot. (Notice that the scoreboards are turned off for some reason.) I thought when he came out, I'd notice while everyone else would be late to pick up on it. But no, everybody was ready to "Youk!" It was a great moment. He'd been on the field for BP, but this was his official in-uniform emergence, and the fans that were there proved that they'd been anxiously awaiting it, as you see in that top video. 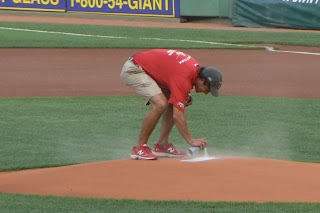 A guy spray-paints the rubber. Or whatever. 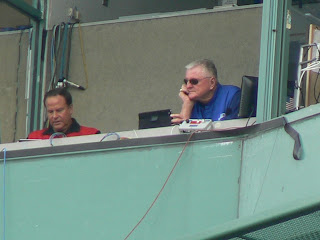 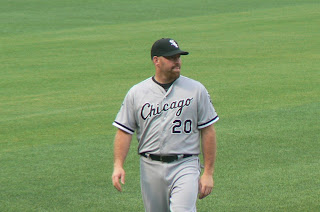 The weird sight of Kevin Youkilis on the White Sox.


And here's the moment when Kevin is announced in the starting lineup. 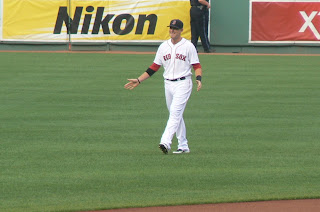 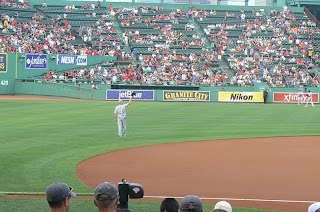 Youk is waving at Papi here, not doffing his hat to the crowd, though he would of course do that too. 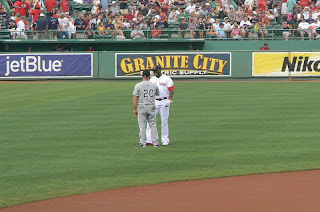 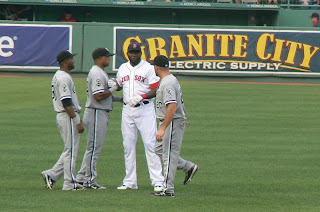 Papi and Youk and two other ChiSox. 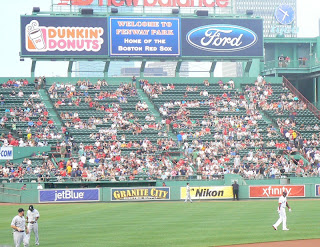 Youk and Papi parting ways--but I really threw this shot in to show you the NEW CLOCK at Fenway. I know, they already had a new clock, but it's now "tyco" instead of ADT, and it's now a circle instead of--a hexagon I think? This one also lights up, I don't think the old version did. The worst thing about this clock is that it's set back, so there are lots of spots in the park where you just can't see it. The digital clock is on the left scoreboard, but that one disappears when they're utilizing the entire board. Anyway, tyco? Wasn't that the CEO who killed his kids or something? Maybe Bill James pushed for the change.... 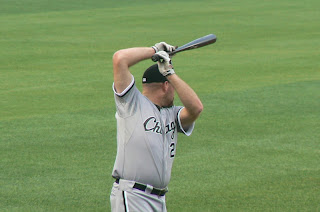 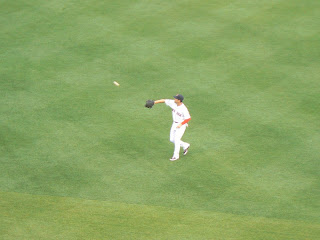 I went back up to the Monster for the start of the game. Great to see Ellsbury back in the lineup! 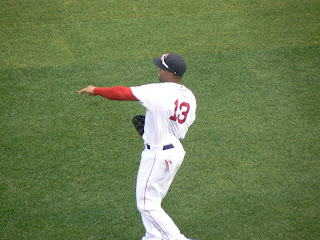 And Crawford! Suddenly you listen to the lineup and it's like, "This guy's awesome. So's this guy! And this guy too!" And on and on. Terribly, we'd end up losing Papi for a few days as he rounded the bases on AG's homer.


Youk announced as he comes up to hit in the first. It was really fun--everybody was just lovin' Youk all night. 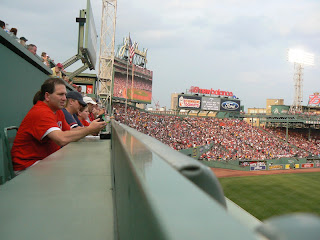 I don't think I've taken this shot since the new boards were installed. 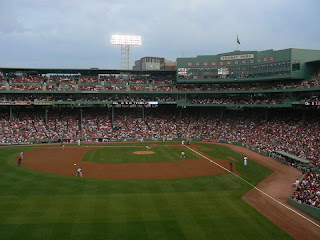 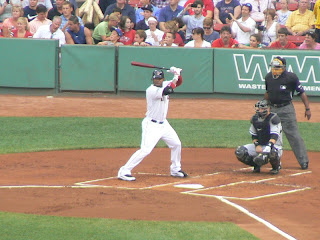 Crawford up. He started both our rallies tonight. 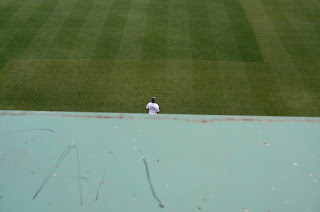 Looking down the wall at Carl. 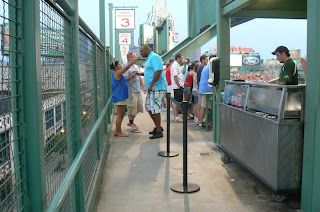 Sam Horn on the Monster! As you know, I've seen this guy everywhere. At my local grocery store, on the street in Miami, at the 2007 World Series DVD premiere party, at the Yawkey Way Store, at Fenway as a player, and now on the Monster.

So it was 1-1 after 1, but then no runs were scored until the 8th. During Sweet Caroline, I noticed they turned the music down for not only the "oh oh oh" (or "ba ba ba" if you're in that camp--most people don't realize there is a camp other than their own) and the "so good so good so good," but for the words "sweet Caroline," too. It made for an extra good sing-along, and the crowd was amazing after that. I kept getting this great feeling, like, "summer is here" or something. At this point I had gone around to the third base deck, as I'd been relegated to looking over people's shoulders on the Monster, and I started snapping pics of everybody who came up/got on base. I felt like a magic moment was inevitable. Everybody seemed to know it. Add a pitcher who can't throw strikes, and you've got a recipe for extreme likeability. After two walks, Adrian stepped up.... 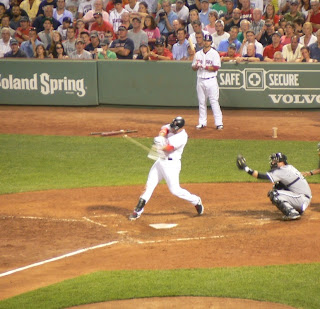 I always use that joke "this was a home run, as far as you know," but this really WAS the home run! 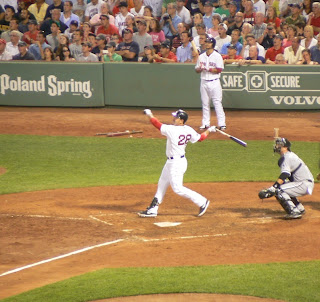 See? I love watching the fans' mouths go from closed to open. It was a 3-run, tie-breaking dong. We added another, and then Ace closed it out. 5-1 win. It was only after the dong that anybody left, so I never even bothered going closer. Summer + great weather + close game + two key players returning + Youk = electric night at Fenway. I'm glad I was proverbially there.

Comments:
Some of these pics are smaller than they should be. Turns out it's because after 8 years on Blogging, I've finally reached my photo limit--1024 MB! I guess I have to do something about this....

Jere, nice blog as usual. I was hoping to see you tomorrow at the game, but I'm glad you got a ball. I'm looking forward to seeing Youk again. BTW, i haven't really listened to WEEI since 04, when they gave up on the Sox before the all star break

I have no idea why it signs me in like that

In that last picture, how about the half dozen or so fans that are bored silly and don't even bother watching?

Is there a specific group you mean? I'm looking at the bigger version and I don't see too many who aren't watching--though this is only a half-second after contact; in the next of the rapid-fire shots, everybody's head is turned toward the ball. There's one woman with what appears to be a medical issue. Bottom right, hand on head. She never moves. Then over toward the left in the front, there's a girl with sunglasses whose head is in the wrong direction, but again, she snaps to attention in the next shot. And one girl kind of behind her who may be texting. Man does that piss me off, but that's a society issue not a Fenway issue. But I hate it when I'm at a game and I look around and most people are looking at a screen. "What my stupid friends are 'up to' right now is VITAL to my life as I'm out at a baseball game." So fucking stupid. Phone companies are the worst pushers in Earth's history. Nobody needs this shit. They do it because they have it.

Oh, and I'll give you a guessing game. In the shot taken after that last one, two people stand up before anyone else. Guess which two!

Mike--glad you're on board with the anti-WEEI sentiment. Good luck snagging tonight, I will not be there for this one.