Baseball is back tonight. Sox-Rays, 7:10. And now, the second and final part of Ryan's trip to Wrigley. All pics/text by Ryan. (Part 1 here.)

Game time: 6:05. We get there and go up to our seats in the upperdeck front row. BP is still happening. A ball heads into the ivy with this result: 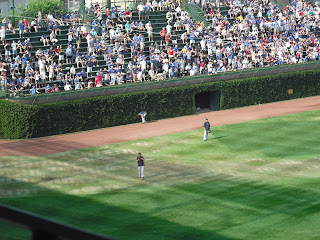 Also hilarious was that Vince Vaughn was the celebrity of the night, throwing out first pitch and singing that ramshackle “Take Me Out To The Ballgame” in the 7th. Here he is from above. 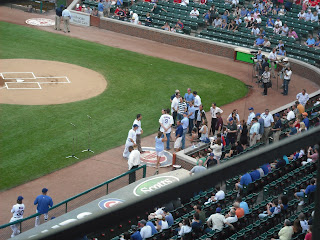 Also there was some sports reporter whose name I can’t recall, but who I’m fairly sure is a dickhead for some reason: 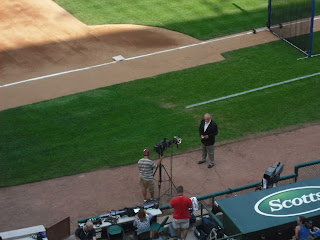 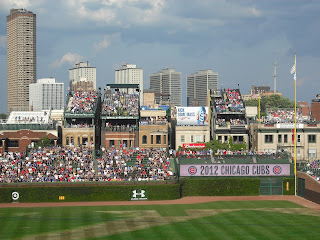 Jere is a vegetarian and a teetotaller, while I’m neither, so an ARSFFPT first as I review meat & beer-type things. The mysterious A- is a vegetarian but, in her words, “not a jerk about it.” Which supposedly means that she has a few hot dogs each year. These are the products perhaps least recognizable as coming from a real animal, so there is a certain logic, but still, weird. Nonetheless, Wrigley is renowned for it’s wieners. Here’s mine:

It was both visually striking and tasty, as were those pepper things. Beer-wise the beverage of choice is Old Style, which is basically the Chicago version of Narragansett. We got the impression that it continues to exist solely to be served at Cubs games. Nothing wrong with that, and better than Coors Light or whatever, of course. It was nice that they had people going into the stands to sell it as well, which is good since it stops fans from getting out of their seats every 15 minutes.

Getting up would mean missing stuff like this brass band who goes around the upper deck dressed in Cub uniforms. Couldn’t really hear them, but I assume it was excellent. 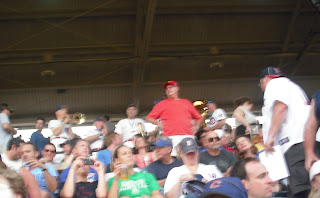 The game itself doesn’t need much commentary (having been a month ago anyway), the Sox narrowly prevailed, and the most exciting parts were Salty hitting that two-run dong, and the Cubs nearly coming back. There was a questionable catch in LF (by Podsednik?) around the 7th that actually looked like a trap from the stands because it bounced off the ground through the glove--and no one is used to the ball changing direction while it still appears to be in play, so our judgement was ‘trap’ but as I have since seen, that assessment was wrong, and the umps (who convened to discuss it) were right. 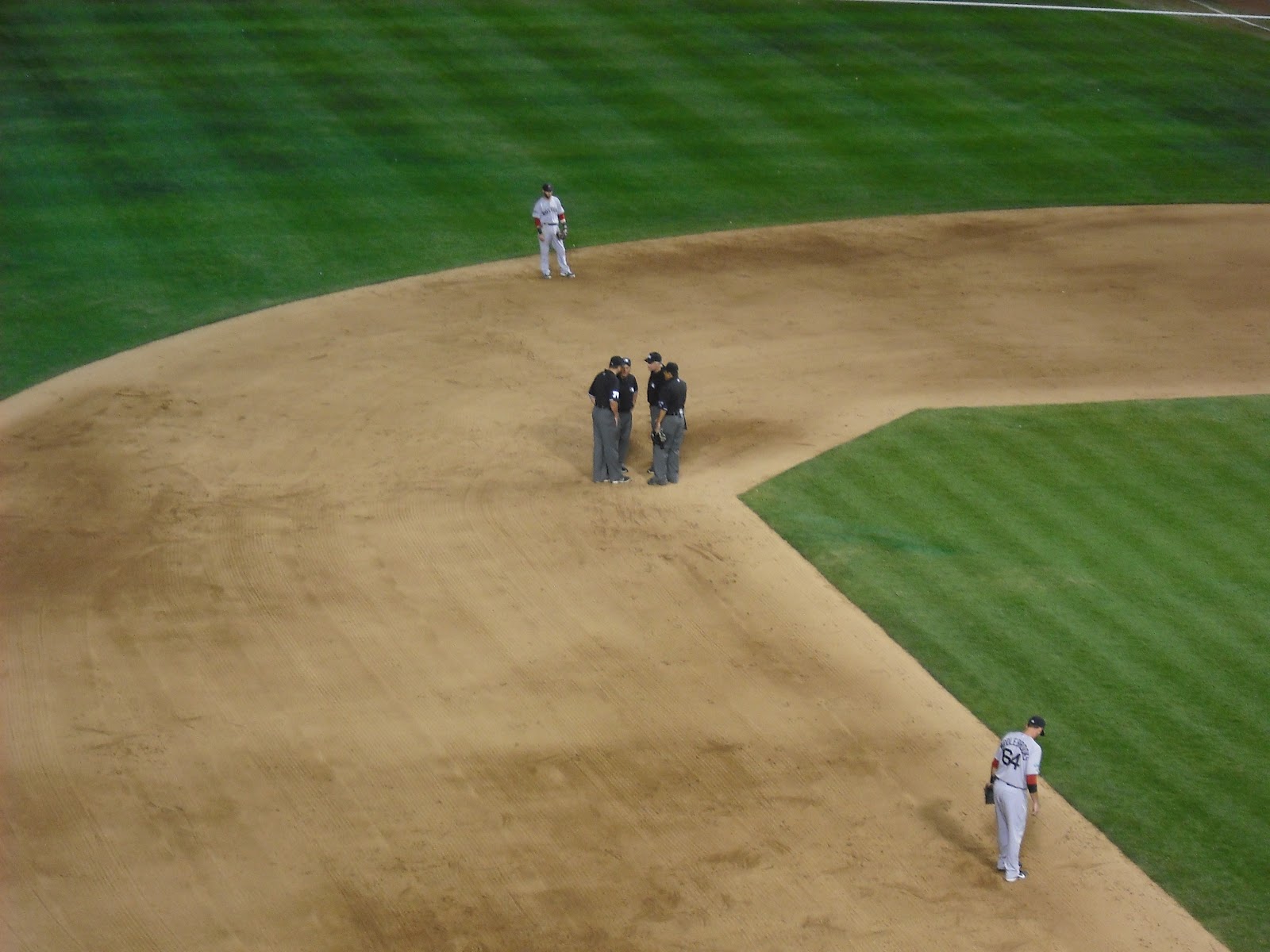 Also memorable was Ortiz getting the run signal in the 1st on a long hit to RF, resulting in a “close play” at home (out). Hard to ignore the irony of Dale Sveum finally profiting due to someone sending a slow guy home under dubious circumstances. 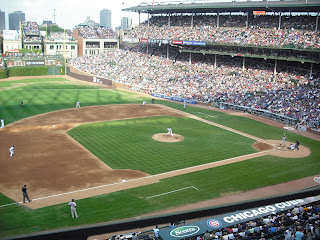 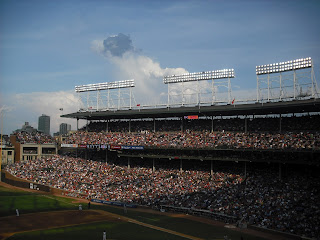 We ended up talking to everyone around us. The folks to our right were Tigers fans, behind us, people from Natick, and Cubs fans to the left— the full spectrum. The Cub fans were from a couple hours away from Chicago and we indeed got to bond with them over team history. (“My husband comes here every year, but he’s been hurt in the past.” “I know the feeling.” Bonding achieved.)

Here is a mixed-team-couple united in their mutual admiration of Jackie Robinson. Or separate admirations of Mo Vaughn and Bruce Sutter. 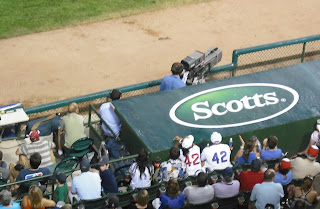 We had gotten a little wooden robot guy and took photos of him all over Chicago. Here he is enjoying the atmosphere of the friendly confines: 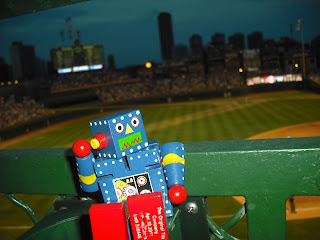 Wrigley does feel much like a bit of an old-time baseball oasis, more so than Fenway, which despite it’s history, has more modern features. With stuff like Wrigley just refusing to get lights for their park, and even afterward refusing to have more than a dozen (or so) night games you feel a bit like the rules don’t truly apply there. And it is remarkably quiet as well. The only sounds are rare PA announcements and occasional bits of organ music. This probably has the effect of making it more likely that you talk to your neighbors, as we did, to fill the many awkward silences. Fenway, of course, isn’t as bad as many other parks have gotten on this front, with the audio-visual blasts relegated to between innings, and none of those retarded games on the board. The Boston crowd doesn’t require ceaseless entertainment on the jumbotron, or to be told when to cheer, but I do sometimes worry that we’re moving in that direction, with the increased use of the video screen. Even so, Wrigley has even less of that kind of thing. Their only screen is this one: 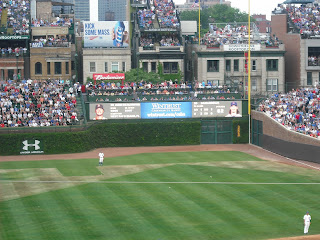 and it only shows hitter-pitcher matchups and the rest of the boards are the high-school football level ones and the hand-operated landmark in centerfield. (Also visible in that picture is an ad that Budweiser changes for every series to antagonize the visiting team.)

Nor is there nearly any advertising. Sure, ads are part of the game, and when you look at parks in the 1930s or whatever, it was far worse than now, but since they were “old-timey” they seem innocent and nostalgia-inducing. What is more significant, I think, than the comparable lack of ads, is the fact that every time the Cubs try to add something there is a massive uproar, which I wish is something we could say. There was even controversy about United putting an ad on the roof of a house across the street. Something that the Cubs organization has no control over, yet they still did as much as possible to stop it despite obviously having no resource other than outrage. You’ve got to hand it to Cubs fans on that front. (Whether or not it started out that way, I prefer the monster big and green, don’t see the necessity of a “Team Standings” area, and feel weird about how that Jimmy Fund logo of a kid swinging a bat just doesn’t look right, but no one can really say anything, because he has cancer....)

There is also a significant impediment to altering many aspects of the park because so many of its features have been classified as historical landmarks, like the ivy, and the scoreboard, and changing them in any way requires going through all sorts of red tape. Which might be an explanation for the fact that, according to the tour, all of the manual CF scoreboard operators have been men because it’s sweltering in there (requiring constant water ingestion) and the only toilet is a funnel with a tube. Ladies, are any of you willing to hold it for a couple hours? Job Opportunity!

So on stuff like old-fashionedness, general lack of random bursts of music, video screens, Wrigley gets an edge. A person from 1920 would be more comfortable there (he’d also be really interested in hearing about all the years his beloved Cubbies have won the Series since then...you’d have to point at someone’s iphone to distract him while you ran off). However because it has been allergic to nearly any construction, it is more run-down than Fenway. And other than the ivy, there are few idiosyncrasies of the park itself.

Bad points? Well, I’ll just say it, Wrigley is architecturally boring. I’m sorry Cub people. Fenway wins this one by a mile. And I’m not saying that people making new parks should add weird features like the flagpole in Houston just to be interesting, but Boston just got lucky here. In the words of Sir Francis Bacon: “There is no excellent beauty, that hath not some strangeness in the proportion.” By designing yourself to fit into a narrow city block with unusual angles and shear walls all over the place, 100 years hence, they ended up with something beautiful. With Wrigley, design-wise, it’s a bit of first half-of-the-century boilerplate. Minor-league parks in the middle of nowhere usually have similar designs. I’m also not a big fan of putting the bullpens in foul territory. I’m sure plenty of catchers have been blasted in the head with foul balls. 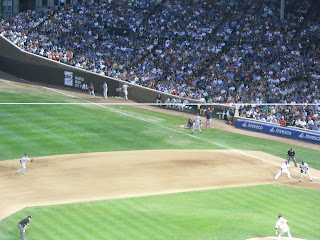 And unfortunately for the modern team, there simply isn’t anywhere for the park to go to expand or renovate— they can’t go above the upper deck, they can’t go over the bleachers, there is nothing new happening there. Fenway was fortunate to have been built in such a way that the area above the grandstand was totally unused, thus clearing the way for smart expansion in the future. The only new area there is on the roofs of the houses across the street, and they aren’t actually even owned by the Cubs -- they are mostly owned by private companies now and according to our tour, the Cubs tried to sue them, failed, then threatened to erect opaque “wind-screens” unless they got a cut of the ticket sales for those things, they reached an agreement, and everyone was happy. Here is one up close: 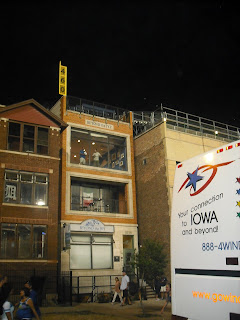 It is also cool how the park is so intermeshed with the neighborhood--how normal houses are visible beyond the bleachers. It’s interesting to note that that is something that simply isn’t possible to create anymore, no new park could be built in the center of a neighborhood without it completely disrupting everything (even if those houses have been essentially hollowed out by their roof-bleacher owners, and every business in the surrounding 2-block radius is baseball-related).

So overall, I strongly recommend it if you’re in the Chicago area. I can’t really be objective, and other than Boston I’ve only been to Baltimore and Philly, but I can extrapolate from them that Wrigley is special. I’d be rightly proud of it if I were a Cub fan.

So eventually the game ended and since the Cubbos lost I was able to snap this blurry picture of their famous W/L flag (so that commuters could see the outcome of the game from the train tracks past rightfield). 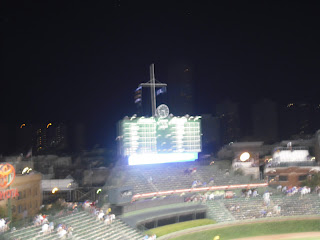 The opposite of the L is the W, displayed on this surprising t-shirt of our former GM: 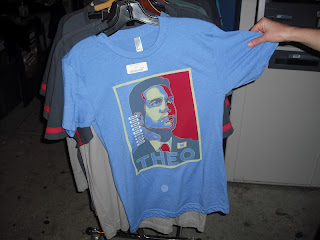 Not everyone was happy to have us I guess. Everyone is welcome to their opinion: 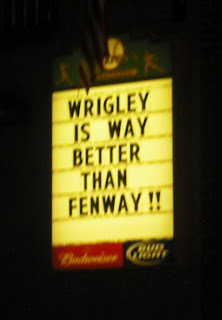 Doesn’t bother me though, as this photographic evidence demonstrates, we CAN all get along 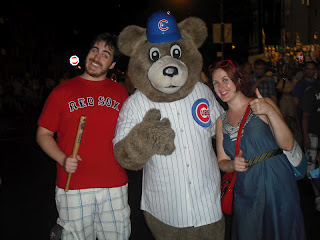 Comments:
Thanks Ryan - that was awesome. Hilarious and interesting. Good job.