Reader-pal Ryan recently went to Chicago for the Red Sox-Cubs series at Wrigley Field. He has been kind enough to share his thoughts and pics. Take it away, Ryan: 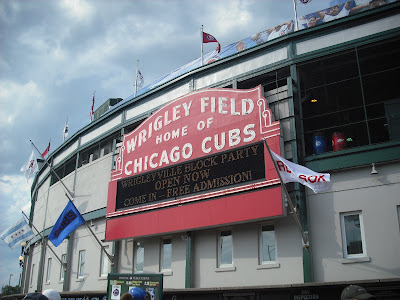 So to those of you who don’t know me: I am a Rhode Islander, an Astronomy grad student, and a longtime ARSFFPT reader; so longtime that I remember when it was called ARSFIPT. Also longtime enough that Jere is now on my softball team (Providence’s premier physics-based softball team: Schrödinger’s Bat. Fall 2009 Low-division Champions!). I was thinking I should write something when I was at Wrigley, but got really busy doing important science things and only just got back around to finishing it, so sorry that it is so non-timely.

My girlfriend and I, (whose identity isn’t a secret but who I’ll refer to as A- throughout so she seems mysterious), were thinking of going to Chicago for a few days sometime around June, so when I checked the Cubs schedule to see what weekends they were at home, and saw that they were playing the Sox June 15-17 it basically determined when we would be going. We’d have gone to see the Cubs play anyone, because ballparks are worth seeing, but Chicago does have a certain kinship with us for obvious reasons, and having seen the convivial atmosphere in Boston last year when they visited us, I wanted to see the other side of it. 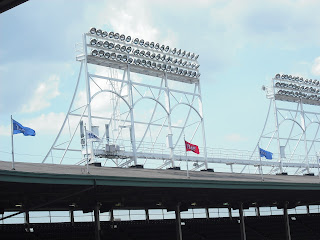 I got tickets for Saturday night— not a freaky midweek day game, unfortunately, as is the Cubsian custom. We got there on the Thursday, went up the Sears Tower (give it up assholes, no one is going to start calling it the ‘Willis Tower’), saw that curvy, mirror-surfaced spaceship that Obama captured and put in Chicago so no one would ever find out about it, and generally ate a ton of fried, doughy things to acclimate to the culture. As we were doing this walking I spotted an irregularly large number of people wearing Detroit Tigers paraphernalia. My hunch, that these were Michiganers ‘jumping the lake’ to visit the Friendly Confines of Wrigley, turned out to be right. By Friday the town was lousy with Red Sox hats & jerseys. That day we visited some other tourist stuff, a few museums, restaurants, and saw Stephen Merchant perform at the comedy festival that was going on that week. We were constantly running into Red Sox fans. Every time we got in the elevator of our hotel after Friday we got to make small talk about which Boston suburb we were from.

On Saturday, the game was at 6 but we were running late for our 2pm Wrigley tour, for no particular reason besides the fact that we had been walking around Chicago in the oppressive heat and it took longer to get to the train than we expected. Approaching the Wrigley stop, I knew we were getting close because the distant tall buildings suddenly looked familiar— which was something I didn’t know I knew about. It was about 2:05 and I had to run around the stadium to the will-call window and then back to the tour entrance, but even though it had just started, the nice people pointed the way and had an usher bring us to the tour group. We hadn’t missed much, the tour group had just gone out to the bleachers and sat down to listen to the spiel about how the White Stockings begat the Whales who begat the Hippites who begat the Cubs. First I noticed that in a group of ~50 people there was a single pair of Cubs fans, about 4 non-denominational people and the rest were all Red Sox fans. Since were late we were sat on the outside of the group and across a row from the “original” tour members, right under the scoreboard. 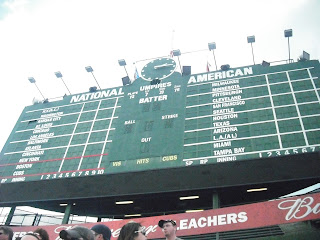 While we were listening to the guide, some Cubs were taking batting practice and Daisuke was running laps: 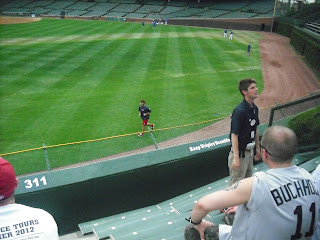 After a couple minutes a ball was hit near our group and one of the other two “late” people got it. The guide made a joke about getting warning if a ball was heading for his head. A few came to the deep outfield. I determined to catch the next one if possible. (I can just catch up on this 1880’s Cubs info on wikipedia.) The moment came and I was off like a shot. My physics/softball instincts took over, but for the first time ever, they actually put me under the ball! I ended up running over and jumping down about 3 bleachers to come up with it. Despite the lack of competition, I got a round of applause from my fellow New Englanders. Nice.

(A- assumed the applause was for not falling as I hurled my lanky, uncoordinated body down the bleachers.)

I’ve never even gotten close to an MLB ball, since I don’t usually get to games early enough for BP and standing room doesn’t provide much on the ball-front, so this was really special. Extra-Wrigleyness was from it being stained with green paint from Wrigley’s famous bleachers, not a frequent occurrence since balls hit out there, even during normal BP, are usually caught by people, and the ones hit during games (normally by the opposing team) get thrown back onto the field, in accordance with tradition.

The tour, though informative, and aimed at Red Sox fans, didn’t really take people to anywhere special or off-limits in the park. It went: Bleachers >> under bleachers >> near press area in upper-deck >> field box >> on field itself. Surprisingly, the Wrigley Bleachers are actually amongst the priciest tickets in the park so going out there isn’t something you can normally do, and that’s sort of cool. Since most of the games take place mid-week in the early afternoon, they developed a culture of alcoholic unemployed people sitting in the cheap areas, and once they realized it, the Cubs Corporation started dramatically overpricing everything, so some of the worst (and non-assigned) seats now cost more than most of the grandstand areas.

On the way out of the bleachers we saw the visiting batting cages. This is on the concourse, through supposedly one-way-glass, but it still feel like some kind of zoo exhibit. Saltalamacchia was in there. We could tell because he has a tattoo on his left arm that says “SALTY”. Hilarious. 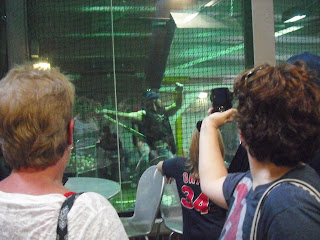 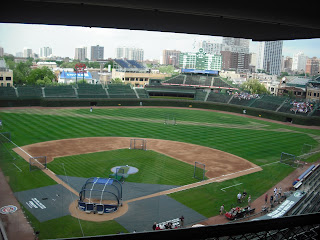 On the way out of the upper deck I got a shot of this giant macaroni: 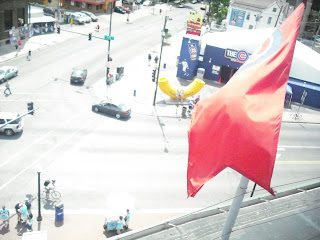 After the upper deck area we got down to field level and saw that Terry Francona was there hanging out with everyone. Some people said stuff like “Come back Terry”, as though he would just turn around, having left the team on some whim, and decide to return because some fatass shouted at him in Chicago. The tour-guide said some complimentary things about him, and then canceled it out by speculating that the tours at Fenway didn’t get to do onto the field itself. I’ve not been on one since winter ‘05 but I still know that they do get to go down there nowadays, so this guy is behind the times. It was weird that no one corrected him.

Out on the field I was mere feet away from most of the Cubs roster, but having no idea who any of them are, I was unable to appreciate it. 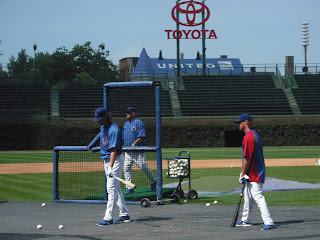 I thought it was weird to see the “green screen” thing close up. As if when I photographed it, an ad for Geico would appear on my camera. 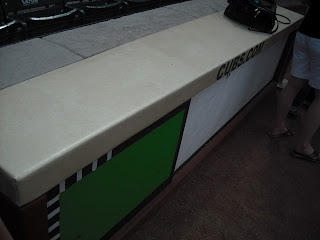 And here’s my trophy: 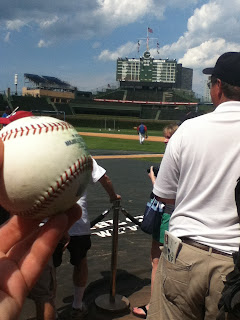 At this point, Tito was talking to some people within deliberate view of the tour group, and subsequently, Dustin “Laser Show” Pedroia emerged from the clubhouse. Check out these photos where I manage to take a series of pictures of him that would never convict him in court because his face is never seen (at least Tito is in the first): 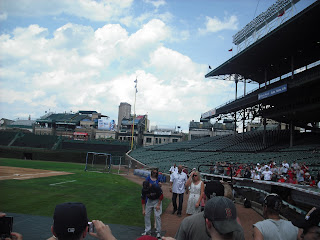 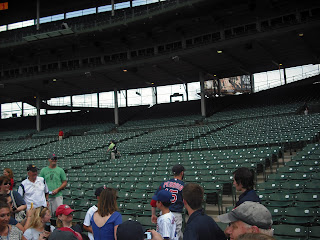 This is the best I did. He went off to talk to some other tour group up in the stands that had some kind of Dustin-Pass where he had to go sign stuff for everyone. Very weird.

As we were leaving, I saw a Sock signing things for people. Boom! Now I can get a signed ball! A wonderful lady & her man-partner told us that it was Ryan Sweeney signing stuff and gave me a marker so I could get my ball signed by him. He was obviously trying to be nice and attracted a brief storm of people. By the time I got there it was subsiding, and I was 2nd to last, so it was really nice of him to autograph stuff with a waning group of people. It was nice to get the autograph of a fellow Ryan. The next game he went on the DL, thus making my autograph more authentically from the 2012 Red Sox. 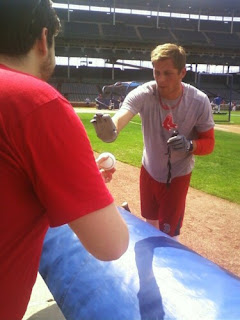 After the tour and before the game, A- and I went to a bar to cool off. She’s a somewhat indifferent baseball fan, but enjoys ballparks, history, and going to games. I was droning on about some of the idiocies of interleague play, with a particular emphasis on the unfairness of having division rivals play different teams during the season. I mentioned that there have been recent years where the end-of-year standings were within one or two game margins— and getting easier NL or AL opponents (cough, the Mets, second cough) could have been a determining factor in who got into the playoffs. And A- said the best thing I’ve ever heard on this topic:

“Hold on— these games COUNT in the standings?!”

I have never loved her more.