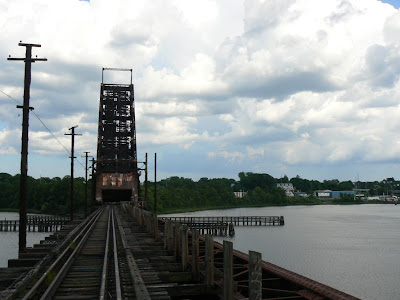 Next time you drive on I-195 east of Providence, look to the north as you cross the river from Providence to Shelbyv-- er, East Providence, and you'll see a train bridge in the "up" position. How do I know it will be up? Here's the view looking back toward Providence from the bridge: 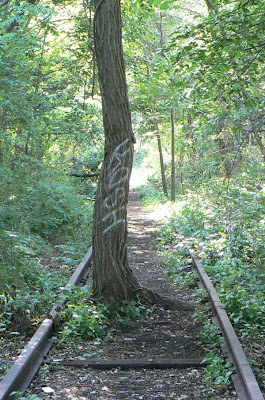 Unless a spectral locomotive comes through, there ain't no trains runnin' on this track. 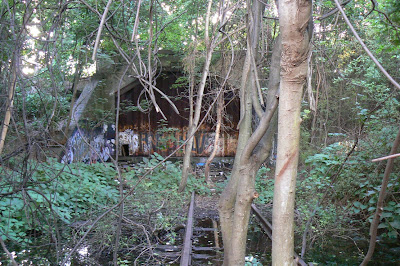 After a short walk from the bridge through the woods, you'll get to this blocked-off tunnel. Along the top of this picture is Gano Street on the East Side of Providence, by the Dunkin' Donuts. 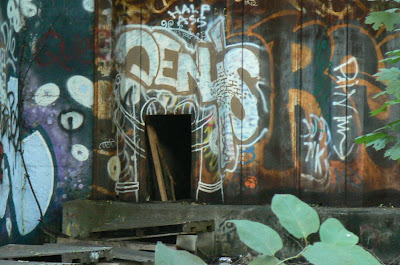 A closer look at the bottom-left. That's where you can go through. (I wonder if this tunnel connects with that "East Side Transit Tunnel" that only buses are allowed in. Ryan?) Kim and I did not venture that far. We took a left here and climbed the hill back up to Gano and walked all the way back to where we parked the car, at the soccer fields by the bridge.

It's a quick, fun, (legal?) urban adventure, complete with optional danger at both ends: The tunnel on the woods side, and the opportunity to walk out onto the bridge on the water side. (Look very closely in the top pic and you can see a guy with a Wu-Tang tattoo sitting out on the bridge. You won't see the tattoo but you'll see the guy.) The bridge walk is pretty safe, but you could go one step further and climb up the "up" part--I have read that it has been done. There's also a graffiti fun-zone out at the upthing, which you can see online if you do the proper web searching at ask jeeves or lycos or what have you.

Comments:
The train tunnel goes under the entire East Side, and comes out just below Benefit street near the First Baptist Church and that Steeple St restaurant. When still operating in the 70s people at the top of Brown's science library (the tallest building on the East side) could supposedly feel the building shake when trains went through. People (esp RISD kids) also used to try running through it. There is a page about it here: http://artinruins.com/arch/?id=decay&pr=eastsidetrain

That's really weird because when Kim and I were walking to WaterFire last Saturday, we were on N. Main and I saw this tall rusty thing on top of a structure, and I'm saying to Kim, "was this an elevated subway line or something?" I wanted to go all the way around and get up there, as it looked like the top was a courtyard for a building to the side of it. Now looking at the map, I see it's right at the spot you're talking about! The tunnel leads out onto that level there, and thanks to that site you linked* I see it then went right over N. Main via a bridge that's gone now. Funny that we'd JUST been at the other side of the tunnel minutes earlier, since our little adventure was before WaterFire. And I never made the connection that we had gone from one side of the tunnel to the other!

*I love that site--I was on there looking at info about the "Red Bridge," which is what led me to stories about the old train bridge, and here we are...

It seems all very Indiana Jones-post-Thanksgiving dinner walk from Nana's. Very cool.
ps: I still say we should all meet in Meriden someday and reenact the walk.

Just say the word and I'm there. I recently looked at Google Maps satellite view to find that walk-area, but couldn't quite find it.

A long, long time ago, I went to a show at The... Last Call? Something, it was a club in the jewelry district. I think the New Bomb Turks were playing. My friend introduced me to some friendly guy with a giant cast on his leg. The guy's name was Derek. My friend told me Derek was a daredevil-type guy.

Derek wound up jumping off the bridge into the water a few months later, just stunting or whatever with some friends, but he never came back up.

They used to sell t-shirts with the image of the bridge on it. I was always fascinated by it as a kid. It's been stuck like that forever... Anyway, I love the pictures. Thanks for this.

Nice. I mean, not nice for that guy. That Hilary woman is the one who made that shirt I believe. Kim does a lot of markets with her. She also did that Rhode Island/Texas shirt. I think I also interviewed her on that first episode of Randomonium.