Above, a video I shot walking under the stands, out into the crowd, out onto Yawkey Way, and back inside. I kind of thought it would be cool if a good play happened at the end once I was back in a seat--and an amazing one did! So either watch until the end or skip to the final seconds. Too bad I don't have a zoom on that cam. Now on to the pics: 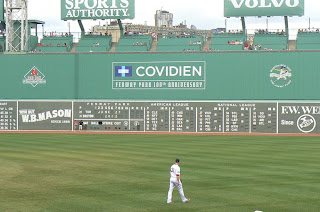 Lester started vs. their ace (who would be very un-ace-like). Oh, I should continue my tradition of telling you about parking and weather. I parked at my current secret free street and walked my 1.5 miles. Temps in high 70s, nice breeze, mostly cloudy. Missed batting practice, if they had it at all. 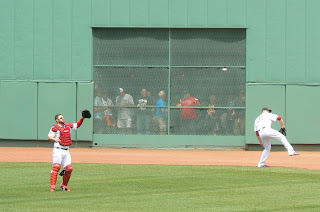 Fans watching Shoppach and Lester from the Bleacher Bar. 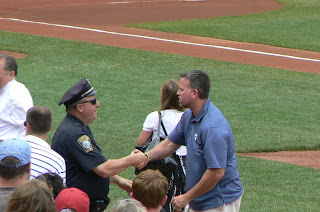 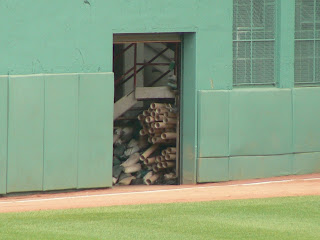 Tubes and bags inside that garage door in LF. 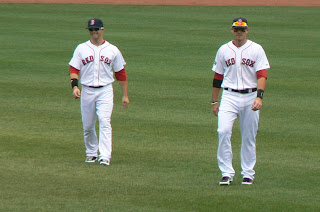 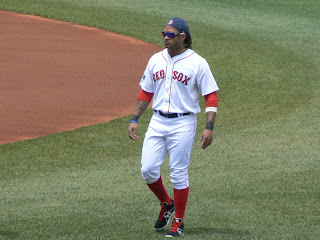 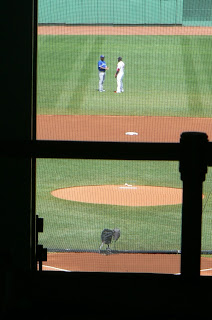 Papi on the field with a Jay. Know where I took this from? 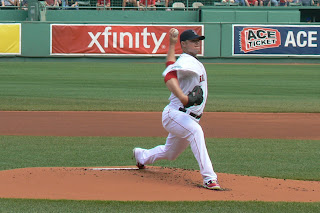 Jon Lester on the mound. He wouldn't even need his best stuff today.... 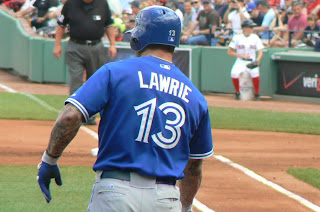 As you can tell I took a good seat early. 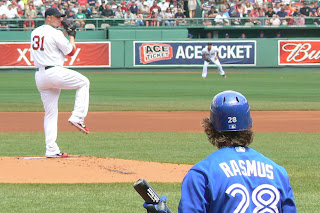 Rasmus on deck, Lester on hill. 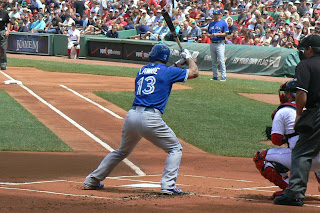 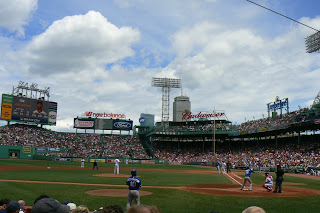 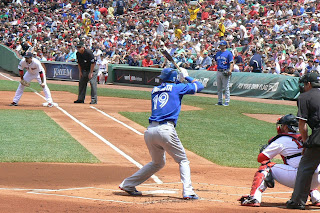 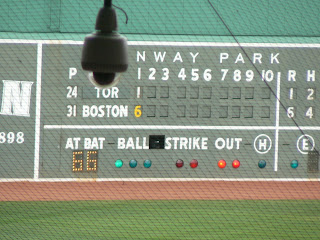 Soon I started walking all around. Got this shot of lots o' sixes on the board. We sent ten men to the plate in the first. 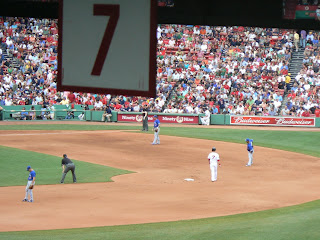 And now some sevens. 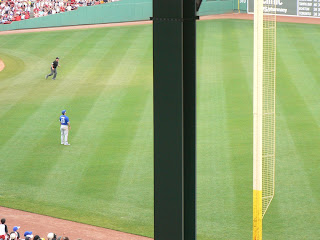 I went into this game hoping Papi would hit a dong so I'd have a shot to see him hit #400 for his career. As I lined up this shot of the Jays' super-deep shift, Papi launched one, which is why Lawrie is turned around. 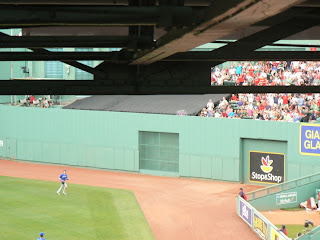 I quickly moved my cam to the right to catch the outfielders going back, but it was way gone. 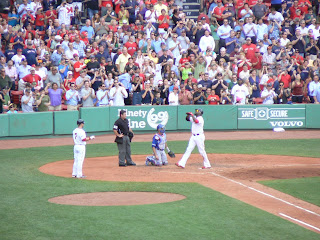 And Papi touches the plate on #399. The rout was on. Later, when Papi came up again to start the bottom of the 8th, I went out under the bleachers and prepared to catch the historic ball. But he struck out. (At that point, I started walking around and filming, as you see in the video. Okay, I'll give away the ending--it was the Darnell McDonald robbing-of-a-dong!) 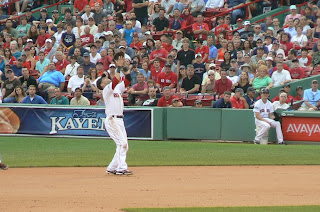 And as you know if you watched the video, I ended up in a good seat on the third base side for the ninth. Got this not-so-focused shot of Dustin catching a pop-up. 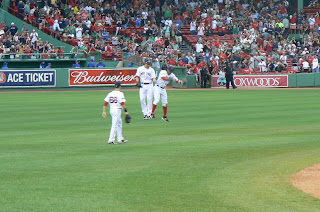 McDonald and Kalish celebrate the 10-4 win. We're tied for third now! And 1.5 out of second. We go to Seattle and Oakland now. Late night games the next three days, and five of the next seven. Stay up!

Wow! Sox keep weapons of mass detruction in the left field garage! Re Iraq, it was truthiness incarnate. Re Fenway, I think G Bush might have had a harder time convincing nincompoops that we had to bomb the Park.

Lucky you to be at that game. A shame you won't be in Seattle for the 300th.

Bonus note to no one: I did the "walk-up" for my ticket at this game. I had no cash so scalpers weren't an option--not like I wanna give them my money anyway. But I'm glad I didn't go that route because IN LINE for tix, with cops right there, a scalper goes right in my face acting like I'd be stupid not to buy from him. His price? 30 bucks for a $28 bleacher seat! And he was getting people to buy, too! The guy behind me took one, without even trying to bargain (I'm sure he could have offered 15 and the scalper would act like he's an asshole but then cave and give it to him for that price when he sees the guy start to walk away.), and after he pays, he says "I'm not gonna get screwed, am I?" And I thought, "you already have been, buddy." It's amazing how the scalpers can get the price they want instead of what the going rate is, just on attitude alone.

Anyway, I got to the window, and asked for a $12 upper bleacher. The guy said they NEVER get upper bleacher seats to sell there at the day-of sale window. Says he's sold 1 in 20 years or something. So I took the next-lowest, $20 standing room. Which is so much fun to buy without having to pay the shipping/handling fees!