"The Kim and I" parked for a few quarters and ate dinner in the Fens before walking through the soupy heat to the ballpark for game 2 of Marlins-Sox. Listen to what the organist played as the first song of the night in batting practice. 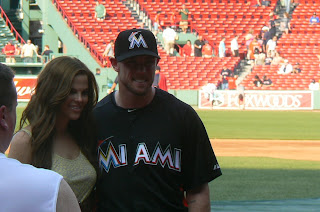 Check out those crazy Marlins colors. This, I believe, is Scott Cousins. I don't know who the woman is. (Anonymous commenter says it's his fiance Mandy Short--they even have an engagement page.) 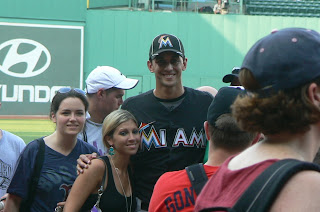 Everybody loves Cishek! People were getting their pics taken with him like crazy, and we heard all kinds of cheering when he came in the game. Just looked it up and sure enough he's from the Cape.

At this point we stopped by Allan and Laura's seats. You know them better as The Joy of Sox and We Move to Canada. I'd met them before but it was Kim's first time. So that was cool. They live in, duh, Canada now so they don't get to Fenway too often. It's always good to see people in real life who you deal with almost daily, as I'm always interacting with them either on our blogs or on the nightly game threads. 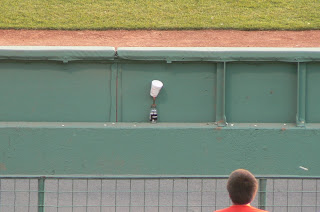 We headed out to bake in the bleachers. Look at the way the Marlins bullpen rigged up their seed-shooting contest cup. This is a common bullpen game. If you ever see a bunch of seeds (or shells or whatever) on the warning track, those are the ones that went over the wall onto the field. At bottom right you can see one in flight. I'll never forget being above the Red Sox bullpen at Camden Yards, and after a while of watching this cup game, Varitek emerges, slowly walks toward the cup, and steps on it. Speaking of Jason, he was in the stands tonight. My pics of him from 500 feet away aren't worth posting.

The sun setting in Kim's sunglasses. It didn't cool off much when the sun went down. I think game time was something like 94 degrees. But up in row 47, we were the lucky ones who got a slight breeze. 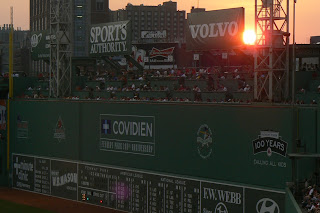 Sun setting not in Kim's sunglasses. 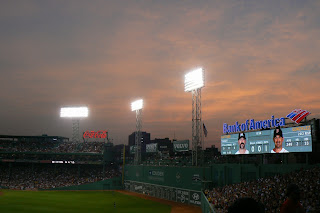 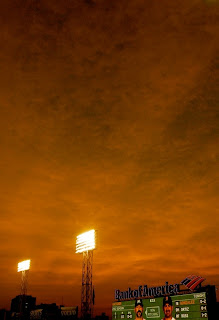 I crazied this pic up a little. 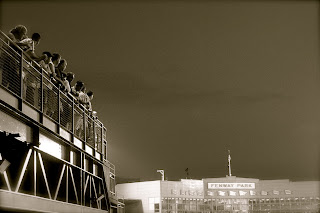 Same with this one, obviously. 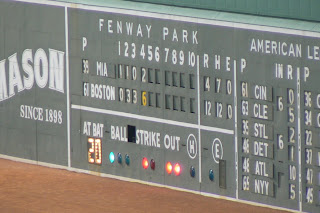 As for the game, we scored in big bunches. Aviles donged, so did Salty, and Papi hit a grand slam and also scored from first on a three-run double by CoRo. Middlebrooks would later add to the dong brigade in a 15-5 win. When we hit 12 runs, they played "Ballroom Blitz" initially. So I knew right then they'd have to play that 1-2-3-4-5 pinball song when the inning ended. Which is why I was ready to roll when it happened. The rest of the division lost. We're 6 out of first and ahead of Toronto. We've won 6 of our last 7. The Yankees have won just 5 of their last 7. Ha! 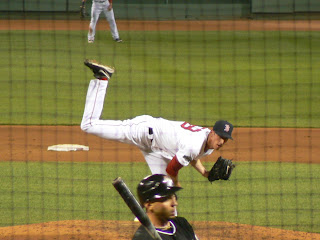 After 7, we moved down close. Here's Mortensen. I'm thinking by the batter's reaction that this pitch wasn't close. 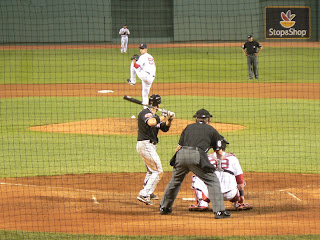 The sweet view from behind the plate. 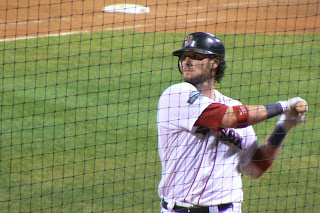 We almost saw something super-rare in this game. John Buck--who needs to be calling himself JoBu--hit a dong, but you could see he pulled something on the swing. It took him so long to run the bases. Had he not been able to make it, we would have seen a pinch-runner enter the game just for the trot. It's happened before! On a later at bat, Buck saw one pitch and then had to finally leave the game mid-at-bat. So we really were that close to the rare pinch-trot. 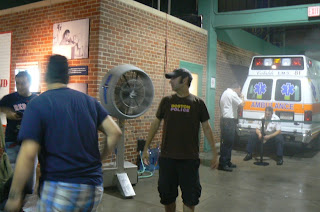 Kim took this shot of me at that hydro-fan unit or whatever, on our way out of the park. (Side note: My "'Boston Police' in the Dunkin' Donuts style" is easily my most beloved shirt by the general public. So many people tell me they love that shirt when I wear it. It's blowing out all my other shirts in the compliment category, like 27-9 lifetime. I wish I knew the local artist I bought that from so I could give them credit. I know I got it at ArtBeat in Somerville but I don't know whose awesome idea it was....)

On the way out:

Comments:
Yay, thanks! (And I loved Papi's "outburst" (Don/Jerry) too.)