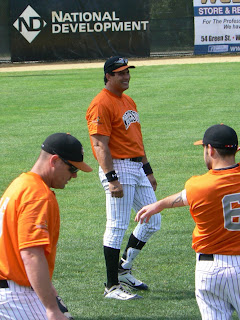 Kim was selling her soap at a street fair in Worcester, so after checking that out, I decided to go to the Tornadoes game, what with Jose Canseco being the team's designated hitter. As it turns out, I almost saw history. In the "independent league" sense of the word, at least. 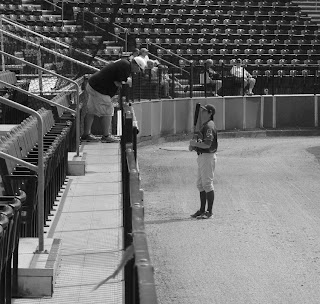 This seemed like a very black-n-white-ish shot to me so I stripped the color out. 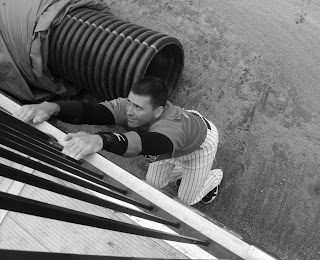 Same deal with this one. 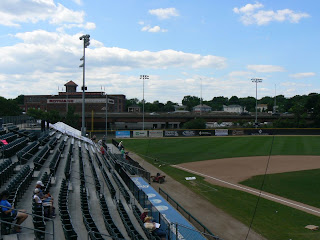 Okay, enough artsy phartsy, let's look at the field. It's called [Corporate Name] Park at Fitton Field. Just over the left field fence is Interstate 290. I was hoping to see Jose break a moving windshield or two. 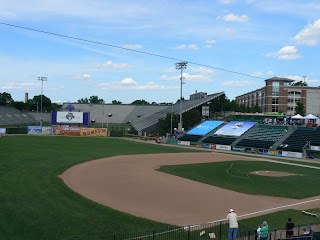 Beyond right field is the Holy Cross football stadium. 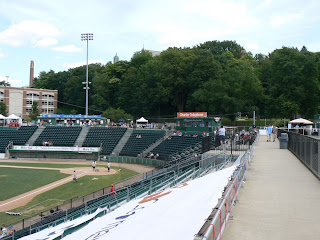 And behind the first base side the terrain rises dramatically to the campus. But if you try to find this park, prepare for an adventure. I ended up taking an unmarked road that happened to take me through the campus and into the parking garage. Kim tried to join me there, but gave up--and she's the one with the GPS! 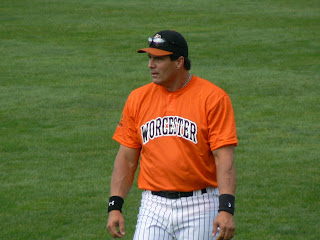 So suddenly there was Jose Canseco and his giant veiny arms. 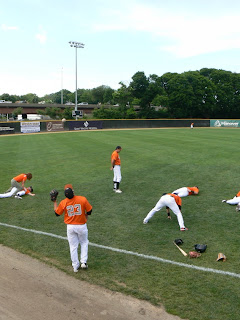 I got the feeling he doesn't have many friends on the team. It seems the only people he talked to were non-players, and that was rare. 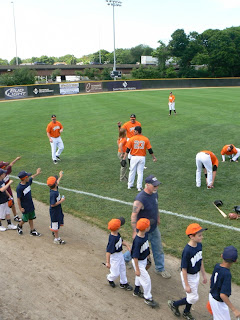 I'd love to tell you that Jose is waving back to these kids, but no, he had no interest in the fans--he was talking to the trainer and making the "this high/tall" or "I've had it up to here" motion. 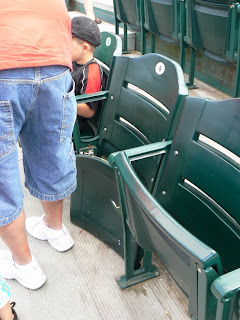 A kid right near me went to put a seat down, and it broke right off! How does this organization allow this? Front row, too. 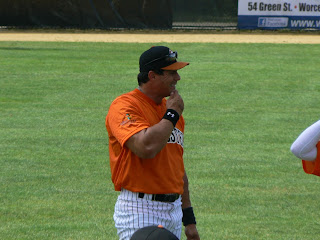 Look at Canseco's arms compared to the one on the right.


Above, a funny moment when Canseco is announced with the wrong uniform number. Hey, it's an honest mistake, he's only been wearing 33 for like 30 years.... 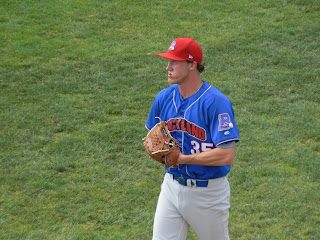 Here's the starter for the visiting Rockland Boulders, Pat Moran. 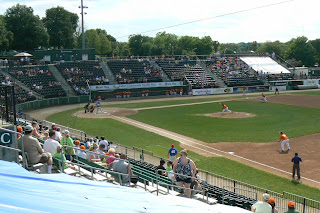 First pitch of the game. It was really hot when the clouds weren't covering the sun. And there's no cover at this park. None. Fortunately we got a lot of cloud time. 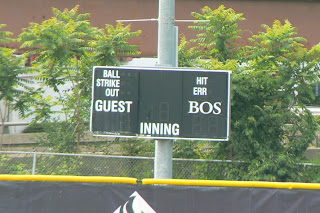 I'm confused about this one scoreboard in left field. Is this to give us the Red Sox score? And if it was, would they really be giving pitch-by-pitch results, including hit/error calls? The thing was blank all day, and the Red Sox were playing at the time. 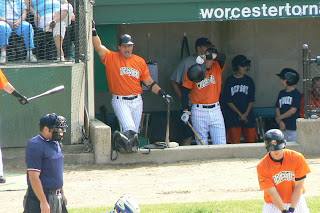 Jose about to come up for the first time. 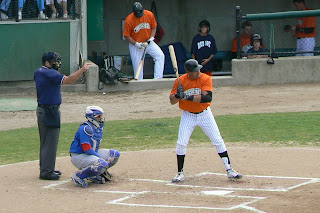 Jose batting. I just found out now that he hit his first home run of the year Friday night. But his average is well below .200.


Above, the result of Jose's first AB. 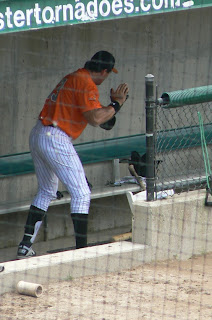 He did that thing where you practice your swing with no bat and your palms open after making an out once. "See, if I'd done this, it would have been a home run." Of course, he did this by himself. It's almost as if he's pitching a lifelong no-hitter, and no one's allowed to talk to or even look at him. 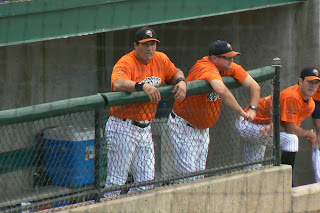 Here he is looking on from the dugout. Judging by the size of the Sunday afternoon crowd, Jose is not much of a draw. 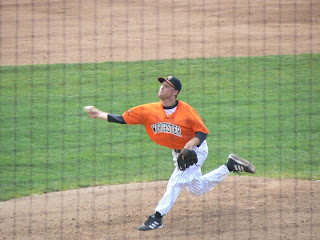 This dude (Mike Mullen) had a crazy wind-up and follow-through.


Above, video of said wind-up and follow-through. Didn't I see these moves in that "Virtual Insanity" video? 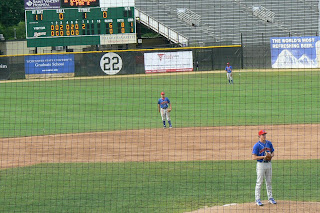 So Pat Moran took a no-hitter into the 7th. He got Canseco for the third time on a groundout. But with two outs, he gave up a clean single. And that was that. 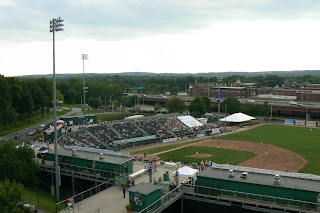 And then I left. But not before getting this cool shot of the field from the top of the parking garage. I guess the guy ended up with a three-hitter.

As for Jose--it's always fun to see a major league superstar at a tiny park playing with a bunch of guys half his age. And I was happy with the guy for telling what turned out to be the truth about steroids. But I'm thinking it might be time to hang 'em up. If you can't succeed at the sub-minor league level, it's probably all over. But you never know, Suzyn.

Comments:
That is really sad to see,have many happy memories of watching the Bash Brothers while staying with pals in Oakland,that he should now be reduced to this....

I've been to a few Can-Am parks, and the Worcester one is my least favorite. You should check some of them out sometime! Unless you already have, then never mind.

Well, let's see... I've been to Waconah Park, back in the first year Gedman was with the North Shore Spirit. The Berkshire Black Bears were the closest team in that league to where I lived at the time, so we chose there to see Geddy. This was pre-Can/Am but it was recently used as a Can/Am park so it counts.

I saw a New Haven Ravens game. Balboni was a coach at the time. Again, pre-Can/Am but later the Cutters played in the league.

I saw the Brockton Rox for that Bill Lee game--I see they're currently on "hiatus" from Can/Am! I was wondering why there were only 5 teams. I get their newsletter and they never told me they were out of the damn league!

I guess that's it.

HAHAHA!!! Nice "Virtual Insanity" name-drop!! As a huge fan of Jamiroquai, I never really realized how much that music video may have effected my follow-through until just now. Good stuff! Great pictures too... : )

And to Jere's comment: The Brockton (Rox), Pittsfield (Colonials), and the NY Federals (last years travel team) all folded due to financial reasons. As a result the Can-Am League will play inter-league games against various teams from the American Association to make up the difference in the seasonal games.

Mike: Thanks for commenting! This is awesome. Glad you found this and that you liked the pics. I might have to do a further post about this...I'd do it right now but I'm off to Cooperstown for the whole day this second........

I was just happy to see someone got my Jamiroquai reference--and it's the pitcher himself! Sweeeeet....