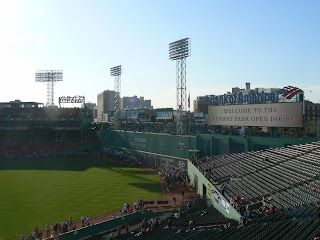 Here we go back to April 19th, the Fenway Open House. After I went through the tunnel to the field (Part I), and then walked all around the field and saw Kevin Millar filming his talk show on the warning track (Part II), I headed upstairs to the Monster, then to the EMC club and State Street Pavilion where I saw Bernie Carbo and some fancy schmancy suites. But I've shown pics from up there before, so I'm skipping to the part where I went to the new Royal Rooters Club beyond right field. This club is exclusive to season ticket holders. It kind of stinks that they're the only ones with access to all the great memorabilia inside.*

*It also stinks that as a 10-game plan holder, I was laughed at by the guard outside when I attempted to enter during a game. He actually said "not even close!" before telling me it was only for full-season ticket holders. I asked, "so even half-season people can't go in," at which point the guy realized that there must be a cut-off at some point and suddenly wasn't so sure of himself: "I'm not the one to ask...." So, hoping that maybe he was wrong and that all "season ticket holders" (which they refer to me as sometimes), I wrote to the team and politely asked. They never wrote back. Glad I got to go in there once anyway.

Comments:
A Royal Rooters membership cost a small fortune. I couldn't figure out the draw. Entrance to a bar? Some bats? I still don't get it. What was it there worth paying for?

I was under the impression it was just a "place to meet up for season ticket holders." I didn't know you could buy your way in separately. There is awesome stuff to see, and I'd pay a few bucks like I would to go to any other museum, but I don't think I'd pay a yearly rate just to be able to go (unless I was also getting season tickets!)--especially since I like to watch the game from the seats.

I remember it being in the hundreds for a season long "membership" or some other crazy amount. You needed to be a season ticket holder first...then pay this huge membership fee. I don't get the appeal.

Ohhhhh. That's inSANE! You don't get to go in there just for paying thousands for your season tix??