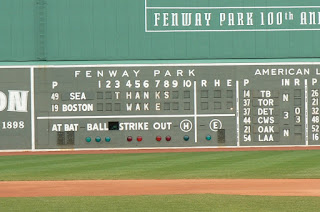 Tim Wakefield Day! Got a $12 ticket to this one months ago. Parked for free. Sat in a $130 seat the whole game, thanks to the early start and the constant drizzle. At least it wasn't a cold rain. 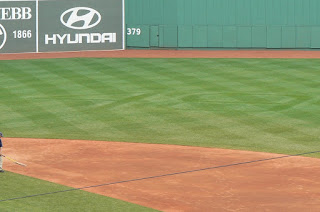 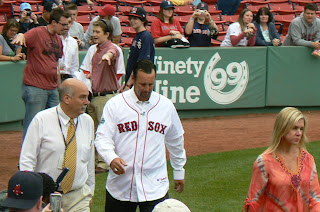 Got this shot of Tim being escorted from the left field door around to the home dugout. 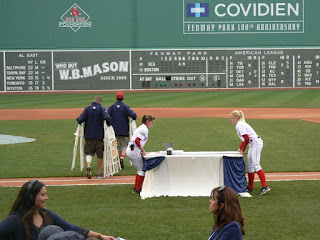 These poor girls had to move this table from the warning track out to the field, before being told to move it back. 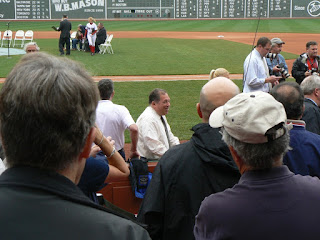 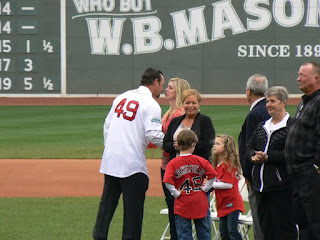 Wake comes out of the dugout and kisses his wife. 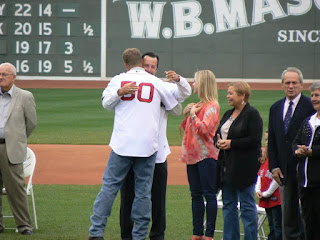 Mike Timlin was one of the guests. 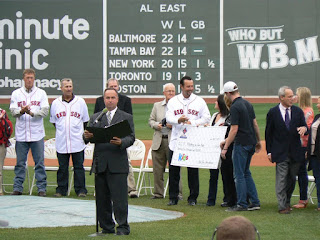 Wake's charity gets a big check from the team. Next to Timlin is Mike Stanley. Don "Announcer Boy" Orsillo was the emcee. 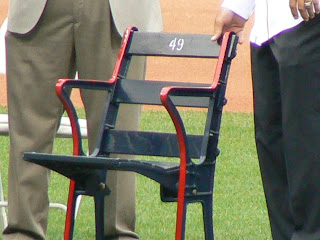 This #49 seat was one of the gifts. He also got a crystal baseball and a Ted Williams fishing pole. 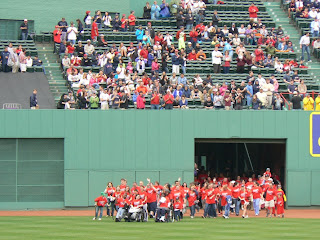 The Wakefield Warriors came in from center, causing Timmy to tear up. 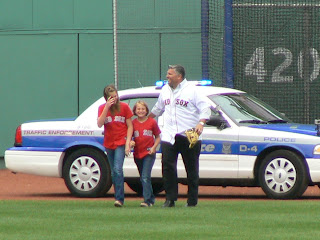 In honor of that time Doug Mirabelli got that police escort to Fenway, Orsillo said Doug couldn't make it as his flight was delayed, then was told he'd just arrived, at which point a cop car carrying Wake's personal catcher came in from center.


Above, Wake greets Doug. Just after I stopped recording, he crossed himself on the way to the catcher's box--and made a fairly clean catch of Wake's pitch. 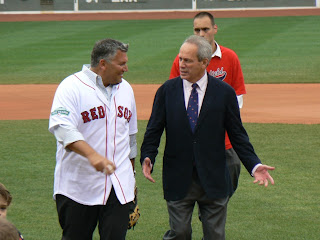 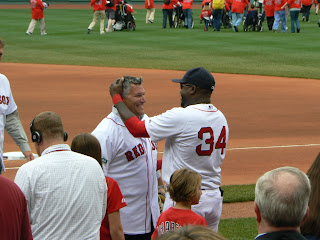 Dougie meets up with Papi. 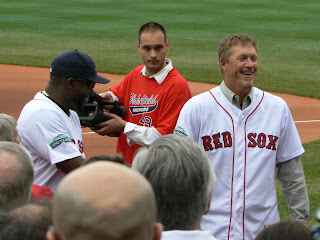 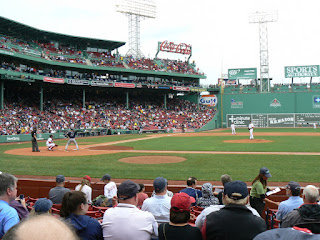 So I figured I'd just stay in this seat for a while. Turns out I'd be there the whole game--until the 8th when I finally decided to get a few minutes out of the rain. The harder stuff fell occasionally, but it was never bad enough to give up on sitting in it, especially once I got a nice primary drench. 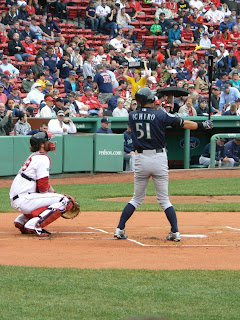 I've gotten this shot before of Ichiro, but in this one you can see how he's actually out of the batter's box. Shouldn't Bobby V be saying something about this after that Carl Everett debacle? 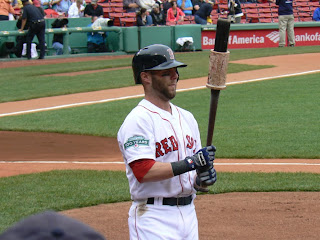 Dustin Pedroia from the rich fan's perspective. A lot of the seats around me filled up, but whoever had tix for my row never showed. 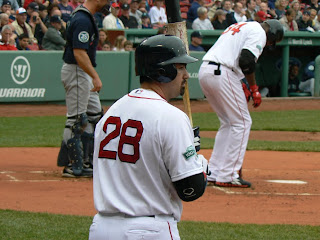 Gonzalez on deck, Ortiz up. 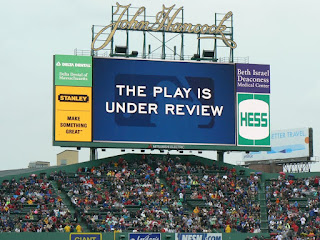 Smoak hit one high and deep to right, seemingly over the pole. They called it foul, reviewed it, and did not change the call. 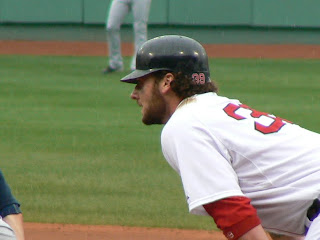 Salty in the rain. I had this genius method of keeping my camera around my neck but zipping up my hoodie over it to prevent it from getting wet. 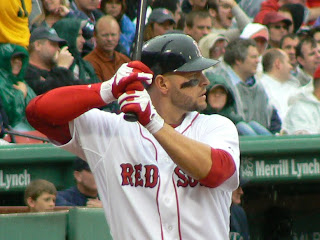 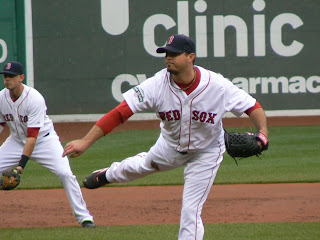 Josh Beckett was great today. He gave up zero runs. And hardly any hits. Here he is with Middlebrooks behind him. My favorite picture of the game. 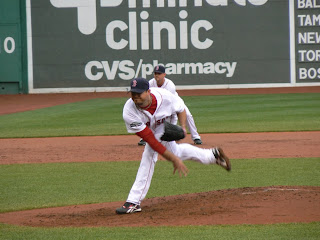 And here are those two again. 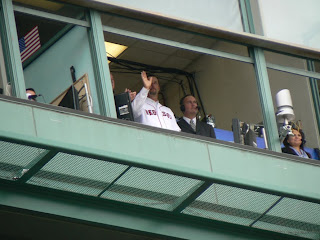 Wakefield up in the booth with Don and a little slice of Jerry. 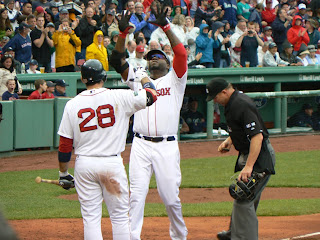 Papi hit a dong to right. Later he laid down a perfect bunt. Then he got to second on a DP ball where the fielder wasn't at the bag, went to third on a wild pitch, and scored on a Will Middlebrooks Wall Ball, aka a Will Ball. Our other two runs came on two Aviles doubles. 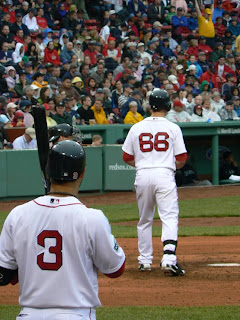 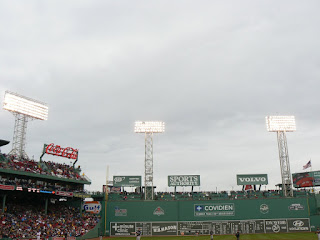 A gloomy day for the Seattle Mariners. 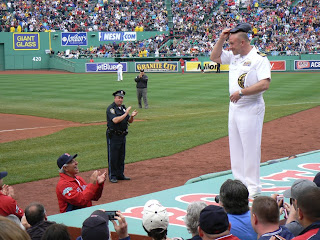 I thought it was cool that today's military person put a Sox hat on--and doesn't Bobby V remind you of Elaine when she was amazed by the spinning tires? 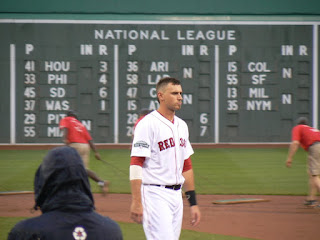 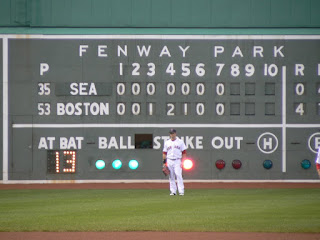 Both teams had palindromic linescores through 7. We'd add one in the 8th and win 5-0.

Another great day at Fenway. Five wins in a row.

Comments:
Oh and I heard Let the Good Times Roll at today's game! Maybe it IS a Fenway staple. I still just don't think of it when I think "Fenway songs" though.

Oh, and I botched BP at this game. I got there a little after the RSN line went inside. So I thought the Gate C line WAS the RSN line. Some guy came and asked if it was the Gate C line, and I told him it was the RSN line (incorrectly). NO ONE SAID ANYTHING. Then as it got close to all the gates opening with our line still not moving, and as I'm SEEING people going up and down the Monster Seat steps, it's hitting me what's going on. So now I'm thinking "Everybody knows I was wrong. And they're just silently laughing at me." As we finally went in, I secretly rooted for BP to NOT be happening, as I blew seeing it early from the Moster. But it was on. And I got no baseballs, though seemingly everyone around me did. At least I got that Ichiro video. But I botched even that, as I had JUST switched from 30 fps to 10 fps before it happened. Oh well.

In pictures, that new centerfield screen looks like it was edited into the picture in some way--like a bluescreen thing. It's as if they've improved the resolution too far and now it looks fake.