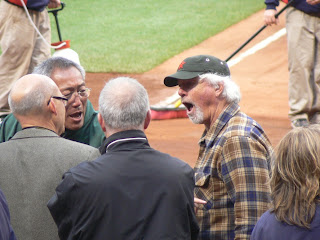 I tried to record Love Buzz playing, but it was the post-inning five-second song-clip so I didn't catch it in time. Anyway, Bill Lee was at the game. Here he is in incredulity. (Funny moment when the did the "Red Sox Legends" thing--they showed Jim Rice highlights, and played the corresponding Jim Croce song. Then they ended that and suddenly cut to Lee in the Legends' Suite and had to switch to that crappy "Will You Marry Me, Bill?" song. Lee laughed as they showed him on the board, and I swear Carl Beane sounded like he was still laughing when announced the first hitter after that.) 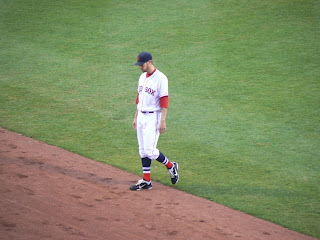 Our first look at the 1936 uniform on our starter Dan Bard. 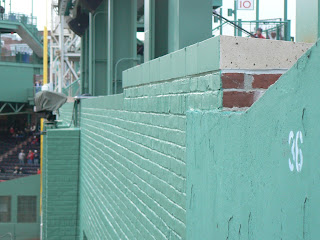 Kim and I sat in section 36 for 1936 night (which this guy will love). A few days ago, they were saying 62 degrees for this day. Then it went down to 52, and they announced the game time temp at 48 degrees. Good thing Kim had the blanket. We were bundled as mofos. 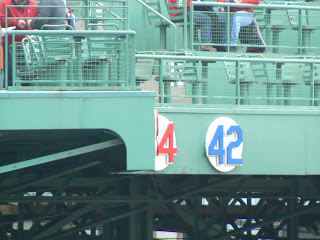 Odd angle at the retired numbers. 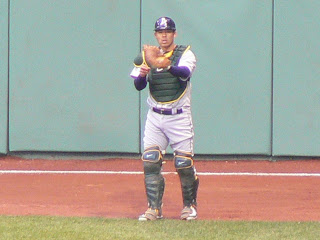 Funny how the A's had completely different colors, meaning some crazy clashing when they were wearing 2012-colored items. 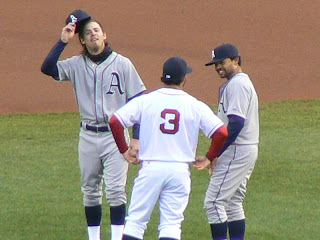 A better look at the Oakland throwbacks. I guess this is what playing the A's would be like today had they never left Philly. Pictured are Reddick, Aviles, and Crisp. 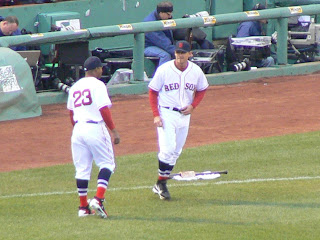 My first look at Will Middlebrooks in a Boston Red Sox uniform. This dude had to carry the Hello Kitty backpack. 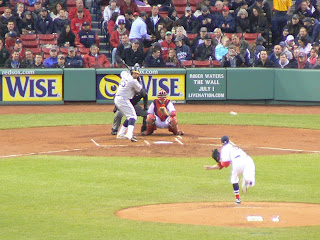 The A's helmets were in the 1936 style--except this guy wore the current helmet. The Red Sox helmets were 2012 style. 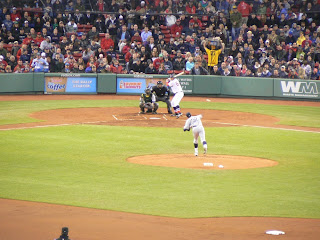 The first pitch Middlebrooks saw in the majors. He would walk on four pitches. Later, he got his first hit, which I did a terrible job at recording: 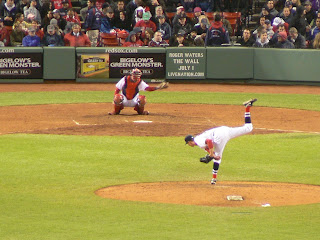 Mortensen was making his Red Sox debut--check out that follow-through. 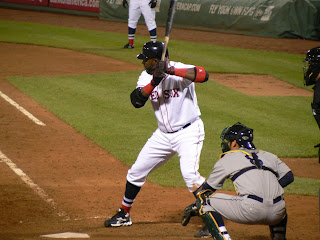 Around the 7th we moved down close. 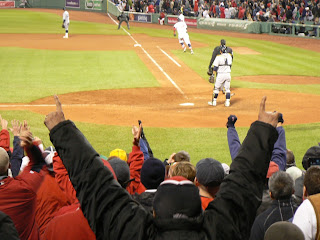 This is a weird shot that I snapped on Papi's ball to the right field corner--look closely and you'll see Reddick wrestling with the wall. 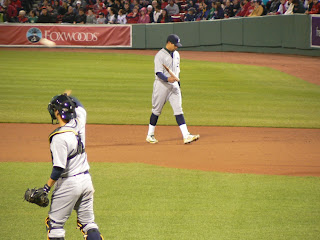 Two games in a row with a broken bat piece out on the field! 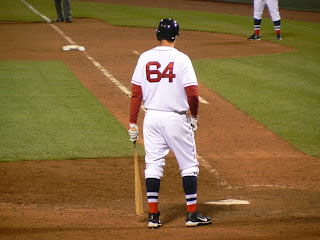 Middlebrooks at the plate. I'm sure Kelly wil have some better pics. I saw her there tonight. I was waiting for Kim to come out of the ladies' room, and Kelly was walking in. I decided it would be awkward to say hi to her in that situation, and even weirder to stop her as she came out. So when Kim came out, we just left the area. Shortly after that, my camera starting effing up, and I thought I might need to go track down Kelly after all--but it fixed itself. Anyway, I just watched some of the game replay on NESN, and there was Kelly, tonight behind the lefty batters after last night's behind-righties performance! 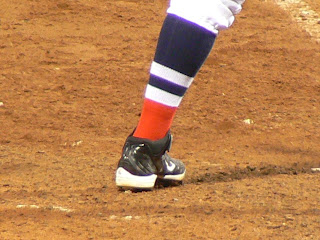 A close-up of Cody's left sock/foot. So great to see this color-scheme on the Red Sox' ankles again. I wish they were stirrups, but I'll settle for this classic pattern that we essentially wore from the 30s to a few years ago. 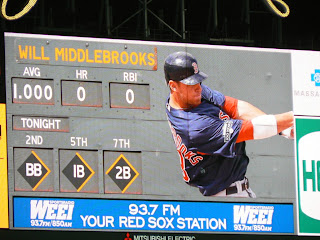 Will had a great night, with a walk, a single, and a double. Another nice pitching performance turned in against us, and another 9th inning with the tying or winning run at the plate. I wish we could have busted through at least one of these two nights. Instead, we end up losing 2 of 3 to Oakland. God effing damn.

Another interesting crowd dynamic tonight. Because of the cold, you had people leave early. So between the more boisterous fans who moved down to good seats and the fact that people were doing anything to keep warm, it was pretty loud in those last few innings around home plate, as everybody really tried to get the offense going. It's always good to see the crowd get into a game. The people who normally sit in the expensive seats should take a cue from the people who sit there when they go home. All of us who stayed made the best of a crappy weather night.

The Orioles, who shut out the Yanks tonight to win their series in the Bronx and move to 16-9, come to town for a weekend series after tomorrow's day off. I just read that Jered Weaver pitched a no-hitter tonight for the Angels....

Comments:
At least they didn't play the far-worse song, "Billy Don't Be a Hero"...

I would be happy with any Sox socks color combination (except the blue alternate roadies from a few years ago), as long as players would pull up their cuffs and show them. - daddybcat

Wait...why would you move from Section 36?

daddybcat: Yeah I'd like to see some socks again. Even when teams wore those 70s jammies they still had the stirrups! Now they're (mostly) just gone.

Q: Yeah that one's pretty bad too. I'd like to hear Billy's Got a Gun by Def Lep but I doubt anybody knows that one.