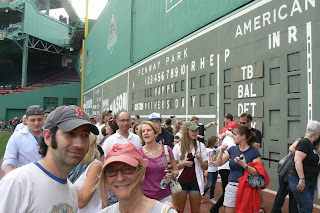 Mom and I (and a bunch of strangers) on the Fenway field on Mother's Day. 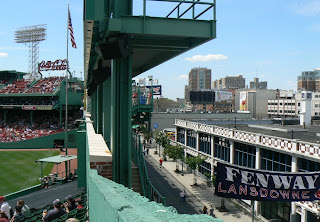 Parked for 0 dollars on the street just outside the $40 lot. Oh the price people pay to take fifty fewer steps and have a slightly better chance of not getting their side mirrors scratched.... Had a pretty sweet view in section 36 for just $12, too. We had the coveted two-seat row against the back wall. I gave Mom and Charlie the seats and just stood/kneeled in the little space next to them. Standing actually helped me get some of the breeze, which we needed on this hot day. Above, a half 'n' half shot. 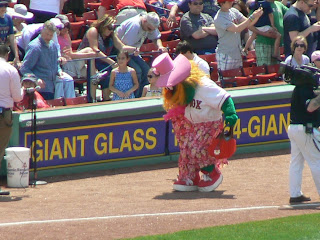 Wally's mom was there, of course. 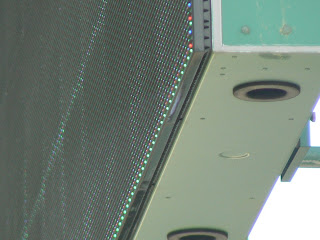 I don't know what kind of sorcery is behind the scoreboards, but the edges of them have these...lit-up...dots. 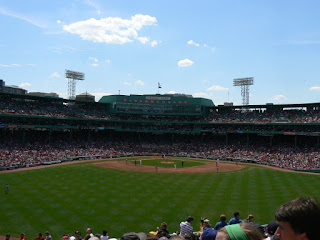 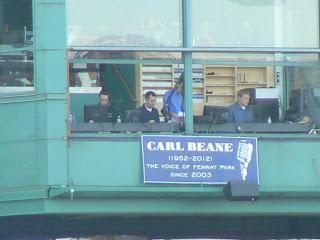 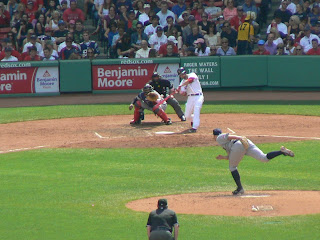 Everybody had the pink stuff today. Cody Ross misses this Justin Masterson pitch with his pink bat. I knew a long time ago we'd have a 40% chance of seeing either Lowe or Masterson. Glad we got one. Always good to see my former favorite Red Sock--I wasn't sad that we scored 4 off him in the first (after my mom predicted a two-out rally). 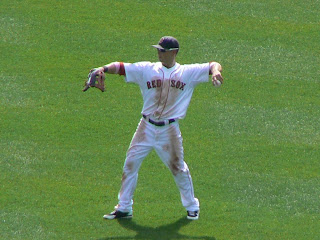 Daniel Nava is 6 for 10 with Boston this year, and is dirty. 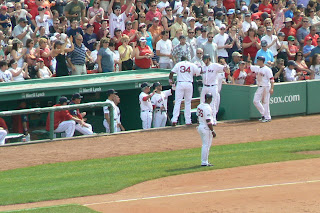 My mom has a dog named Salty, whose full name is Saltalamacchia. So we were glad to see the human Salty homer and knock in 5. We also had a great angle on Middlebrooks's rocket dong (and all the other long hits to left). 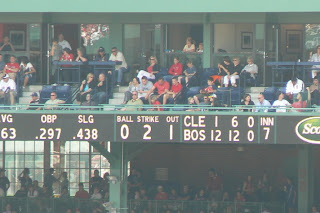 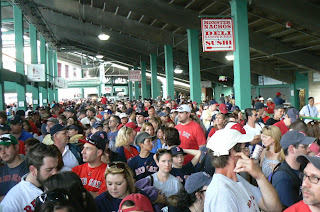 And the blowout made it possible for us to go line up under the bleachers for the annual Mother's Day "Walk in the Park" without missing any important stuff. (We did miss Mauro Gomez's debut, seeing it only on TV while we waited.) Above is not a crowd, but the (really wide) line itself. 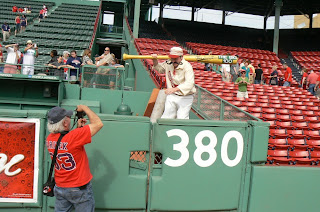 We entered the field through the center field door and were sent clockwise. Big League Brian was in his old-school get-up. 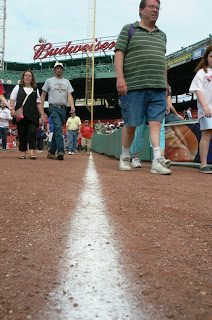 Looking right up the foul line to Pesky's Pole. 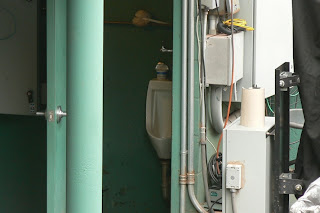 That urinal in the vistors' dugout. 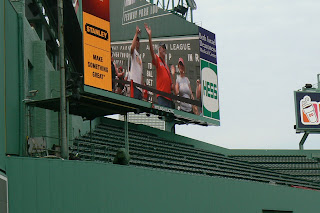 It was tough, but we finally managed to get on the scoreboard while also taking a picture of it. The three of us ending up doing the three different things you can do in this situation: Mom's waving at the camera, Charlie's waving at himself on the board, and I'm taking the picture. 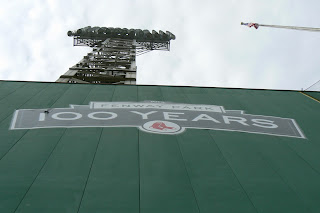 Another shot of that 100 Years logo--but now there's a mark on it, as if a ball nailed it. Look closer: 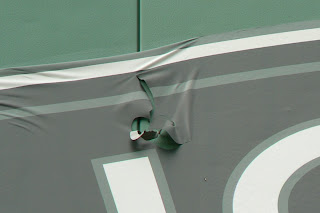 I don't remember it happening during a game. Could have been from a fungo or BP hit. 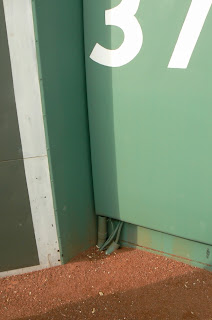 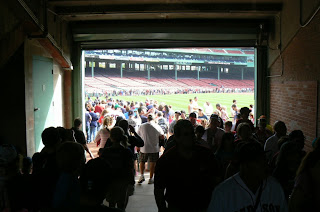 We spent a long time on the field--still, when we got back to CF, a whole other set of people were just being led out there. Staffers gave out flowers to the moms as we left the ballpark. Oh, and we saw Gammons get into his Benz as we walked through the parking lot. Kim was selling soap at a market in Boston so she was able to meet up with us for the post-game dinner. Great day all a-proverbial-round.

Comments:
Great pics, Jere. They capture the day. I love the picture on the scoreboard.

I will have to get my photos published; I only had my camera phone but I still got some decent shots of the park from field level

Kat--thanks. Yeah I thought that scoreboard things was really cool! It was hard trying to figure out where each shot was and if we were close to being in it, but then the guy who was actually walking around with a cam got right near us so we knew we had a chance.

FenFan--Nice, I look forward to it.