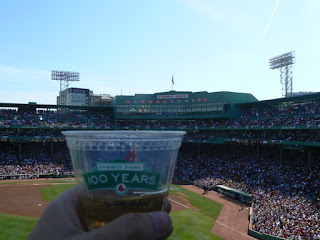 Fenway's 100th on the Monster! With my mom and Chuck, Anne and Ian, and Joanna who you know from her blog, Empyreal Environs. 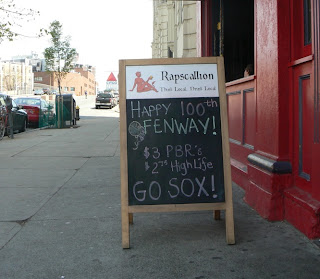 On the way in. The point was to get the Citgo sign in the b-ground. 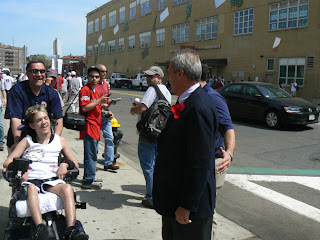 Got to the park, and there was Larry. As it turns out, most of the employees also wore a rose. 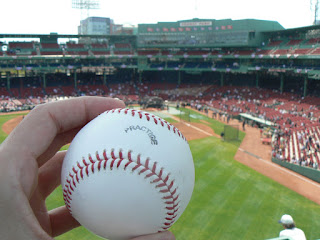 I got a ball early, taking the pressure off for the rest of batting practice--we were right in the power alley and balls were flying at us left and/or right. The wind was whipping straight out to left, too, turning an otherwise hot day into one where I was glad I brought a jacket. Which I'd only done so I could have something to reserve spots along the rail. As you can see, this is a Yankee practice ball, not one of the 100th birthday balls. We were under one of the signs, so as each blast would head for us, I had to make the call to stay in the back or assume it would either hit the sign or land in the seats in front of us. Made the call to head for the stairs, saw the ball headed for row 3, let it slam in there, and dive right in. I narrowly beat out two other people and got this ball, which was hit by...Derek Jeter. My 18th lifetime ball. All BP. 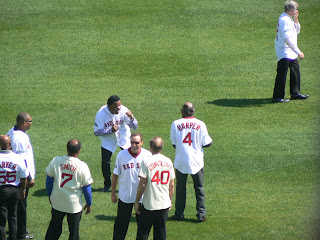 As you know, every living ex-Red Sox was invited. I'll spare you the million pics I took and just show you a few. Above, Pedro. We couldn't see the main scoreboard, but I don't think they showed any names, just close-ups. So we had to use our knowledge to figure out who was who. 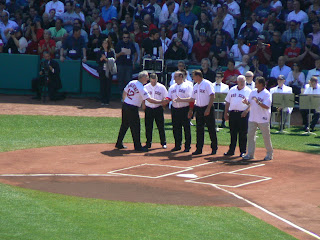 Gedman and his catching buddies. At first each guy came out of the CF door and went to his position. Also in this pic is Bob Montgomery--and Carlton Fisk didn't get the "black pants" memo. 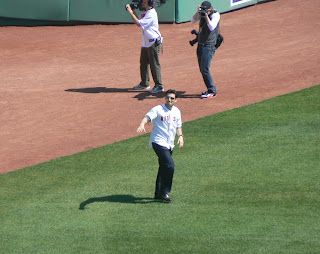 I was proudly wearing my Nomar shirt today.... 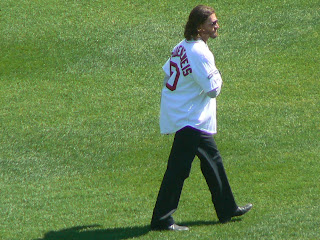 Took me a while to figure out this Jesus-looking guy was Scott Schoeneweis. 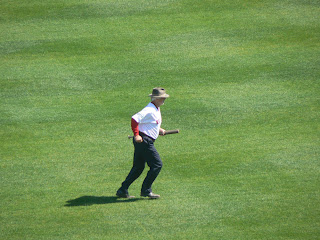 Even with his bad knees, Bill Lee was the only guy I saw actually run. 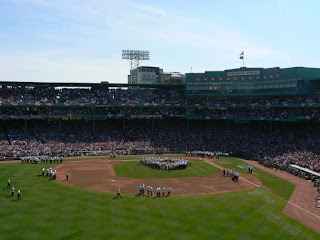 Everybody at their positions. 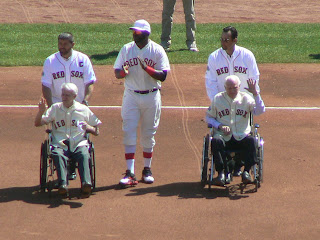 Tek and Wake walked Pesky and Doerr onto the field, with Papi between them. 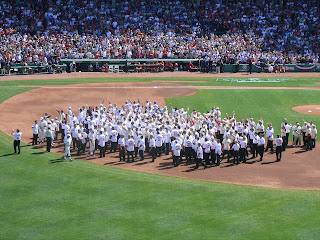 Then everybody came together around them. It was fun to see all these guys. I'm sure the radio will tell you how stupid it all was and make fun of it and tell you how the owners just want to make money off you, but we all had a great time. 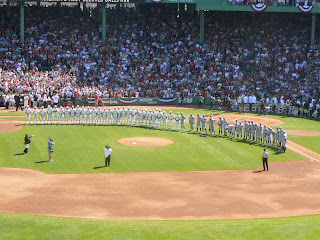 The day before at the open house, I was at the Royal Rooters club and saw a pic that showed the players at the first game at Fenway and then the players on the 75th anniversary, which was Red Sox-Royals. I knew they were gonna line up today's teams in the same way, straight across in front of home plate. Here's the 1912/1987 thing: 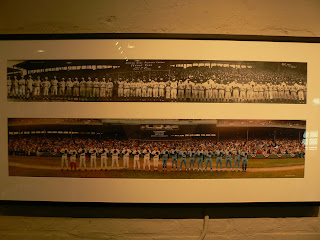 Here's Millar and Pedro during the world's largest toast:


And here's the flyover, which had a WWII plane: 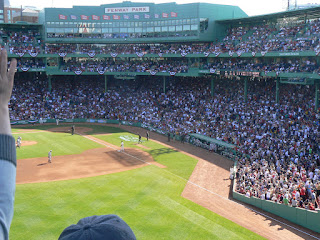 We had a good early moment when Papi hit a dong--here's the moment the umps came out from their review and called it a homer. But the game mainly was shitty, as the Yanks kept hitting dongs. 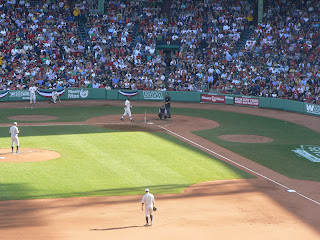 Another good moment was seeing a bat left standing up. 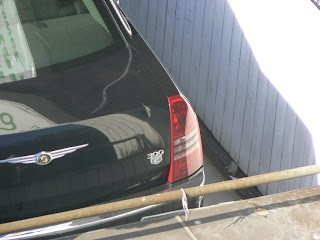 This was looking down behind us in the parking garage--see the dent A-Rod left in this car? 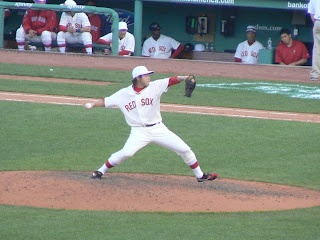 A look at the 1912 throwbacks. Tazawa on the mound. 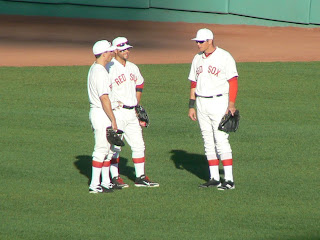 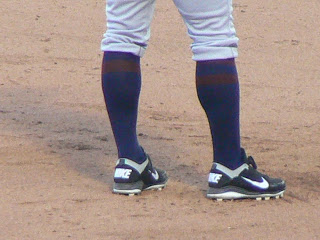 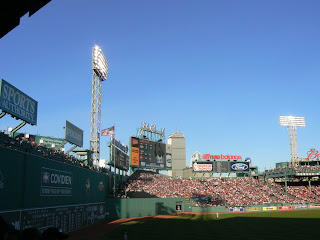 At the very end, we moved down and got out of the wind, which you can tell is blowing out like crazy if you look at the flag. 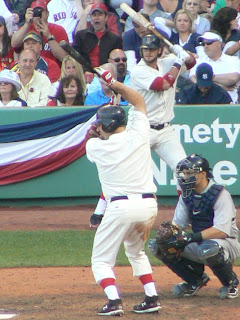 Youk and Salty with parallel bats, and a yawn in between. 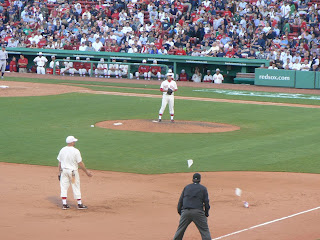 The wind caused a garbage tornado at one point. 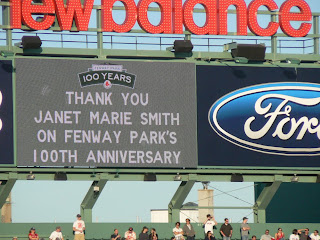 So as of the day before, all three boards were made up of all "screen," meaning their entire faces could be used to show vids/pics. Now the RF one seems like the ads are physically there, as they never disappeared all day, and as you can see here, appear as if they've been place over the sides of the board. (Also, yay Janet Marie Smith! Just a coincidence I got someone cool on there for this scoreboard example.) [Update: Boy was I wrong about this. That RF board ALWAYS had a physical ad on each side, going back to the day they unveiled them. Don't know what I was thinking there.] 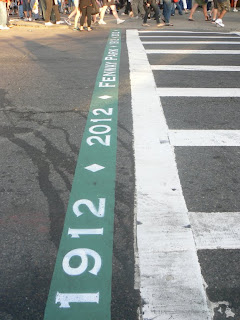 On the way out, a crosswalk leading to Yawkey Way.

Here's some random footage that shows the Yanks' throwbacks since I didn't get great shots of those: 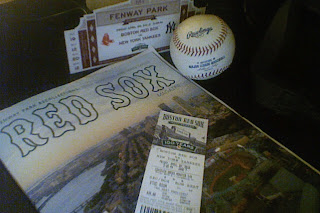 Comments:
What was the deal with those lanyard things that everyone had (the ticket from which you have at the top of the last picture)? Were those free? Because if so, I'm annoyed I didn't get one. Don't know what I'd do with it, but I never want to miss free trinkets...

They were passing those out when me and Joanna came in, right after gates opened. The other four people I was there with got there much later and got nothing. So it was probably a "first 10,000 fans"-type deal. As for the lanyards--I don't know! Are there people who walk around with those things and just any time they're given a commemorative ticket they just loop it on there?

Incredible! I am so sorry I missed all this. My fanhood has waned somewhat but I really, really wish I could have been there. Is it true that Keith Foulke was there? I hope you had a killer time!

Great stuff, Jere! As a point of Interest, they had on the left scoreboard, the position, an old picture from their playing days and their name listed for each player as he walked out. It was pretty cool (and helpful!). We got lanyards and commemorative tickets when we got there (about 1pm or a little after that).

I really, REALLY enjoyed the heck out of yesterday. (And, Jenks, Keith Foulke was not only there, but smiling the entire time!)

I had SRO in the RF roof box area, basically under the Cumberland Farms sign. Did Green Monster SRO get the Welch's for the toast? RF roof SRO did not. So when the whole ceremony had finished and they were ready for the toast and the row in front of me was still empty, I snuck down and took one of the unused ones. (I waited till someone else went first, then I took one.) I was thinking, "How could someone have a ticket to this game and not be in their seat?" Um, because it turned out that section had a lot of the former players seated there. I think I took Chris Smith's grape juice! Spotted in my section were several of the S's: Phil Seibel (wearing his '04 ring), Bill Selby (whose kid was a very enthusiastic pro-Red Sox, anti-Yankee supporter), Danny Sheaffer (who stood next to me in SRO for 1/2 an inning so he could chat with Selby), Chris Smith, Pete Smith, (no Reggie Smith in my section, although he was at the ceremony), Jack Spring, and Marc Sullivan (who I sat behind for the final two innings).

It was a beautiful ceremony and a fun, fun day!

Whoa, just realized I can actually see myself in the picture you took of the players all lined up like the 1912 photo. Weird.

JenkS: Yes, Foulke was there. And yes, SS.

Cyn: So I guess it went "lanyard and ticket" at first, then down to "just ticket," then down to "sorry." Thanks for letting me know the other board had names. Makes sense.

RSDH: That sounds like fun--I guess they sat them alphabetically. Thanks for the list. I'd like to make my pic of all of them into one of those pics where everybody's numbered and there's a key below. GM SRO had LOTS of cans. There were extra! Maybe we had yours!

Ryan: Cool. As you know that's probably my favorite thing about the Internet. Seeing yourself in someone else's picture who didn't know you'd be in it, or didn't know you at all.